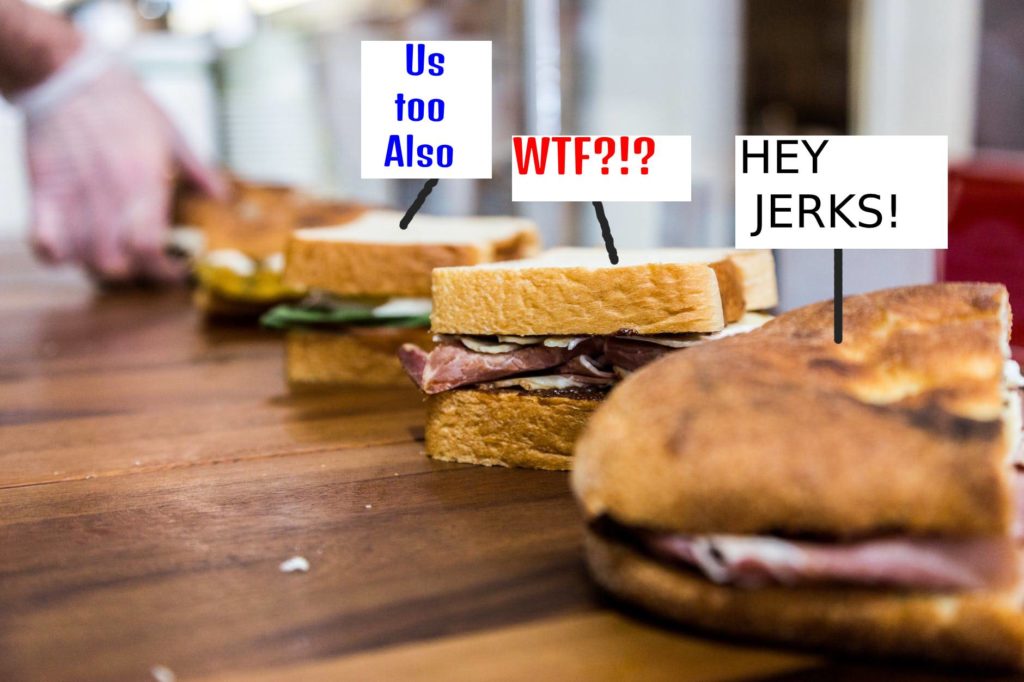 The nation’s sandwiches have set aside their various differences to join in a non-partisan movement in order to be politicized. The disparate group organized a rally outside of the federal courthouse in Tampa yesterday afternoon.

“We’re sick and tired of not being fought over for political reasons, like literally everything else in the world,” said a footlong Chicken and Bacon Ranch Melt with spinach, tomatoes and light mayo from Subway. “We’re here, we’re delicious and we will not disappear! Until you eat us.”

A local traditional Cuban sandwich, with no lettuce, tomato or any other bullshit on it added, “There’s nothing you people can’t turn into a huge political battle. Football players and the National Anthem. School shootings. Now, even a global pandemic that will kill you regardless of how you vote. Meanwhile, the closest sandwiches have come to a socio-political controversy was the whole Popeye’s debacle, and that broke down along racial lines. We want our due respect!”

A pastrami on a nice rye with spicy mustard chimed in, “There’s plenty to disagree with. Maybe you hate baloney. Fine. Blame it on Bernie Sanders! Maybe salami nauseates you. Trump probably loves it! Hell, I don’t know. None of the candidates ever talk about their favorite sandwiches! We’re here to say no sandwichation without representation.”

While the group is comprised of several culturally diverse elements, not all sandwiches are backing the effort. A Number 3 TOTALLY TUNA® from Jimmy John’s says, “I can’t speak for other sandwiches, but our founder is a big game hunter and we suffer political blowback from that all the time. I just want people to enjoy me on the merits of my smooth, creamy tuna salad, cucumbers, lettuce and tomato on an individual’s choice of a French, 9-Grain or Thick-Sliced Wheat roll. Hell, even as an Unwich®. I’m a sandwich, not a cause. Politics shouldn’t matter!”

The rally was peaceful at first, until several homeless people found out about it and showed up to eat the sandwiches. Tampa Mayor Jane Castor said, “There’s nothing in the constitution nor any of the city charters that say sandwiches don’t have the right to assemble and express themselves freely just like anybody else. But there’s nothing that says people can’t eat those sandwiches either, so…”