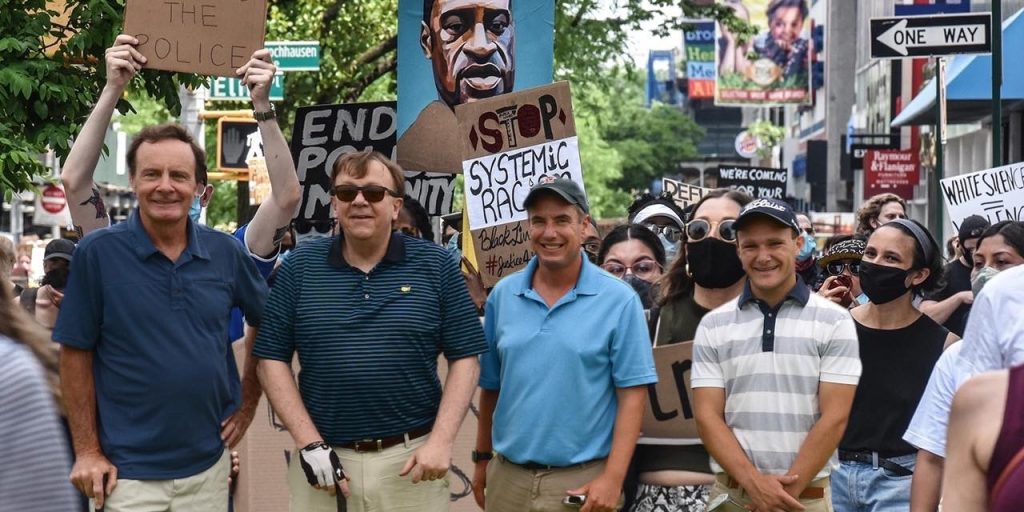 Terry Galway, Evan Mephisto, Kreeger Brunswick, and Terry Galway Jr. have solved racism after talking about it for a little while in the clubhouse of Alabaster Pass Golf Club in Pasadena, Wisconsin.

“If everyone just dates interracially, then within 1 generation, every child will be mixed.” Said Galway Jr. confidently, with one hand on the side of his mouth as if he were passing along a secret.

“All children will be mixed race which means it will be impossible to be racist because we will all be one race!” Galway Jr. said with a wide grin as the other 3 men stood behind him with their arms crossed, watching in admiration.

“You’re right. If we’re all one race there will be no more racism, and future prejudice will be solely based on gender, sexual orientation, economic class, and geography.” I nodded.

Galway Jr. didn’t like this and got annoyed that I acknowledged there will still be other forms of oppression.

“Those don’t matter!” Galway Jr. sneered, and turned back to his father and the 2 other men.

They all shook their head in shock, kind of like, “don’t listen to that guy what does he know.”

Then Galway Jr. turned back to me and said, “Racism is the worst, and once we fix racism everything will be fine and equal!” He shouted in my face.

Galway Jr. and the men behind him all celebrated their victory and cheered.

“You’re an idiot!” Galway Jr. pointed at me and laughed.

Galway then died from a sudden, stress induced, case of affluenza.

The doctor who arrived on the scene checked his non-existent pulse, dropped the boys arm, then said, “Yup. He’s too rich to live, the affluenza just took him right out of the world.”

The 3 men who had been standing behind him had gone back to playing the back 9 of the Alabaster Pass Golf Club course.

I was asked if I would speak at Galway Jr.’s funeral because I was the last person he had talked to, and they didn’t really know any of his other friends to ask, so I did, and I said, “Galway Jr. was a low-life dirtbag piece of s**t.” To a crowd of gasps and murmurs.

“They say you shouldn’t talk ill of the dead, but in this case I don’t care, that kid was awful and the world is a better place now that he’s gone.” I said, as a slapped my hand down on the podium very flatly and loudly, causing a jolt in the audience.

Then one of the guys who was at the golf club stood up from the back.

“I was his dad, and he solved racism! He’s good!” The man shouted.

(But it wasn’t the man that Galway Jr. had continued looking back at so I was confused. Why was Galway Jr. constantly looking at a different guy for reassurance and support? Whatever.)

“It doesn’t matter that he solved racism!” I yelled back across a stunned funeral party.

“It doesn’t matter if you have good ideas, if you’re a bad person!” I said, and right as I said it, time stopped and a large spark of light erupted in the air and a being appeared.

“Congratulations John, you’ve had the most basic, profound thought of all time, which was actually the key to existence and humanity, you win!” Said the beaming being.

“I’m the magistrate, I oversee worldly spiritual matters, and you have just elevated the consciousness of all humanity with your words so I’m here to acknowledge that achievement.” The magistrate smiled a wholesome grin.

“Ok. So what now?” I asked, shrugging my shoulders and holding my arms out.

“Just letting you know.” Then the magistrate disappeared and time continued on, the funeral party not being of witness to what I had just experienced.

The funeral party clapped, then a woman stood up.

“I’m Galway Jr.’s step mom. I think you’re correct and I agree that Galway Jr. was actually bad. You’re good! Not him!” She cheers’d me with her champagne glass, poured the contents into her mouth, then threw the glass out of the procession home window.

“Alright, this is all very nice, but you’re all starting to make me nervous.” I told them.

Then I laughed as quickly as I could before they got even weirder to me.

So anyways, racism is fixed.