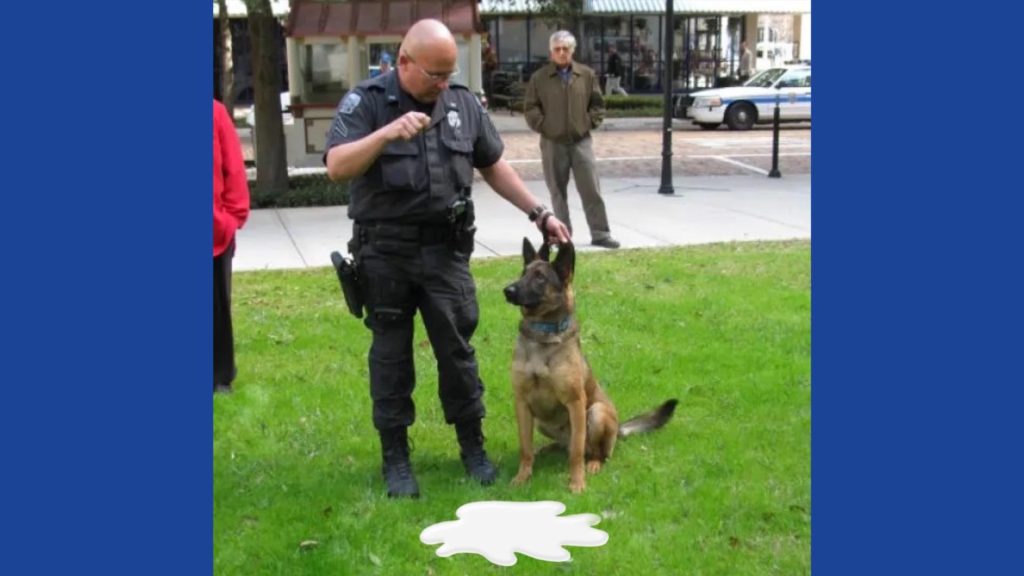 “Sex criminals leave semen and usually it’s hard to find, but now not only can dogs sniff it out, but they can identify who’s semen it is.” Said Police Chief Huck Nazel.

Nazel continued proudly patting the dog on the head while the dog panted heavily and happily.

Suddenly the dog started sniffing the air and barking.

“I think he’s got a scent of some ejaculate!” Shouted Nazel,  unleashing the dog.

Clyde then galloped off as quick as it’s tiny legs could pump, busting down the nearest door at the convention center, which is where the dog press conference was taking place.

The dog sprinted to a bucket in the corner of the empty room full of a white substance.

Before Nazel could hobble over to the cum-filled-bucket (He has a bum knee), an unidentified man ran up and scooped the bucket and scurried off.

“What the hell was that?” I turned to Nazel and questioned.

Nazel scratched his head then unlatched his gun on his hip, pulling it up and pointing it in the direction of the character which ran off with the bucket.

He began blasting in the general vicinity of where the character might be and the dog barked at the top of it’s lungs.

Some other stuff happened, but I had to take a dump really badly so I left the scene without following up with the shooting and the bucket full of man juice. I’m sorry. It seemed like a hectic thing, there was probably more journalism that could’ve been done. I’m not perfect, no one is. If this gets me fired so be it.

I know I’m already on thin ice ever since I tried to “me too” my boss. My boss told me I needed to perform a sexual oral act on them or I would be axed.

And then I did it a few more times because I developed feelings and I liked them.

But ultimately they used their power over me to manipulate me which is wrong, so I know I needed to talk about it.

Me disclosing this information right now will most definitely get me canned.

But my family were chairman on the original board of Tampa News Force so I still have some of my own strings I can pull to stick around here if I really want to. Nepotism is alive and well, especially in the TNF offices. Is it right or wrong? I don’t know, I don’t think about it too much. I just try to enjoy life a day at a time.