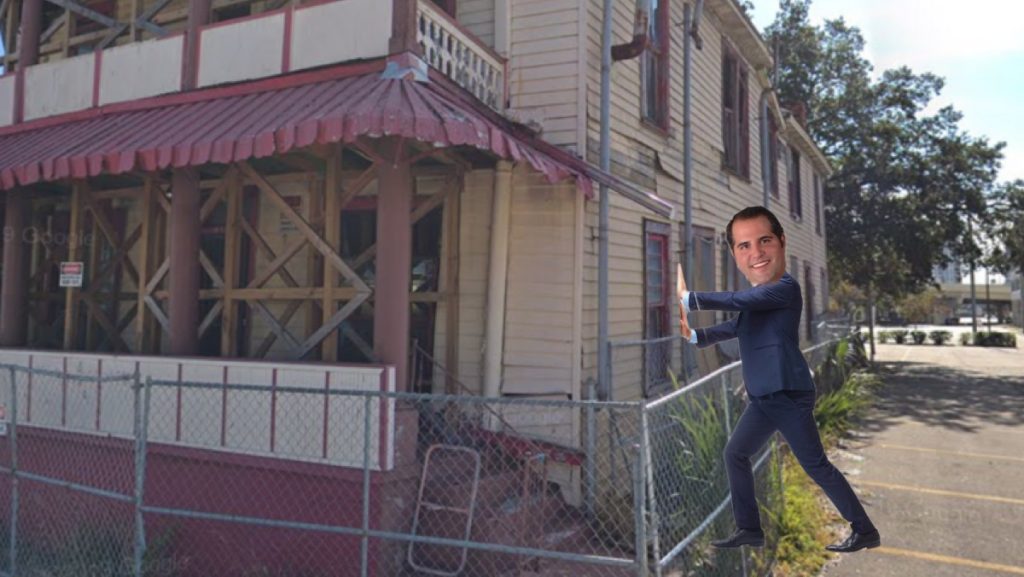 Eye witnesses are claiming that Jason Accardi, President and CEO of 717 Parking Services Inc., was recently seen trying to knock over the historic Jackson Rooming House in downtown Tampa by leaning against it, a charge he vehemently denies.

“Yeah man, he was pushing hard against it and grunting, ‘Come! On!'”said Jasper Heaves, one of the witnesses. “It was pretty obvious what he was trying to do.”

“That’s absurd; I was obviously trying to hold it up,” said Accardi. “Everybody knows one man can’t make a building fall down, even a man who does whatever he wants and nobody, especially the City of Tampa, ever dares to say shit about it.”

The Jackson House was constructed in 1901 as a boarding house. It provided accommodations to African-Americans, including performing artists like James Brown, Count Basie, Ella Fitzgerald, Ray Charles and Cab Calloway. It has been mostly abandoned since 1989 and has fallen into disrepair. In 2007, it was added to the National Register of Historic Places and efforts over the years to restore it have thus far failed to produce results.

Among many things that need to be done to restore the building is upgrading it to meet modern city fire codes, which includes a 10-foot easement between it and neighboring properties. The owners of those properties are Jason and John Accardi, who refuse to yield, in spite of the fact that this would actually add square footage to the properties they already own.

“Sure, that’s true, I guess, and that would be nice. But if the place were to finally fall over, God forbid, how much even more square footage would we stand to gain?” said Jason. “Once they haul off the worthless debris, it would become a parking lot and of course we would have it. But gosh, let’s hope that doesn’t happen, even though it definitely is going to happen sooner than later, especially when we’re actively hindering the restoration efforts, right? Right. Because, golly gee, that would just be a real darn shame.”

“Everyone knows how much we love this city and that we would do anything we could to benefit the community, except for anything that runs counter to us making one more buck from it.”