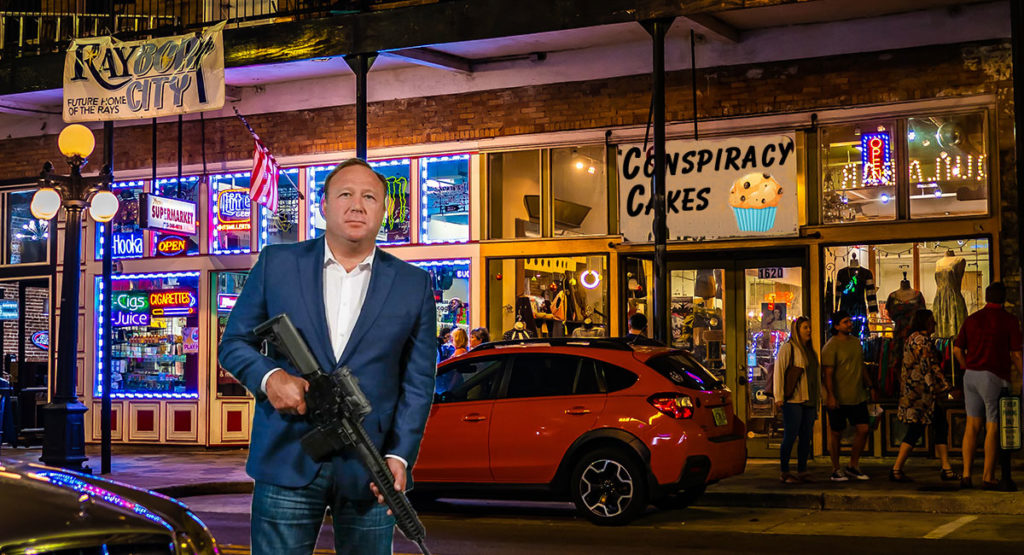 Controversial web show host Alex Jones had a soft opening for his new muffin shop “Conspiracy Cakes” on 7th avenue in Ybor yesterday. The bakery features an assortment of goods that come with conspiracy theory brochures attached, ranging from the JFK assassination debriefings attached to a lemon marang pie, all the way to a flip book of a suicide bombing alongside a double-fudge chocolate brownie muffin. The store is meant to raise awareness to some of Jones’ most notorious theories, while also serving up high quality baked treats.

“Ever since I got kicked off most social media platforms, it’s been a lot harder for me to spread my messages about the government secretly doing really awful things to their own people, I’m assuming that’s why I got banned, because my truths were too incriminating for the elites. I scared them! And it makes me jacked!” Alex Jones said as he ripped his shirt off and started deadlifting baking trays.

People lined up around the block for the soft opening, insisting they were buying the muffins “ironically” and that this kind of stuff would be worth money on the resale market because of it’s ridiculousness.

“Oh yea, one of these Alex Jones cake wrappers will definitely go for four or five times the market value online, this is like that Travis Scott box of Reese’s Puffs, but for crazy conspiracy theorists. I’m telling you these people are sick!” Said Pempkin Squabblenuts, resident of Tampa Heights, waiting in line for a muffin.

“Hold on Mr. Pemberton! I’ll feed you in a moment!” Squabblenuts said as a ferret climbed up his shoulder and started nibbling on his ear. “I told you! I must buy this muffin, then we can go home and roll around on the orange shag carpet!” Said Squabblenuts.

I decided I was tired of writing this article, so I got real off track.

“Oh great, not this again.” Thought the readers.

“If I had a dollar for every time this a**hole got off track in one of his stories, I’d have at least a couple hundred-so dollars, because this kid never finishes a story or a train of thought in any sort of elegant, logical, manner. You have these thoughts, but they never lead anywhere, and they don’t accomplish anything.” The reader said out-loud while reading this article.

You know what, never mind. Journalism is a conspiracy. But you wouldn’t even sit and listen to my theory because you have it so dead-set in your head what journalism is, that anything that challenged your concrete concept of journalism, would automatically be considered a crazy conspiracy theory, because you can’t break free from the simulation.

You ever talk to those people? The people who say things like that? Isn’t that exhausting? You’re like “Jeez, yea thanks Frank I really wanted to hear about quantum ghosts you f***ing Jagoff.”

Sorry, I thought this was one of my jokes notes on the computer, this was actually a TNF story about Alex Jones muffin shop on 7th avenue. Which is real by the way! Don’t let the fake news format fool you, this is hardcore REAL news. The realest, rawest news there is. You like news? Yea I bet you do. That’s why you’re f***ing reading it right now. Congrats buddy, pat yourself on the back, because you’re reading the news. Feels good doesn’t it. You know. Reading the news and all. You probably never thought you’d see yourself here one day.

But here we are. Here. And there’s no going back. Only forward. And today’s the day we make that dream come-oops. Just realized this wasn’t my inspirational quotes note, this is still that real news article about the… dog sex change studio? I ‘m sorry, I forgot what it was, but the note is so long, that I can’t see the top few paragraphs so I forgot what it was I was writing about. That’s just the nature of the game. Sometimes you’re too far to look back. Oh wait, no this is my inspiration note, I think someone accidentally copied and pasted part of a TNF article into my inspirational quotes not. That must be the case because what I’m seeing is a majority of the inspirational stuff, and a lack of the real *cough* (fake) news.

Alright guys, it’s late, we’ve wasted enough time. Again, please don’t tell my boss I’ve been writing articles this way, he’s had it up to here with me and if I mess up again I’m toast. I really shouldn’t even be risking any of this right now I’ve got a few kids on the way. I sell them beer. Some kids come by and I sell them beer illegally. That’s what I meant by that statement. Alright, goodnight. Peace.