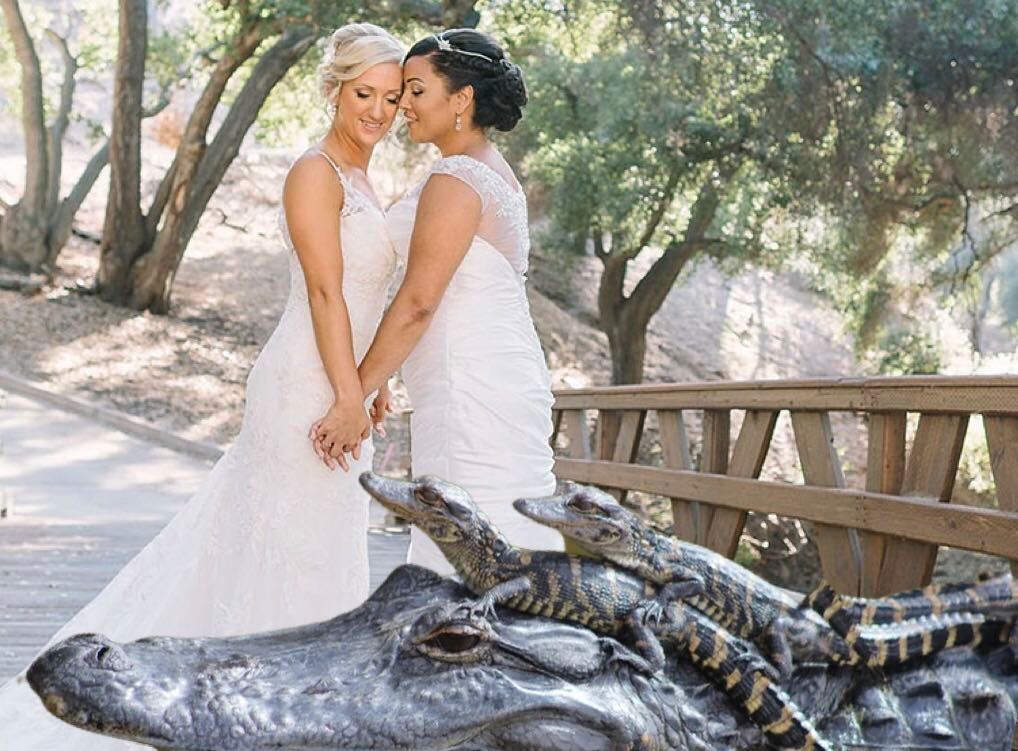 A 400-pound female alligator named Bessy gave birth to 2 gator babies during a ceremony of a homosexual marriage between two women named Margaret, on a golf course at Frederico Beach last Saturday.

The birthing, which was not coordinated with the wedding, happened to occur right at the moment when the pastor said, “You may now kiss the bride” off in the distance the sound of a new gator sliding down a watery birth canal interrupted the ceremony.

Margaret let out a loud laugh while Margaret shortly followed after that, causing a domino effect amongst the audience leading everyone to burst out into laughter.

“We’re going to name the Cambodian child we adopted ‘Gatory’ after the gator that gave birth during our wedding.” Said Margaret.

Bessy the alligator is a house pet of a resident of the golf course which had wondered onto the grounds. “We rang the gator bell from our balcony when we heard she had interrupted the wedding, we were so embarrassed about that.” Said Etnee Niaga, owner of the estate located on the course.

“It’s nice to live on a golf course because I can pretty much do whatever I want out here and I’m surrounded by rich people playing this very slow party sport which is basically a glorified bar game, so I feel pretty safe. And I know golf itself isn’t inherently a rich sport, this course is just particularly expensive, so I know it’s rich people. I’m rich.” Explained Niaga.

I believed her. And I hadn’t asked her any questions, she came up to me in my office while I was writing this article. She was on the street below I saw her out the window and she kept motioning to me saying something incoherently so I cracked open my window and yelled “What!” And she kind of begged me to let her up here, I was 60-floors up which is why it was so impressive she got my attention, she was being really loud and crazy I had to intervene.

So yea, she came up we had some drinks, I interviewed her, it went well, obviously, I mean you saw the results. That thing is cold. Pulitzer in the bag for sure. At the very least. I might get a movie deal. Book deal. All that. The whole 9. And I deserve it. Because I’m a great writer. The best some say. A lot of people are talking and they keep saying, “he’s the best, he really is, I mean how can you beat that.” As they motion towards me. They’re not trying to hide the conversations they want me to hear it. So I remember them when I’m up there. At the top. #1. Alone. At the peak of the mountain. And I look at my material possessions and I go, “Look at my shit.” Doing a James Franco Spring Breakers impression. And I love my stuff, and people love me, and I have intercourse where and when as I please.

All because of fake news article interviews with Etnee Niaga. That’s why. But I digress.

Anyways, gator puss popped out 2 lil’ gator-tots on a golf course during a same-sex marriage of two women named Margaret. Also they were biologically men but had mailed out a preferred pro-nouns packet weeks prior to the wedding so we all made sure to respect their wishes and refer to both of them as women, even in the fake news article, and it is legal for me to explain that that was the case, because there was a clause at the end of the pro-noun packet that said, “Only in the final paragraph of a fake news article can it be revealed that biologically we are men and have chosen to be referred to as women because that’s our Bobby Brown prerogative, so that’s what we’re going to do.”