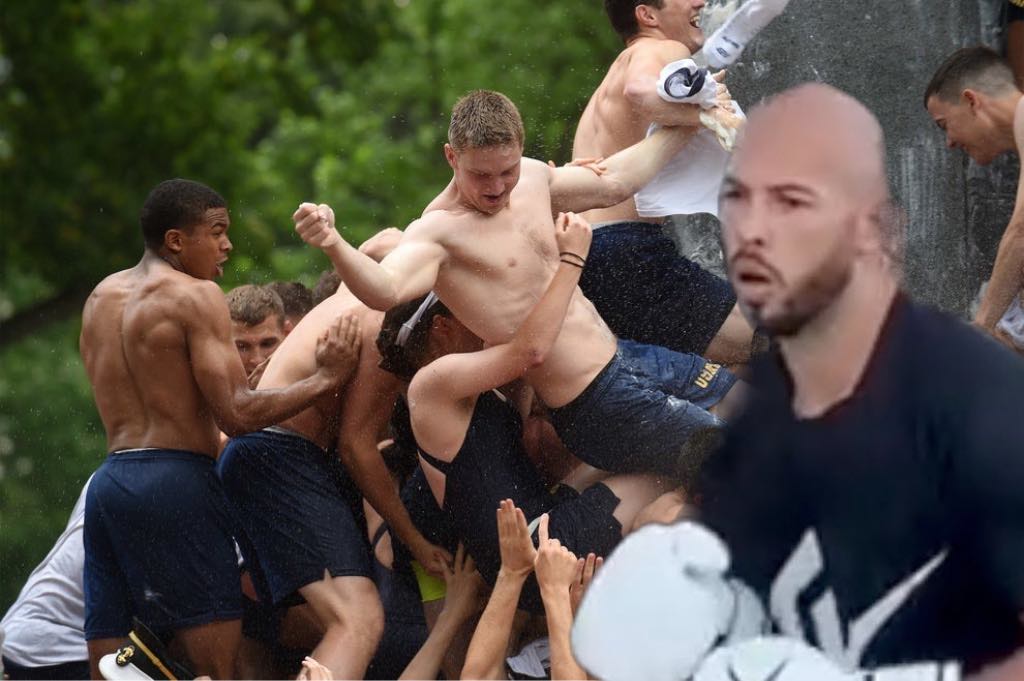 “We sucked we f*cked, the whole shebang.” Said Tate.

I’m sorry I can’t even write this, it was over before it even started. The headline is the only funny part, there’s no reason to expand, the headline is barely even funny as it is, the more I look at it up there the less it entertains me. It might be because I’ve written a bunch of these in the last few days. Some weeks I go without writing at all. Then some days I write 10+ in a row. And I somehow still have this job!

I think it’s because some weeks I’m focused on video stuff, then when I get tired of cutting video I turn to writing, then I turn to stand-up writing (I’m a stand up comedian (sure you are.)) I try to keep it balanced or at least different enough on a weekly basis that I don’t get too tired of one thing. I’m definitely tired of writing now. It’s pointless. Only a few people will read this, if that, but I like to believe one day this will be worth something. Even if it’s just used as an old journal to see what I was up to in 2022. “What was John Jacobs doing at the end of 2022?” This. This is what I’m doing. Writing fake articles about Andrew Tate’s homoerotic sparring session. Is it wrong? Is it right? There is no answer. It’s what I’m doing with my time. We only get so much time on this earth, and when I’m gone, maybe I’ll get to look back at what I did, and I’ll see myself silently sitting at my table at 1:42 am, writing this article. Even calling it an “article” is generous. It’s more of a… I don’t even know.

I don’t know why I constantly slight myself with these side-notes. I think part of it is it’s funny to doubt what I’m doing as I’m doing it, and also I get to hide behind a vail of sarcasm and act like “oh, you know, I don’t really care, it’s all whatever, ha ha ha, life is what it is.”

Why do I care that you know I’m washing my sheets.

That’s how defensive and paranoid I am.

I think, “If they know I’m washing my sheets, they’ll somehow use that against me in the future.”

I assume the world is after me even though I’d say 99% of the time, the world seems to be neutral or positive towards my actions and there seems to be a resting-vibe of peace and happiness. Because that’s what I emit.

But I’m still scared every day is my last.

I think someone’s going to hurt me every day, and I’m sure that stems from issues throughout my whole life, which if you had to deal with too, you would understand where I’m coming from, but I know it sounds unreasonable to the average person.

But I’ve had to deal with a variety of things over my years which have led me to be this way. Oh well. I hope it changes one day! I pray for peace and safety every night. And I have been safe. But still, despite the continuous pattern of nobody killing me, I still think at any moment I’m going to hear banging on my door and someone is going to break in and hurt me. And they say you shouldn’t even put any thought or energy towards something like that, but I want to be ready. I’be played out the scenario of someone breaking in numerous times, I imagine what I would grab, what my plan of defense would be. I wonder if I would freeze. Part of me think I might just s**t my pants and the person would easily overtake me. I really don’t know what would happen. And I won’t know until that happens, which I vehemently pray it does not.

Anyways, sorry for having you read all that nonsense about me when you expected an article about Andrew Tate having gay sex. I apologize.

Sometimes I stick to the topic and write the article! You’ve seen it! It’s not always like this! It’s like 30-40% like this. Which is pretty high but it’s not awful. I like to think it’s slightly entertaining to someone. I have yet to see proof that it is, but I have faith. One day this will be printed out and be posted to the wall of a museum! Now THAT would be shocking. The funny part is though, (oh, now there’s a funny part? Finally) I really do believe it could be put up in a museum. The same way I’m scared someone is going to come hurt me, that’s the same level of confidence I have that this could be up in a museum. In reality, odds are, both of those things will never happen in my life time. But I still believe.

It’s scary sharing my deepest fears like this through this, but again, nobody reads this, so I have a better chance of putting this in a glass bottle and throwing it in the ocean and having it seen than leaving it here. And I am definitely leaving it. Right now. Good bye. Enjoy this thing of writing I left here for you! Burn it if you want, I don’t care. Smash it, tear it up, throw it in the garbage. You can’t take away the fact that it existed! You can erase it, but at one point in time, it existed! Just like you! Just like the world! Just like Jesus… Oooo, now that’s something to think about. Jesus existed. And this article existed. Coincidence? Maybe. That’s up to the universe to decipher. Ok those sheets are probably done. And tangled for sure. You can never wash sheets without them all getting stuck in the fitted sheet and they’re all still wet and you gotta dry them again. My computer screen is shaking again because it’s been one really long paragraph. Ok, I’m going to go check on my sheets… I mean, my not-sheets.