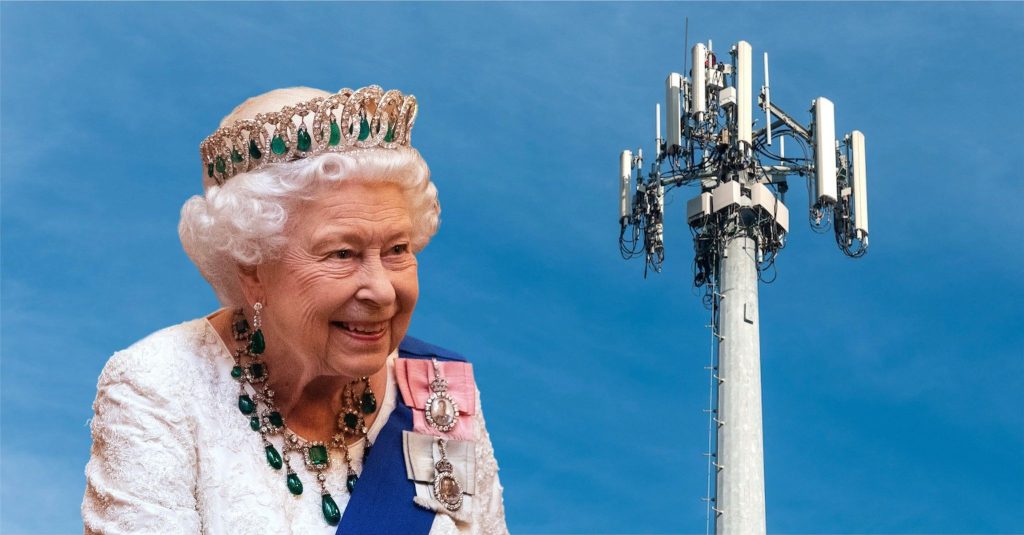 The late British monarch, Queen Elizabeth II, has been dead for a few weeks now. The official autopsy detailing her cause of death has stated that the European Ruler suffered from an overexposure to 5G radio waves.

“She loved using Pancake Swap, a crypto trading network on her phone, and she would hold her phone up higher because she said it would get a better signal, and then one night she realized that if she stood next to the 5G tower on the roof of Buckingham palace, she would get 5 bars.” Said, the newly anointed King Charles.

“Id say, ‘just play Pokemon or something on your gameboy, that doesn’t need wi-fi!’ But she was obsessed with digital currencies and non-tangibles such as NFT’s and stuff like that.” KC continued.

“So anyways, yada, yada, yada, she spends too much time getting zapped from the 5G thing, ipso-facto, I’m the boss now, capiche?” Charles demeanor then changed a little bit.

“Now skedaddle little rugrat, you’re wasting my breath.” The King of England then shoo’d me away with his hand like I was bothering him.

As I walked out he started questioning why he was even talking to me in the first place and how I got in. He swiftly popped up off of his throne and ran after me down the hallway, ending up in front of me, catching his breath, and holding my arms.

“Wait, who are you and how did you get in here?”

King Charles nervously and angrily snapped at me, still clasping one of my wrists.

“I can travel through mass like a ghost and basically teleport to anywhere at any time and people forget what they’re doing and being talking to me honestly.” I enlightened him.

“Oh.” He said, releasing my wrist.

Then King Charles turned around and began oafishly bounding back into his royal quarters, dumbfounded by what had just taken place.

So that’s that, and that’s how the queen died.

Some thought it was Covid.

Some thought it was the vaccine.

Truly a tale as old as time.

That concludes your daily update on the deceased queen in a segment we like to call “Queen Talk.”

This is the first installment of Queen Talk, but you can get used to it happening at least once per day.

Hopefully two times per day once we hire the morning anchor.

She specialized in Queen studies in college so we have high hopes for her.

If she messes up then we’re pretty much screwed, we don’t have any back-up hires, our hiring staff is on strike right now because of a cafeteria fire which we blamed on them and actually deducted their pay for. But that’s neither here nor there.

This has been Queen Talk with Johnny J!

(Also, if you see me in public, call me Johnny J, I want people around to witness that and wonder who I am.)