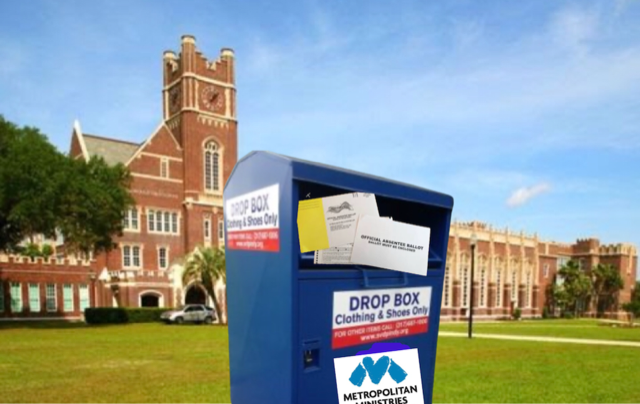 8,000 uncounted ballots were found in the Metropolitan Ministries clothing donation box located in front of Hillsborough High School, and the city is not sure whether or not they’re legally allowed to count them.

“Technically this is not a mailbox or anything associated with the US postal service.” Said Jessica Umpting, head postmaster at the Ashburry Farms Postal Center.

“The people who placed their ballots in the clothing donation box must have been confused, and assumed the large metal box on the corner of their street was an official ballot drop-off.” Umpting explained.

Some voters tried to go back to the box and reclaim their uncounted votes.

“I put my ballot in here because I thought it was a large mail box!” Said Quintin Xurk, one of the unfortunate people who put their ballot in the clothing donation box.

“After I heard on the news that this wasn’t a polling station, I tried to crawl into the box through the top but half of my body got stuck on the outside and I was here screaming for a long time before someone eventually showed up and helped pull me out” Xurk chuckled. “At one point I think a raccoon or something started scratching my butt, I could feel little fingers rifling through my back pockets and poking my butthole.” Xurk recalled.

The probable outcome of the voting fiasco is that the city will end up filling the clothing donating box with hot oil and fry the votes, discounting them, because under the new Amendment 7, the sitting President has the ability to now desecrate mistaken ballot boxes with the use of molten oils, and this would be a good first opportunity to exercise this new right.

Either that, or they will all go to Joe Biden.