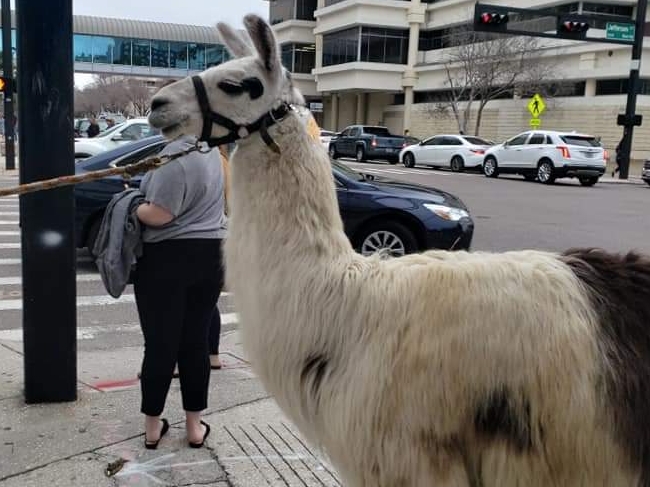 During a successful heist that saw a group of bank robbers escape with nearly $1000 in rolls of quarters, police were temporarily distracted by the appearance of a llama.

“Look at him,” said police officer Karen Menazquez. “We get caught up in the daily grind of stopping criminals that sometimes we don’t get a chance to appreciate how great this city is.”

Residents agree that the llama walking through Downtown Tampa was the first thing to bring the city together since the last time the Rays almost made it to the World Series.

“Everything that happens in this city feels like an experiment to piss half of us off,” said Downtown Tampa resident Pam Dzoq. “I used to hate this city, but then I saw that llama and it made me not racist anymore.”

When told there was a deadly bank robbery while the llama was being paraded around by an accomplice, Dzoq brushed it off.

“Liberals love playing the victim card,” she said while letting her dog poop on the sidewalk and then walking away without cleaning it up.

Everyone employed at the Wachovia bank in Downtown Tampa was held hostage for many hours. Doug Snipple was the only survivor.

“They brought in tons of guns which we later found out were 3D printed and broke after a few shots,” said Sniple. “The robbers demanded quarters for something called a Quarter-drop machine game thing?”

Sniple got sad and began to cry.

“We tried to give them cash but then they wanted to exchange it for more quarters,”

They executed all of his co-workers in front of him while demanding more quarters. “I hit our banks panic button like a thousand times but the cops never showed up.”

When told that the cops were distracted by a llama, Sniple got angry.

“I’m going to kill that llama,” he said before heading to the banks 3D printer were he began to print a gun. “In a couple of hours, I’m going to have the necessary equipment to carry out my revenge.”

I tried to tell him that the llama was gone but this only made Sniple angrier.

“He’s not gone…yet,” he said while laughing maniacally.