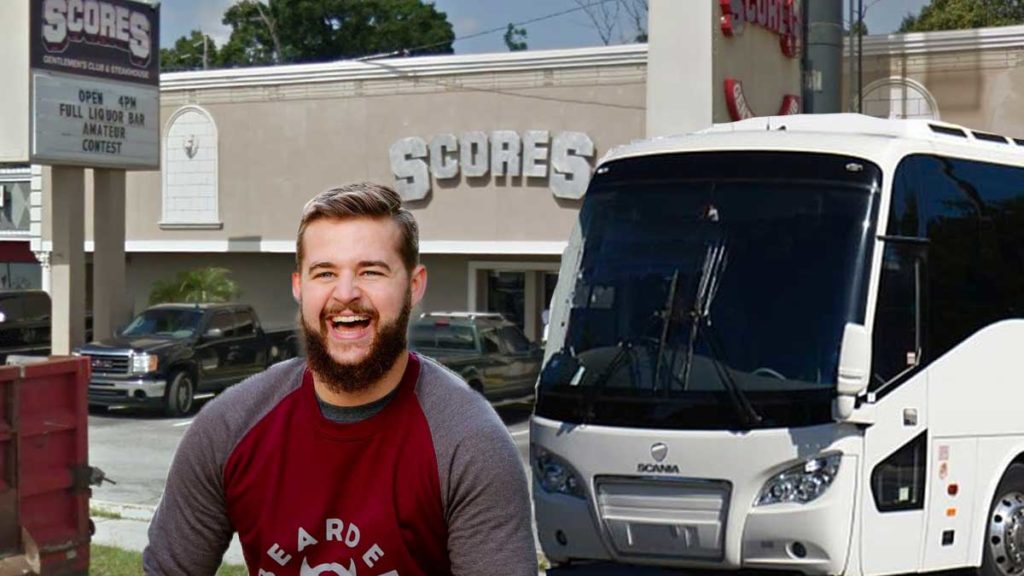 “I’ve been on all types of booze-oriented vehicles,” said Erotiques while showing me around his prototype double decker bus that he spray-painted with the words ‘Tit-Mobile’ in huge unreadable letters on all sides.  “Brew Bus, the Cross-Bay Ferry, the Ybor-Downtown trolley, those group pedal-powered bar bike things, they were all great, but I barely ever got to see boobs.”

Through a partnership that he has yet to forge with Tampa Bay-area strip clubs, he hopes his “Brew Bus” for strip clubs idea will get him out of the deep financial hole he got himself into when he accidentally purchased a fleet of double-decker buses.

“I really need this to work out because I want to see some titties and make some money doing it,” Erotiques said while talking at me in an uncomfortable corner of the bus.  “I’m really tired of paying to see titties, it’s nearly impossible because I’m still paying off this bus, plus four others.”

I tried to remind him that I was trying to help promote his idea through my journalism and maybe saying things like that will make people not want to ride his bus.

“Oh your journalism has already helped me,” he said with a big smile, “I know some sick people really like reading your stuff and I want in on it.”

Erotiques excused himself to the bathroom, which was a section at the back of the bus that he had curtained off where the seats were removed and replaced with buckets super glued to the ground.

I didn’t hear him pee or poop, but I did hear a lot of hard sniffing noises.

I felt uncomfortable and decided to stand outside the bus.

“Where are you going!” I heard Erotiques yell.  “I’m not done with my interview.”

I yelled back that I had enough information to go back to the office and write my story.

After a brief moment of silence, I decided to start heading back to my car.  Suddenly, I heard the engine of the bus come alive, followed by the blasting of that Mötley Crüe song “Kickstart my Heart”.

Next thing I knew the bus was driving full speed towards me.

I dove out of the way at the last moment, the bus barely missing me.  Erotiques then drifted the bus 180 degrees in the parking lot we were in, headlights staring at me, engine revving.

It was a Mexican stand-off.

I looked towards my car and attempted to make a run for it.  Erotiques slammed on the gas and came at me at full speed.  By the time I opened my car door, he rammed the hood of it, pushing my silver two door Chevy Cavalier far away and leaving me holding the door handle.

He then drifted the bus 180 degrees again. I wasn’t left with many options so I decided to stand my ground.

“Did I mention my bus will only operate from 11 PM to 7 AM?” Erotiques said to himself.

I didn’t hear him say that last part as I was trying to figure out a way to survive this situation.

He then started barreling full speed towards me.

I stood still and meditated for a moment, as the bus got closer I braced myself.

“You’re going to really like my bus ride,” Erotiques laughed to himself.

At the last possible moment, I jumped and the full speed impact of the bus coming at me allowed me to bust through the front windshield. I flipped and rolled to a safe landing inside the bus.

“Oh no!” Erotiques yelled as he tried to slow down, but as he was occupied trying to stop the bus, I ran up and snapped his neck.  I also turned off the obnoxiously loud Mötley Crüe song that was still blasting through the speakers.

The “Brew Bus” for strip clubs hopes to get started soon, right now they will only shuffle people between Scores, 2001 Odyssey, and Mons Venus.  A separate strip club bus service is also technically operating currently as the 36 and 45 HART buses.