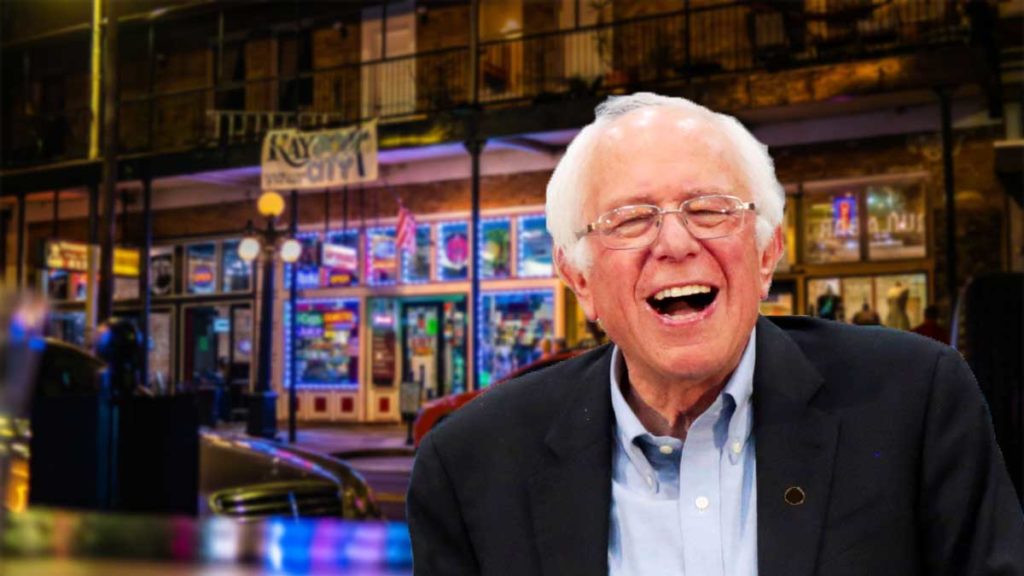 While partying with some Antifa members in Ybor City, Vermont Senator Bernie Sanders had a little too much to drink and blacked out.

“I was discussing my policies with some of the young Americans who spend their time in Ybor City,” said Sanders who was nursing his hangover with a little hair of the dog. “I don’t ever like to mix beer and liquor, but whenever someone offers me a free shot I have to take it.”

Sanders claims he was sipping PBR all night because he knows how many he can handle, but when Antifa member Muggins Porchlinks said it was his birthday, friends started coming up to the table with rounds of shots for everybody.

“We know the bar owner and he doesn’t mind that we brought our own bottle of grain alcohol,” said Porchlinks. “We thought the old man could handle it, being a socialist and all. We wanted him to prove he was one of us.”

The Tampa chapter of Antifa has been recruiting new members by offering strangers free shots of grain alcohol.

“Have you ever tasted this stuff,” Porchlinks said to me while pouring me a tall glass grain alcohol. “I once spit it into a bonfire and the flame grew so big my hair got caught and I had to get taken to the hospital.”

Porchlinks removed his wig to show me the burn scars on his head.

“Ever since that day, I promised myself I would never let my money reach the 1%,” said Porchlinks after chugging half the bottle of grain alcohol to himself. “I make this stuff in a toilet behind my parents house, I live off the food I find in the trash and I sleep half the year in the backyard of this snowbird couple who lives next door to my grandma’s place.”

Porchlinks hopes that under a Sanders presidency, the country will give him a chance to make money doing what he does best.

“I want to open my own Trumpy Bear manufacturing plant,” said Porchlinks. “I think they are cute.