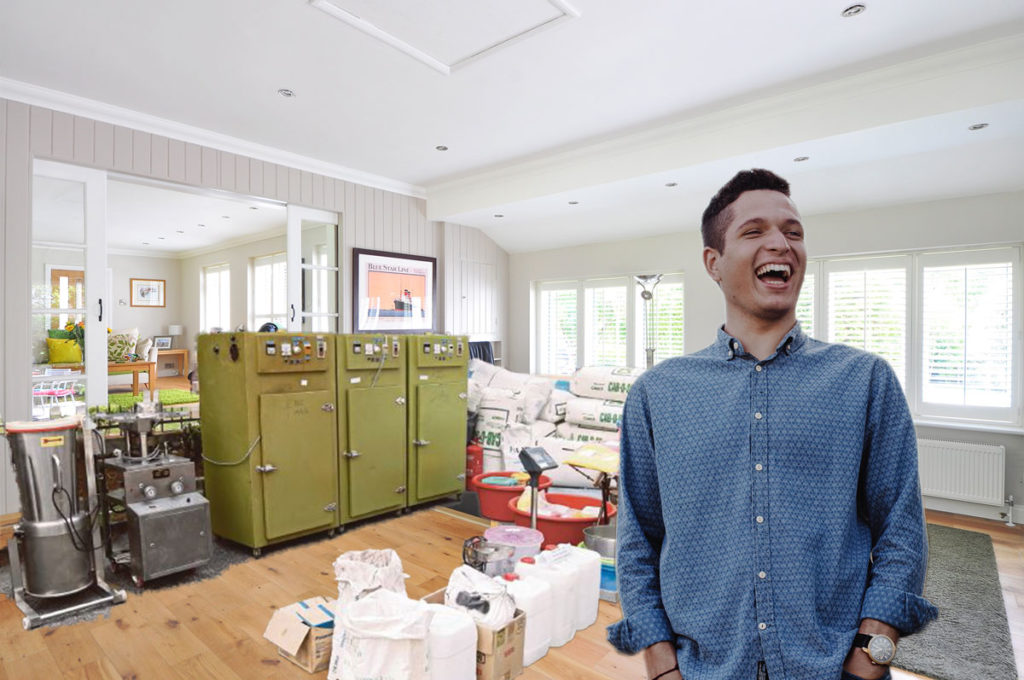 “Yeah, that’s what’s happening,” said the projects director, a man who preferred to be referred to simply as “Spider.”

“How did you find out we were shooting this?” Says Spider. I start to notice there’s no cameras in the room and it’s only the drug paraphernalia. “I uh,” I trip backwards over an end table, shattering glass everywhere.

“Whoa there buddy, take it easy!” Spider says, running to my aid. “Are you ok? These aren’t real drug fumes!” He laughs. The rest of the “crew” laughs too.“We’re definitely filming a ‘Broken Bad’ reboot film, like you said” Spider says.

The crew stops laughing. “So like I said, how did you find about our ‘shoot.’” Spider says as he air-quotes.

“Well,” I say, as I get comfortable in a padded chair. “I was walking down the block, and I saw a door was cracked open,” I take a lick of a big lollipop, “and I thought, ‘maybe my friend Tim is in there!’ So I ran up to see if Tim was here, and I noticed you guys were shooting this reboot of ‘Breaking Bad’ so I figured, ‘why not bust out the notepad and get to some journalism!’ Kill 2 birds with one, you get it.”

Spider looks down and disappointedly shakes his head with a sad laugh as he unpeels a popsicle. “I really wish I didn’t have to do this.” He begins pacing, his crew looks nervous, they begin eyeing each other. “I DON’T WANT TO DO THIS!” Spider throws a glass ash tray at the ground and it explodes, he charges at me, but his crew jumps into action and intercepts him. “Get out of here John!” One of Spiders former henchmen says. “We like Tampa News Force! We like the things you’re doing and I’m not just saying that because we know you want validation! We mean it! For real!” He smiles at me and I like it.

I sprint out of the house, but I realize I’ve left my notepad back inside Spider’s metaphorical web of lies, AKA the drug den I just narrowly escaped from, also known as the room TIM WASN’T IN, AND I HATE THAT I HAVE TO REMIND YOU GUYS THAT, I’M JUST AS DISAPPOINTED AS YOU GUYS ARE, IF NOT WORSE.

So anyways, I run back into Spidey’s crack cabin double-decker duplex mad-house, the crew’s actually pretty relaxed now, Spider looks like he’s calmed down, he’s popped open a Corona and kicked back on the couch with his friends and everything seems fine. He sees me and tenses up in a quick seize. He locks eyes with me. Then turns his head like dogs do when they don’t understand what you’re saying. Then he says to me, “Wow. Are you insane?”

I slowly try to inch closer to my notepad while simultaneously keeping my cool. “What? Haha me?” I get within arms reach of my notepad. “I’m not crazy! I just wanted to make amends! Say sorry for you know, putting you in a position where you believed you needed to end my life for the sake of maintaining your anonymity.” I grab my notepad.

“HE’S GOT THE NOTEBOOK!” Spider screams.

This time the henchmen aren’t on my side. “Why didn’t you just quit while you were ahead?” The newly, once-again former, henchmen of Spider says. “You could have probably just gotten out of here and written your fake story from memory” The henchmen says as he begins hogtying me.

“I don’t know.” I say. They begin putting shackles around my neck and stringing me up by my limbs. “I guess it’s just,” I pause.

Right as they’re about to pull me up into my what-will-surely-be final position shackled to death hanging from the ceiling, Spider shouts, “Stop!” They stop. “Just what?” He says.

“Well… It’s just… I never know how to end my articles. I never know when to end the joke you know? Everyone’s laughing, everyone’s having fun at the initial comedic concept, but then I just keep pushing until it’s not funny anymore, and in fact, some people find it offensive and off-putting, and my existence just seems like a burden on them and it makes me sad and question whether or not I’m doing something wrong.” Blood begins dripping from my nipples. “It’s just… I don’t… I don’t know, I just… I don’t feel like a ‘real’ journalist you know? Or a ‘real’ comedian even. I’ve been doing it what, 11 years technically if you count the first two, but nobody’s really that consistent those first couple years unless you’re older and you’re trying to make up ground for the time you lost, so you need to go to every single open mic because you feel like you’re already behind you know?”

Nobody seems to know what to make of anything I just said. I slowly get lowered down to the ground from the now very high place they had pulled me up to during the long, run-on monologue I gave in my time of dire straits.

“Just get out of here,” Spider says. “I can see that your intentions are pure, and even though nobody’s going to read this far into the article, you’re still doing it, and that shows you’ve got balls.” He does the ‘balls’ motion. “I’m going to let you live… But only because I want to see how far you can go.”

“Thank you Mr. Spider!” I say gratefully as I try to scamper away pathetically.

“One last thing.” Spider says. “Were you on the first season of ‘Are You The One?’”

“I thought I knew you somehow!” Spider says. “I can’t believe I almost killed the kid from that show!” The whole crew erupts in laughter. “Wow,” Spider says. “That was a close one!” He sighs with joyful relief. “And you know what? I think you’re kind-of funny.” He says.

“Thanks.” I say. Then we smoke meth and have gay sex.