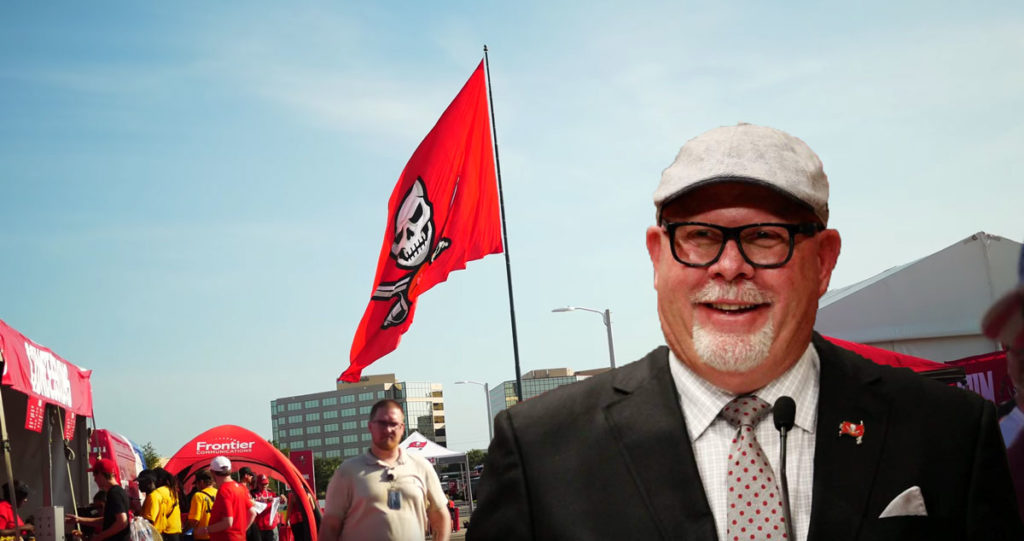 Tampa Bay Buccaneers head coach Bruce Arians has quit his coaching position suddenly amongst frustrations citing, “Lack of comprehension from the team on every level,” and “General unhappiness and anger.”

“These boys don’t want to play!” Shouted Arians from the back of a golf cart. “I draw plays, they play Nintendo Switch and start doing Fortnite dances!” The golf cart sped up faster and hit a speed bump, jostling Arians, causing his safari hat to fall off.

“I can’t work at a place that doesn’t have locks on the doors! None of the rooms in that One building have locks on them!” He started shouting louder as the golf cart sped up and zig-zagged in and out of palm trees which had grown from the cracks in the pavement.

A T-rex emerged from the brush and tried to bite at the golf cart. It made Arians’ hat seem much more appropriate. James Winston jumped out of an SUV that was passing by and threw a flaming football at the dinosaurs mouth. The dinosaur choked on it, but didn’t die, instead it coughed it up and safely walked away in shame, causing Arians and his driver to be safe.

The press that gathered to interview Arians during his emergency press conference began clapping. Arians smiled and laughed while shaking his head and looking down.

The crowd applause grew louder and Arians shouted, “Ok, fine, I’ll stay!” And the audience went wild! People ran up to Arians and hoisted him on their shoulders and shouted, “Bruce! Bruce! Bruce!” He giggled proudly and squealed with joy!

All of a sudden, the starting players for the Bucs were all silently standing shoulder to shoulder, blocking the parade that had bursted among the Bruce supporters.

“Not so fast.” One of the biggest Bucs’ stated. A hush fell over the crowd.

“What is it, ‘Bucko?’” Arians mockingly asked, getting down from the shoulders of the excited citizens and lighting his cigar right in the Buc’s face.

“You didn’t say anything when we were on the field.” Arians said. “You think you’re going to be tough now? In front of all these people?” Arians motioned to all the people.

“Yea I’ve got something to say,” said another Buc at the end of the line, who previously hadn’t spoken. Arians mosied down to the other Buc. “Oh yeah? Then what is it?” Arians taunted.

Then all the Buccaneers started singing and kicking like the Rockettes. It was a very complicated number with numerous props, outfit changes, and physical cues that must have taken months, even years, to work on.

Bruce gasped for air in utter awe. He tried to speak but couldn’t get the words out, he raised his arms over his head, incapable of speaking.

“You guys!” He screamed. “You read my dance diary and choreographed my dream number!” The Bucs nodded their heads. “That’s amazing!” Bruce laughed while tears streamed down his face. “I don’t care about the football stuff! I just wanted to dance my whole life and coaching football on a professional level was the closest I ever got!”

“Also coach,” one of the smallest Bucs blurted out, “Also, you haven’t even coached one game with us yet, so why would you quit?”

Another hush fell over the very confused still attentive crowd. Bruce Arians sprinted right up to the Buc’s face and said, “You know what!”

The crowd held their breath in suspense. You could hear a pin drop.

“You know what!” He said, “…You’ve got a point there!” Then Bruce laughed and the whole crowd laughed. “I’m going to work here for 100 years!”

Then Bruce’s eyes rotated to reveal robot eyes, Bruce is a robot that says, “Made by the NFL” on the back, and he then did a long song and dance number about he himself being an indestructible football coaching robot who only ever wanted to sing and dance but was programed to do other things. It was very inspirational and everyone enjoyed it a lot. Then he decided he won’t be quitting. So the main point of the story is he’s not quitting.