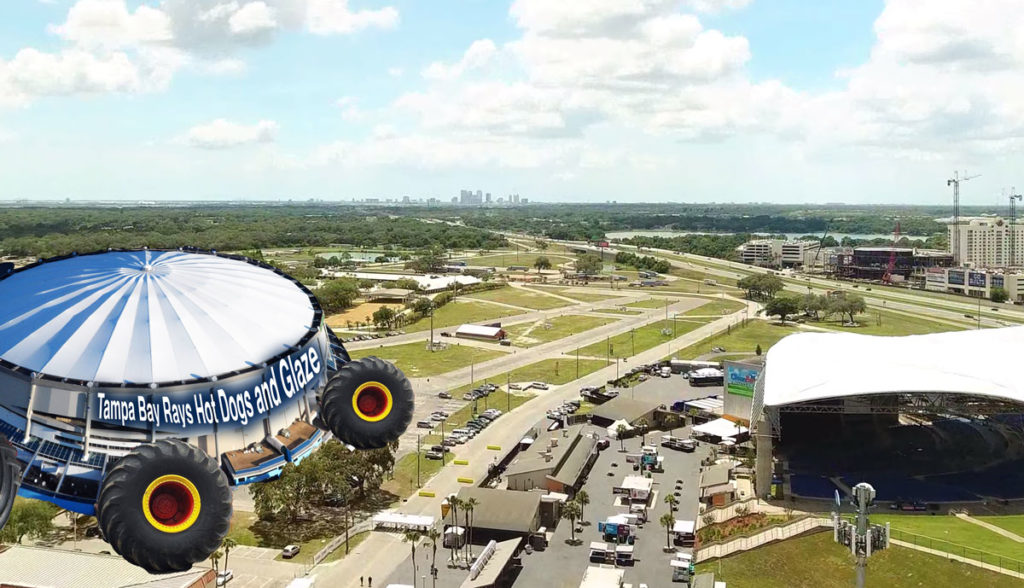 In an attempt to get more people to attend games, the Tampa Bay Rays have officially announced that they have secretly converted Tropicana Field into a food truck and will soon begin touring the state of Florida.

“I was watching that movie Mortal Engines with my kid and I thought, that’s pretty cool,” said Tampa Bay Rays owner Stu Sternberg after answering one question from the press and immediately ending the press conference.

Crews have been hard at work for the past two weeks preparing Tropicana Field’s transformation into ‘Tampa Bay Rays’ Hot Dogs and Glaze’ a 1.1 million square foot moving structure that serves food and baseball.

“I’ve never driven any food truck like this,” said the new Rays Food Truck Captain, General Elvis Shakur, “But that’s not going to stop me from parking it wherever I want.”

Shakur laughed maniacally as he steered the massive food truck towards the Florida State Fairgrounds. “I’m only parking it there because I want to hang out at the casino.”

The Rays hope that the new food truck design of Tropicana Field will entice millennials to follow them on social media and attend more games.

“We definitely want more teens to come in here to take pictures of the hot dogs and glaze,” said new Director of Food Services for the Rays, Prince Jackson. “The glaze is a special recipe that I’ve been working on. It’s a vegan mixture of root powders and non-animal tested gelatin substitute. I make it fresh daily.”

Jackson had me taste test the glaze, but someone hit a home run when he was about to see me lick the spoon, and when he looked away I threw the spoon at a nearby trashcan while pretending it was really good in an exaggerated way. Jackson gave me a whole tub of glaze to take home, noting that it works great as a conditioner as well as a meal substitute.

A full schedule of stops for the new moving stadium can be found on the Rays Instagram page.