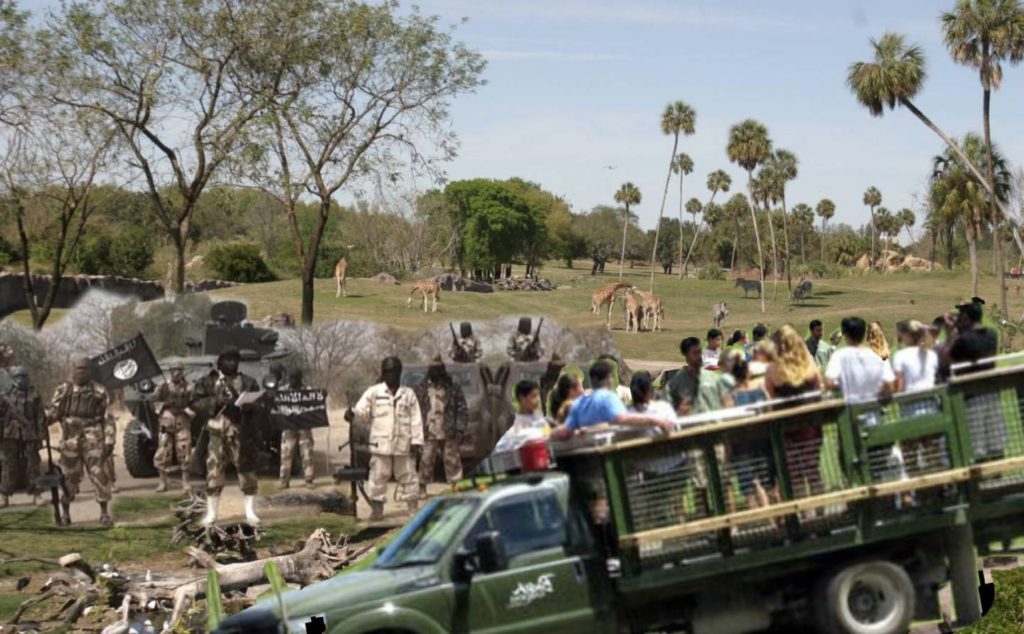 Busch Gardens has installed a new section of it’s safari attraction which will include modern African culture to make the experience feel more authentic and exciting.

Instead of only the animals you’d find roaming the Great Plains, you will now be driven through a war-torn Sierra Leone and encounter child soldiers which will simulate an armed robbery on the excursion.

Patrons will now have their pictures taken at the peak of their fear as the children hold them up at bayonet point, which will be available for purchase in portrait or keychain size.

At the end of the ride, park-goers will also have the ability to donate directly to the militia fighting these wars in Africa, as part of the parks “socially conscious” initiative.

“It’s like so cute.” Says Patrisha Bernstein, standing 5’2 with 8-inch bedazzled heels. “I’ve been trying to be like, more ‘woke’ and stuff ever since my boyfriend made me watch that Netflix movie, and to like, see this kind of thing bringing awareness to the nation, I mean it’s just like totally inspiring.” She leans down to let her poodle sip Mountain Dew: Code Red through a twirly straw.

All proceeds will go towards the End Blood Diamond Mining Federation benefitting the directors of the movie “Hotel Rwanda.”

We caught up with one of the child actors playing a kidnapped insurgent. “It’s fun scaring white people” he giggled. “Usually my agency has me play extras in toilet-paper commercials, or the son of a loving family, but this role, I don’t get tired of playing!” He then raised his prop gun into the air with joy. “The only part I don’t like is watching all the people at the end of the ride take selfies as they donate to charity. It’s like, just do something nice for once without projecting it into the world! If you’re really a good person just do something nice and move on, don’t take a picture to look cool or something.” He shrugs then slams the gun butt of his prop AK-47 onto the ground. “Oh well, that’s the grind! I gotta get back to scaring these white people!” The boy skipped off to his post.

It’s recommended if you have a heart-condition or are pregnant, to not enjoy the new safari excursion due to it’s exciting nature. However it’s not prohibited, so the park will still honor all guests willing to participate. Local Standup, Podcaster, and Nutritionist – Listen to “How to Die Alone.”