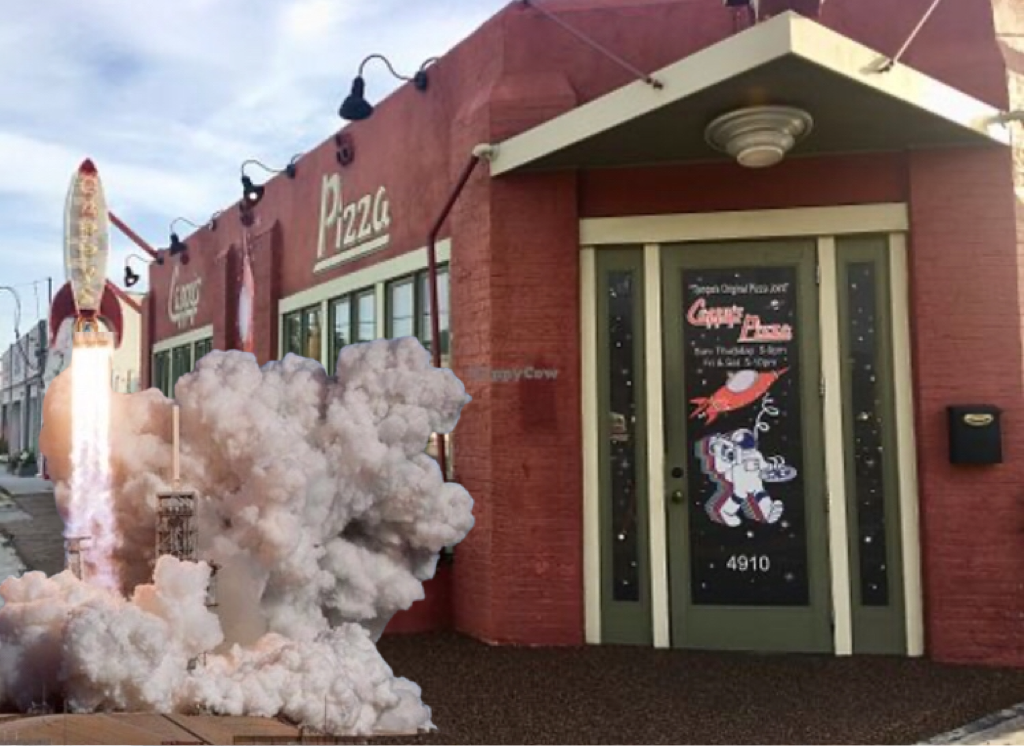 The famous Cappy’s Pizza rocket ship sign randomly blasted off into space yesterday in what some are calling “an unexplainable phenomenon.”

It was around 3:16 PM, Hector and Natalie Ramirez were driving their work down Florida Ave, when they noticed the Cappy’s rocket ship sign begin to shake.

“It started shaking, then real fire started shooting out of the exhaust and it broke free from the steel things holding it and it shot up into outer space.” Mr. Ramirez explained.

The staff at Cappy’s can’t explain what took place, however they have their theories.

“I believe a rat outside had been dragging greasy leftover pepperonis from the dumpster out back up to the base of the sign because it was living inside, feeding it’s rat babies. Then, I remember one day we threw out some pizza ingredients and there were a bunch of busted fireworks in the dumpster, I think the ingredients got mixed with gun powder, and the sun heated up the metal sign and the base of oily cheese mixed with the newly brought gun powder was the perfect concoction of chemicals to create an other-worldly blast off.” Said Nick Bertucci, pizza-maker In training at the Bay to Bay Cappy’s location, however he was transferred from the Florida location where he noticed the rat habits.

There’s no plan for a further investigation as no one wants to spend any money on digging any deeper.

“It’s just not worth it for any of us.” Said Winfield Magueington, City Commissioner for the Seminole Heights, Florida Ave District.

“We don’t have the time or money to look into any unauthorized blast offs right now, we still have millions of dollars tied up in a swamp monster case which has us in a deep hole which we’re not sure we can get out of, we may have to file for bankruptcy.” Magueington said.

The lack of rocket shit sign will not impact the business in any way, and all locations are still open and serving.