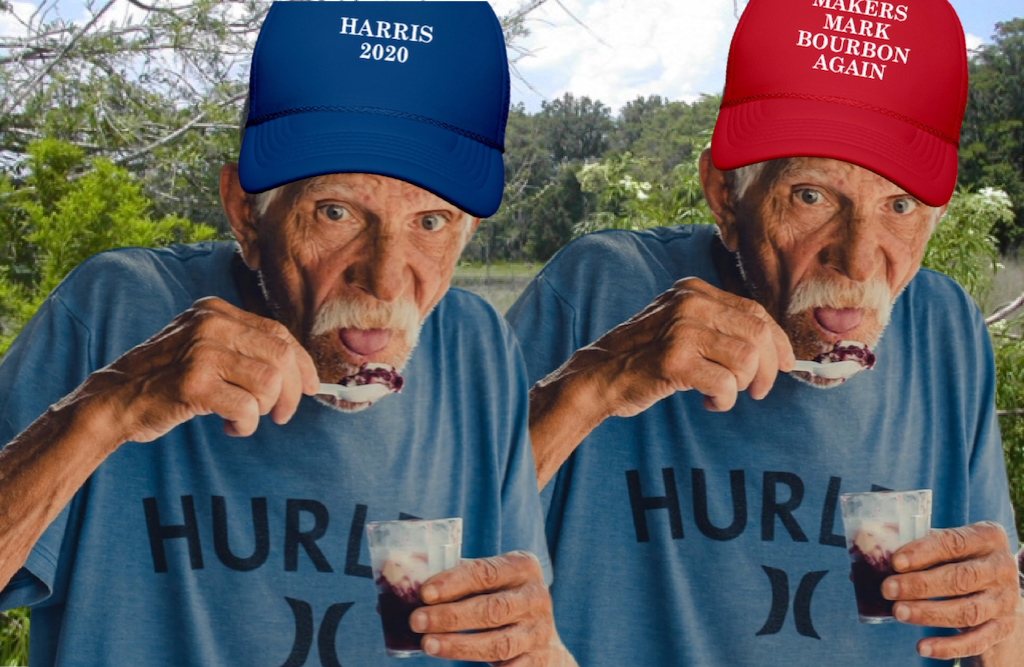 This morning he left early to enjoy nature, peace and quiet. He was only going for an hour so the only supplies he needed were a water bottle and two hats for sun protection.

Wilbur said “I always bring two hats in case you lose one. You must respect the powerful Sun rays in Florida”

Wilbur had received both hats as gifts. The first hat was given to him by his friend Willie Harris.  Harris  recently had an eye exam. He was very happy he still amazingly had 2020 vision. He made blue hats that said ‘Harris 2020’ on them. He gave one to Wilbur.

The second hat was given to him by his wife Alicia Harrington.  She knew his favorite type of bourbon is Makers Mark bourbon. She gave Wilbur a red hat that said ‘Makers Mark Bourbon Again’ on it.

Harrington launched his kayak and headed straight to the center of the lake. He reflexively grabbed the blue hat and put it on. He was approached by a fishing boat on his right. They were drinking beer and seemed friendly at first.  When they spotted his blue hat they became angry and started insulting him. Eventually they grabbed his kayak pulled off his blue hat and threw it in the lake. Wilbur paddled as hard as he could to the left.

On the left side of the lake Wilbur was approached by another fishing boat. They were smoking pot and seemed very friendly at first. They were there to protect Wilbur. Wilbur put on his red hat for sun protection. When the people in this boat saw Wilbur’s red hat they became enraged. They became condescending and were hurling insults at Wilbur.

They grabbed Wilbur’s kayak pulled off his red hat and threw it in the lake.

Wilbur paddled as hard as he could to the center of the lake. Both fishing boats were surrounding him. They were both still angry about hats. A struggle over Wilbur’s paddle followed. Eventually the beer drinkers and pot smokers pulled his paddle so hard it was broken in two. Each side destroyed half of Wilbur’s paddle.

Wilbur was frightened and decided he wanted to reason with both sides. He discovered they each watched different cable news channels and were outraged about what they had heard this morning. They heard an editorialist pretending to be a news person describe an outrageous event. Each side heard a different take on the same story.

Both sides  were adamant they were correct. There were four people in each boat and decided to put it to a vote. It was even and they decided Wilbur would be the deciding vote. Wilbur was contemplative because he doesn’t watch cable news. Wilbur said he needed to think about it.

After this response both boats were incensed. They splashed Wilbur mercilessly, insulted his family and called him names.

Miraculously the two boats agreed that Wilbur was the true idiot here. The boats tied off together and started drinking beer and smoking weed as one. As they departed together they mocked Wilbur and had a big laugh about his hats.

Wilbur is still stranded in the middle of Alligator Lake without a paddle. He is hatless and has a terrible sunburn on the bald spot of his head. He is hoping for a quick rescue so he can be educated more from cable TV news.