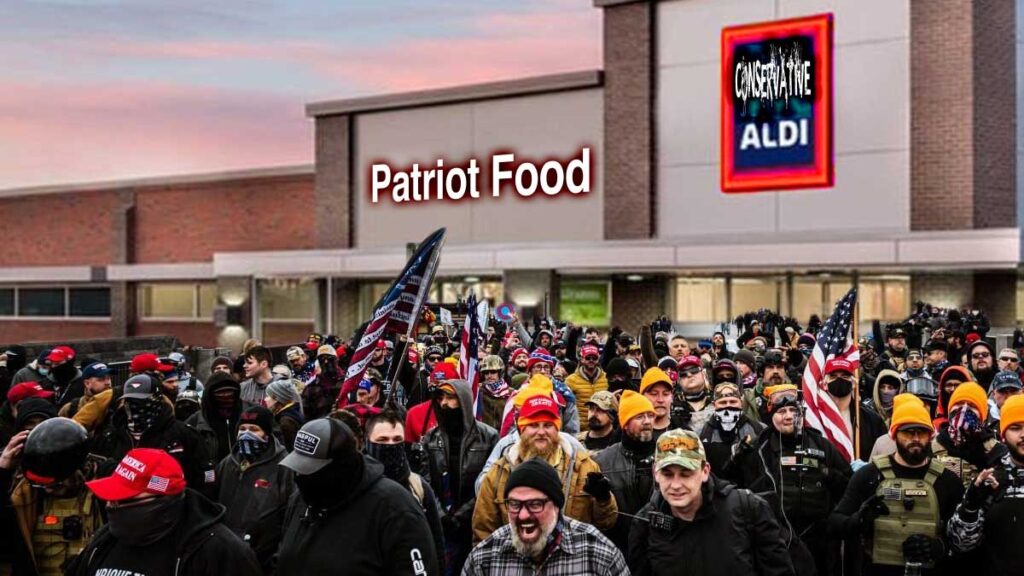 A new Trump-themed Aldi supermarket is opening along US-19 in Largo, FL.

“We pretty much took Aldi’s concept and made it for Patriots only,” said supermarket founder, Chaz Rocket. “I’m also happy to announce that we will be open in time for Trumparilla baby!”

Rocket then took out a t-shirt cannon and blasted a shirt to the sparsely attended press event that was being held in the parking lot.

At Conservative Aldi, shoppers enter through a side door that they have to manually open. Once inside, they are given an electronic cart that sits up to four people, with storage bins in the front and back.

The interior of the store looks like a weird carnival bumper car ride in a large warehouse with isles. Signs hanging from the rafters read, “100% meat, none of that artificial shit!” and, “If it’s vegan, we ain’t eaten.”

Guest are encouraged to speed around the isles, knock things off the shelves into their carts, and to flip the employee’s off.

“They can handle it. We pay them $8.56 an hour until they force us to increase it to $10 on September 30, 2021.” Said Rocket as we zipped past some employees who were frantically restocking shelves and picking stuff up off the floor that was knocked down by the customers.

There is no fresh produce section, most items are either Goya or knock-off variations of popular brands but with a conservative twist like “Aunt Jemima” and “Uncle Ben’s”.

Once guest want to check out, they simply drive their cart through a large exit scanner that looks similar to the ones used at the airport security check-in.

Guests park their carts in the center of the scanner and every single product is scanned all at once in a single spin of the scanner.

“We were told that the radiation levels of the scanner are within safe limits,” continued Rocket, who was wrapping up the tour.

A 30-foot tall cardboard cut-out of President Trump stands at the exit, which is modeled after the outside of the White House.  Customers are allowed to hang out in the bagging area, which sports a community microwave and children’s play area.

“Roger Stone says he is going to send his personal shoppers here to gather goods for the apocalypse.” Said Rocket, who was starting to scare me a little.  “We hope you come back and join us for Trumparilla, everything will be half-off if you wear your MAGA hat.”

Conservative Aldi is currently open to the public, but given the name, it is safe to assume that it is only open to their like-minded public.