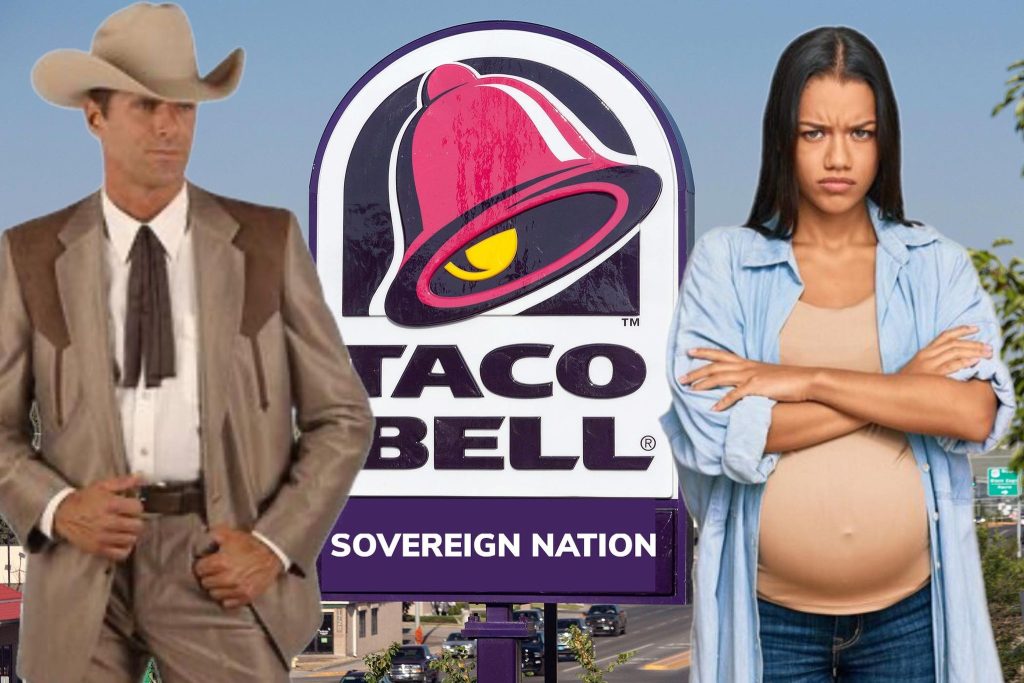 If you frequent Taco Bell you may be deemed legally, Doritos Locos, after the franchise has declared all 7,235 of its locations as sovereign nations with their own sets of laws and regulations.

Sparked by citizens rising want for abortions, Taco Bell realized that if it operated as its own country, it would be able to legally perform abortions on customers, as well as allowing them to smoke crack or gamble.

“It was a no brainer.” Said Chef Vick Turpentine, CEO of Taco Tank, the parent company of Taco Bell.

“T-Bell is just one of our many franchises, I could give a s**t what happens to them.” Turpentine said brashly, rubbing the underside of his white velour cowboy hat, revealing his tan-lined forehead.

“Taco Tank is the parent company of Taco Bell, Chicken Hut, Dynamite Alley Bowling Company, Rash Quest Apartment Complexes, both north and south. I have more money than I can shake my c**k at.” Turpentine bragged, weirdly and unabashedly sexually.

“I’m a freedom lover and a freedom fighter, and also a freedom stealer.” Turpentine snapped.

“I give to myself, I take from others. I give to others. I take from everyone. I don’t keep track anymore, everything’s going which way, zip, zap, zam.” Turpentine shot his hands across his chest in numerous directions to convey his confusion with whatever it was he was trying to explain.

“Oops-a-daisy!” I said quietly, and laughed to myself as Turpentine writhed in pain.

“Sucks to suck!” I continued piling on silently, humoring myself, refusing to call for help.

Turpentine pulled a taser from his belt and electrocuted himself in the sternum, jumping to his feet.

“You didn’t help me you little s**t f**k!” He shoved his finger in my face, as his words carried spit on to me.

“Yea, I did! I was texting the EMTs!” I showed him a screenshot of a fake text I keep handy, incase anyone accuses me of not trying to help them.

It subdued Turpentine and he grumbled to himself. “Millennials” He said, holstering his taser.

“Anyways, like I was saying, I could kill you with my bare hands, or I could hire someone to kill you and nobody would care or do anything about it. That’s the kind of autonomy I have.” Turpentine stuck his thumb into his chest proudly like the ruler of a Byzantine empire.

“So you do abortions at Taco Bells now?” I tried to get the interview back on track.

“Don’t ask me any f**king questions!” Turpentine stopped walking and shot me a murderous look.

“I speak, you listen, that’s how this goes. You don’t say s**t!” Turpentine scolded me.

“You’re lucky I don’t squish you like a bug, I take bigger s**ts than you every night-“ But before Turpentine could finish cursing me, he was hit by a public bus after stumbling into the street.

His body exploded into trillions of blood particles, almost as fine as a pink mist, covering everything within a 30-foot radius. Ironically, the bus had a giant advertisement for Taco Bell’s “Abortus Locos.”

I had grown tired of being berated anyway, so this occurrence didn’t effect me too harshly.

I started walking back to the office when I found a magic genie lamp on the side of the road.

I rubbed it, and a genie came out.

I said, “Would you bring back Vick Turpentine, the CEO of Taco Bell?”

I said, “Yea. Yea, he was, but you know, I need to finish my interview or I’ll probably get in trouble at work.”

The genie snapped his fingers, and there in the flesh was Vick Turpentine, new white cowboy hat and everything.

Vick stared at me for quick second then punched me dead in the nose. I started bleeding.

“What the flying f**k you stupid millennial, you let me get killed!” Turpentine screamed.

“Yea, but then I wished you back to life!” I pleaded angrily.

“Yea, I guess you did.” Turpentine let out a big belly laugh.

“You stupid f**k, you should have just let me die! You could have easily stolen my fortune from me. I keep millions in cash, around everything I own! You idiot!” Turpentine laughed at my humanity.

Then another bus hit Turpentine as he was hunched over laughing in the street, exploding him into, once again, trillions of tiny blood particles.

I ran back down the road to the genie lamp.

The genie came out.

“And let me guess, you want me to bring him back to life again?” The genie guessed.

“Actually, wait… No.” I changed my mind.

The genie was surprised.

“Won’t you get in trouble at work?” The genie prodded.

“So what do you wish for instead?” The genie wondered.

“I wish for this story to end.”