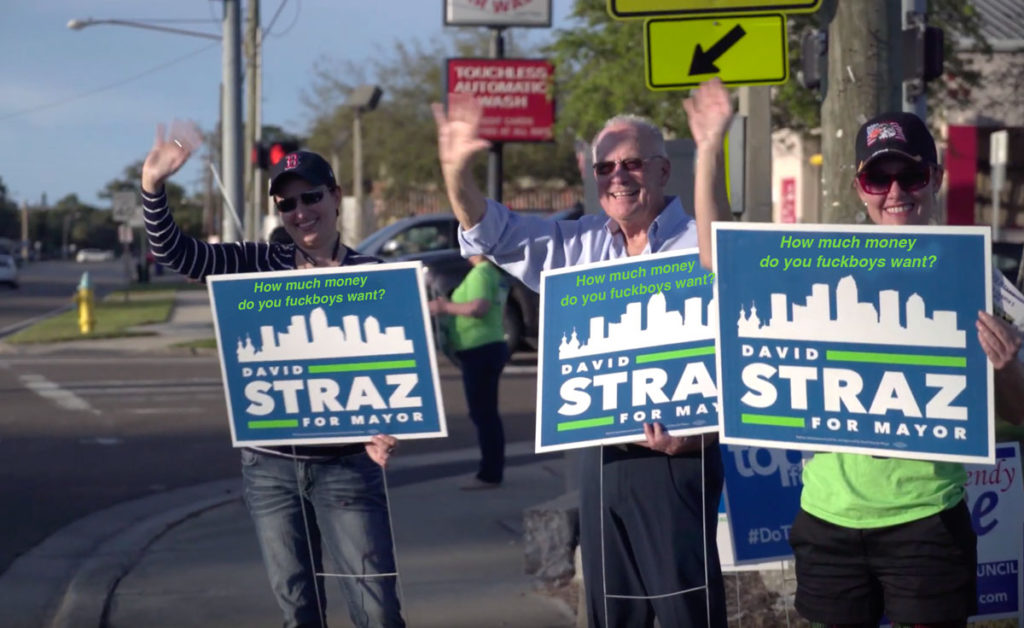 While the Tampa mayoral runoff is still weeks away, candidate David Straz has received some swift criticism for a small error that led to accidentally changing the slogan to his campaign.

“We don’t know who changed it, or why it said that when we printed it,” says campaign staffer Eminireal Hutchenson. “We went to pick up the prints and that’s just what it said under the slogan.” Hutchenson showed us the sign while standing in front of a pallet of boxes of yard signs containing the erroneously printed slogan.

“The printer guys assured us it was good, but I’m too scared to ask them to reprint it again because I had to wait and watch the whole time as they printed the first batch because I had got there early.”

Hutchenson sped up her talking and gave off a having a panic attack vibe, so I began doing a series of slow hand gestures and whispered encouraging things to calm her down.

“This isn’t some funny joke, I have to cover up all of these signs and make them say the imagine thing again for minimum wage,” she began sobbing uncontrollably. “Do you know how much minimum wage is right now?”

While I never did find out how much minimum wage was or who would have changed the wording on the slogan, Straz assures supporters that he is still going to spend a lot of his own money to win this race.

“Whatever you do, don’t get anything printed by the UPS,” said Straz at a rare public meeting he held in front of a paid group of supporters. “They are great for shipping, but what an awful experience that was getting these yard signs made.”

Straz held up the yard sign with the wrong slogan on it and began shouting, “This is wrong, this isn’t funny and whoever did this as some funny joke, stand up and show yourself! I paid good money for this to say ‘Just Imagine!’ not ‘How much money do you fuckboys want?’ I’ve never said the word ‘fuckboys’ in my life, and if you think I’m going to start saying it now, well then you are mistaken!”

An assistant ran up on the stage to aid Straz, but he shoved them into the front fully-catered table, slinging food across the ballroom of paid supporters, striking some in attendance with broccoli and other side dishes.

Straz then continued his speech while onlookers tended to the assistant who was now lying face down in a pool of gravy:

“You know what’s good for Tampa, ME! Not some woman with experience! When was the last time Jane Castor paid a cast of people to sing and dance for her while wearing elaborate costumes? She hasn’t, she’s probably only seen that sort of money in evidence locker rooms. Me, I wake up every day and I see that money. I know exactly how much money I have and it is definitely enough to pay people, and that’s what this city was based on, paying people! I’ve given millions of dollars for labor. Imagine what would happen if I was in Downtown Tampa, every day, in City Hall. Me a person with tremendous wealth just walking around shaking hands. Isn’t that what this city deserves? I think the people of Tampa deserve a millionaire who has absolutely no outside interest, excluding that building with my name on it, and all that stuff I already sort of control through my philanthropy. My leadership is going to fucking rock, you know what I did? I paid three million dollars to be in this race. The max donation someone can give you is $1000. I doubt Jane even knows enough people who have $1000, let alone the capacity to hand that out to someone that wants to give them a ticket for gunning it when the light is yellow. They say I am an old man, they say I am out of touch. Well, would a crazy out-of-touch old man give hundreds of thousands of dollars to a consulting firm that employs a lot of temporary workers who don’t actually support the cause they are campaigning for? Would a crazy man buy an election to make sure that low income housing isn’t built near the David A. Straz, Jr. Center for the Performing Arts? This town needs leadership damnit!

David Straz speaking to a ballroom of paid supporters

Straz motions for the tech guys to ‘hit it’ and a massive banner drops behind him showing off his logo and the fixed slogan, ‘How much money do you IMAIGNE.’ and the song Imagine, by John Lennon begins playing, but he cuts it off before 16 seconds so that he doesn’t have to pay licensing.