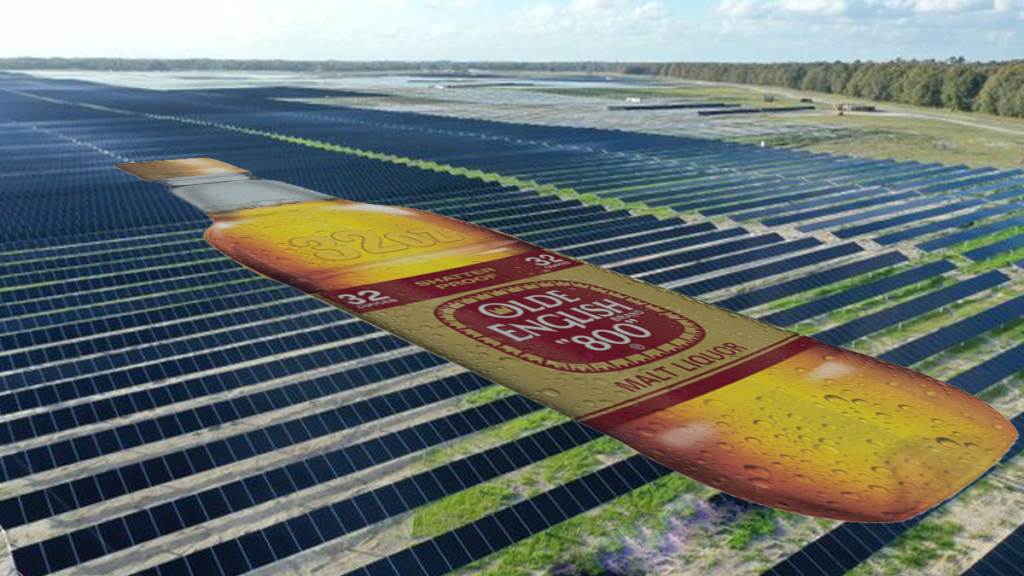 As part of a new partnership deal with malt liquor manufacturer Miller Brewing Company, Duke Energy has completed construction on a solar field shaped like a 32 oz bottle of Olde English 800.

“This solar field will usher in a new era of carbon-neutral energy production,” said lead solar panel installer for Duke Energy, Sophegs McGee. “Thanks to the smooth taste of Olde English 800, Floridians everywhere will soon see a better environment and cheaper electric bills.”

When asked if the partnership will make people want to drink cheap malt liquor, McGee said, “We sure hope so.”

A Miller Brewing Company representative gave a speech at the ribbon cutting ceremony, announcing that this field is only the first of many yet to be constructed.

“At Miller Brewing Company, we envision a future where anything can be a solar panel!” Screamed the creator of Olde English 800, Reginald MaltLiqer. “Pretty soon, every one of our malt liquor bottles will come packaged in sustainable, 100% biodegradable plastic and cardboard.  Our cans and bottles will also be made of solar panels which you can tape to your window while collecting and storing energy.”

MaltLiqer then took out a 32oz glass bottle of Olde English 800 and smashed it on one of the solar panels, officially christening the new solar energy collection field.

Duke Energy announced that while they will be collecting more energy in a cheaper and more sustainable way, electricity prices are set to soar for current customers who can expect to see at least a 60-70% increase in their next bill.

“We looked at our spreadsheets and determined that the people we service have no other option than to just go along with whatever we decide,” said Milly Duke, the current CEO of Duke Energy. “And fuck em if they want to use their own solar panels!”

← Bing Crosby estate admits ‘Happy Holday’ was the original battle cry; Crosby the first soldier for the War on ChristmasFirst baby to be named ‘Covid’ born in Tampa →