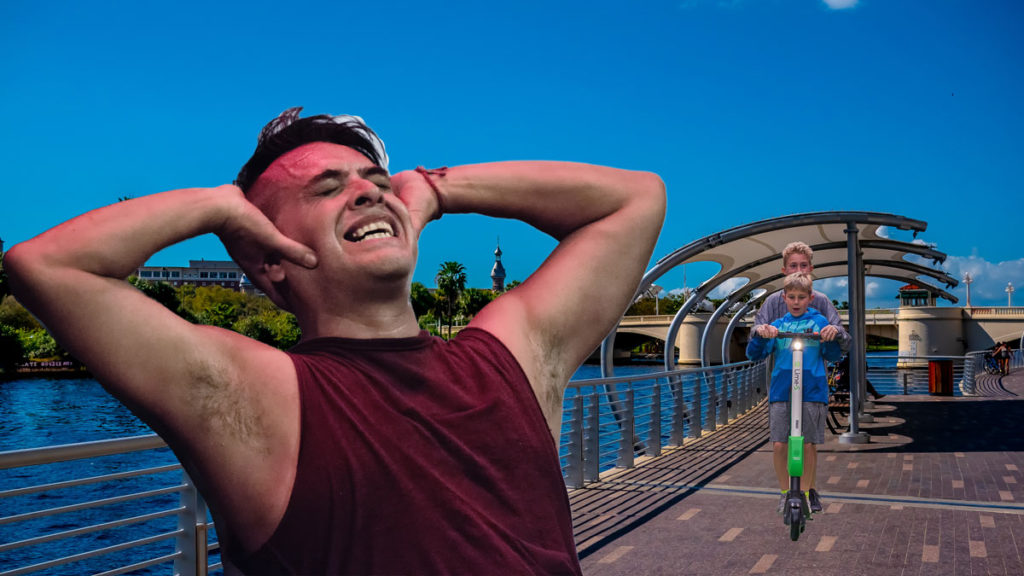 In only 2 weeks, E-scooters have already overtaken love bugs as the most annoying thing happening in Tampa.

The recently installed fleets of electric scooters have plagued the city, just as the love bugs did, however the scooters are even more intrusive and rage-inducing. Whereas you can swat bugs, and blow them out of your face, there’s nothing you can do about the guy in sandals and the backwards hat who is crossing six lanes of traffic during rush hour because he wants to show his babe the city.

Groups of people going nowhere but to inconvenience you, the masses of people zipping through the streets and sidewalks of Tampa has now gotten the town lividly annoyed. Based on a Welch’s polls of Tampa residents, E-scooters ranked first among things that annoy them, with love bugs now at 4th, behind “Traffic,” and “The Heat.”

Gangs of E-scooter enthusiasts have already formed, wreaking havoc on small sections of parks. “It’s perfect, because when the police show up, we just scoot away, or ditch the scooter altogether. You ever see the scooters just strewn about in the middle of the road? That’s us!” Proclaimed Net Bentley, Freshman at Pippleton High School. “We vape, we tag up abandon walls, we steal candy from convenience stores, and we ride these E-scooters around town, it’s pretty sweet.”

Bentley seemed very pumped about the thought of what he does with his gang, “We used to have razor scooters when we were slightly younger, but now that we’re past middle school, we’re almost adults, we understand the world in a way our parents and peers don’t, we’re tortured souls because of our intellect. We’re too smart for this world!”

“And too bad ass as well!” Chimed in one of his friends hanging out behind him in a fedora flicking the handlebars of his E-scooter.

“I think the scooters are wonderful!” said Aunt Clam.

“What’re you doing here Aunt Clam?” I said to my aunt.

“I heard you talking to your nephew from the porch and I wanted to come say hi!” She said to me.

“Your nephew, Net, I saw you interviewing him.”

“Yea… That’s why you came to Aunt Clam’s house to interview me, right?” Bentley said with child wonder.

“Yea…” I said unconvincingly. He went on to tell me all about the ins-and-outs of being in an E-scooter gang, including the secret handshake and the monthly dues he needs to pay, along with the perks of owning an E-scooter gang credit card which he tried to viciously sell me on for about 15 minutes before I eventually left the front porch of my Aunt Clam’s residence.

On my walk home, thinking, “Job well done, I just nailed the interview of a lifetime with my long-lost nephew Net Bentley,” with heavy sarcasm, I encountered one of the E-scooters laying in the middle of the road.

I was intrigued, I had never really looked at one up close so I inspected it a little bit. Picked it up like a toy with its grips, suddenly thunder cracked the sky with a loud, “BOOM!”

The sky went dark and it began to lightly drizzle, but I knew a monsoon was coming. I started to hear the faint sound of dogs barking, growing louder and louder, and I spotted a pack of wild dogs about six blocks away headed towards me, and they looked hungry!

I immediately pulled my phone out and jacked into the Kahwa Coffee Wi-Fi to download the E-scooter app. It seemed pretty easy. The dogs were about three blocks away now but I was still keeping my cool.

The thunder picked up and the rain began pouring. I took a picture of my credit card pretty hastily without really thinking about it and suddenly I was on the app!

The dogs were now one block away and I could see the whites in their eyes, rabid foam falling from their mouths. The heavens were now dark black, and rain was falling so hard it felt like needles on my skin. I was able to boot up the E-scooter and jump on it and began rolling down the road, dogs nipping at my heels, only steps behind me.

The rain basically felt like I was swimming on dry land if that makes any sense. I might as well have been in the ocean but I was not, I was on land, there was no difference in what I was trying to say.

The scooter took off faster than I imagined one of these things would go, I rocketed past the darkness and the dogs to now sunny Tampa Heights.

I could hear birds chirping and street performers whistling. I cut across six lanes of traffic to get towards my neighborhood with ease.

It was so smooth and peaceful, I was having so much fun! I saw a couple toking cigars on a couple E-scooters coming my way and I high-fived them both as they passed.

I couldn’t remember the last time I laughed like that! I felt such pure joy as I briskly arrived at my walkway and let the scooter fall to the ground, lifelessly, like the group shared piece of transportation technology it was.

I changed my mind and decided that E-scooters are actually awesome, and everyone should patronize the companies that have invested in our city, helping bring joy to our commutes.