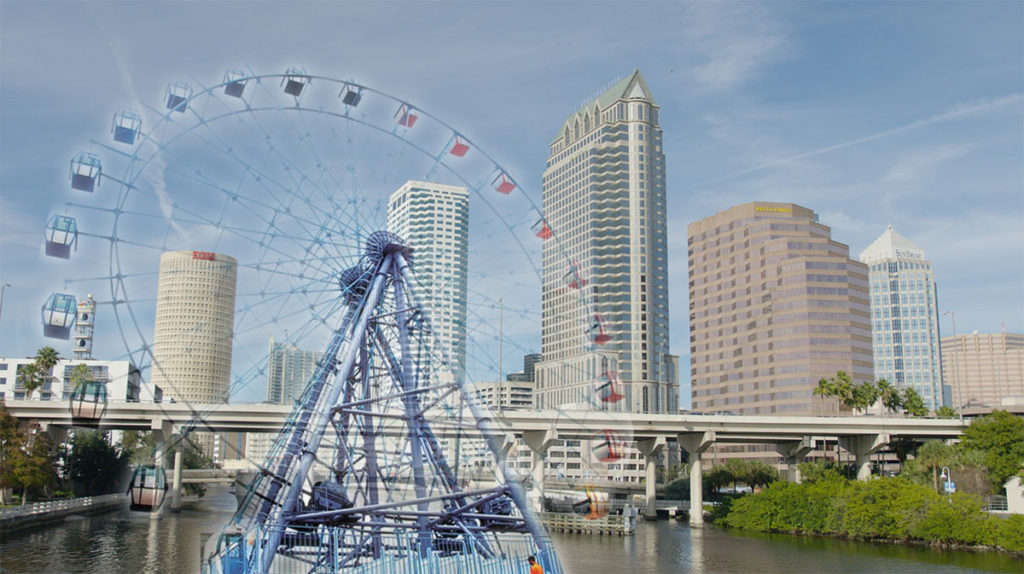 After the success of the once-again, flawless execution of the Florida State Fair, city officials are considering the Ferris wheel as a potential full-time form of alternative transportation. “The wheel goes round,” motions Kelvin in a circular pattern. “The bigger the wheel, the further it travels when it spins.”

Kelvin is one of the engineers at the fair, and spent the first 15 years of his life traveling with the fair and helping his family assemble the rides. “It’s amazing!” He gets excited.

“You realize we build up an entire city just to tear it down every few weeks and do it again? You know how much work that takes?” He tips his hat up, “And you’re telling me congress can’t work together?” He slaps my back as he has me laugh with him.

“This is a huge deal for us.” Says Victor Rodgeenus, official “ring-leader” of the circus branch of the fair. “If this deal goes through, we’ll officially have a deal with the Florida government, and those contracts are huge! We’ll all feel the effects, our giraffe needs a new neck tie, and this will be trickle-down economics at it’s finest! We have a ‘trickle-machine’ in tent 5 we’ve been wanting to upgrade!”

“Sure!” Vic says, as he graciously takes my hand and begins leading me through a back-tunnel series of tents all connecting with small slats. “You’re going to love this.” He says with a wicked smile.

He pushes me into a pit, where I fall at least 8-feet down, just short enough not to break any bones, but still feel pretty hurt and know bruises are coming. A freakishly human robot drops into the pit, leaving a crater at its feet, implying its construction material is very heavy, probably high quality as well.

The robots eyes lock onto mine. “I AM THE TICKLE MACHINE!” The robot chases me around the dirt pit while trying to tickle me. I let it get to me, and it’s surprisingly soft and refreshing touch sets me into a laugh-fit.

He laughs, “What the heck is a ‘trickle-machine!?’”

I go, “That’s what I was saying!” I dust myself off a bit. “Then why did you mention a tickle-machine right after talking about ‘trickle’ down economics?”

“Oh. Because we know the people up top will get most of the cut, so we’re hoping it trickles down to the rest of us fairly and we can upgrade our tickle machine.”

“Oh.” I respond. “Then I probably shouldn’t have wasted most of my time talking with you.” Vic looks sad. “No! Not that I didn’t like hanging out with you and meeting the ‘tickle-machine.’” I over-accentuate to show him I was listening and know it’s a ‘tickle-machine’ and not a ‘trickle-machine’ now to try and bond and show him that I didn’t take our time together for granted.

“It’s fine, JUST GO!” He yells at me. He turns his back. “It’s fine…” His hands slide across the top of his desk toward a half-drunk bottle of whiskey. “It’s fine, and it’ll always be fine. It’s just me and the ’trickle-machine.’” He pronounces it wrong on purpose to upset me.

“I’ve got to go.” I say. “But you’ve got my work e-mail so feel free to let me know if any other news-worthy stuff is happening, ok?” He’s silent. “Ok?” I repeat. He refuses to turn his desk chair around to face me. I wait another 15 seconds in silence before slowly turning and leaving Victor’s office. I look back one more time before the door closes behind me. He still won’t look at me.

(Sadly due to the amount of time I spent with Victor, I wasn’t able to gather many details about the city’s plan to implement Ferris wheels into daily travel. I’m assuming it’ll be some sort of bus system with different routes through different neighborhoods. Maybe new highway lanes specifically for the giant wheels. I’m not really sure, it sounds like a far-fetched idea as it is, and odds are it won’t make it past an initial vote.)