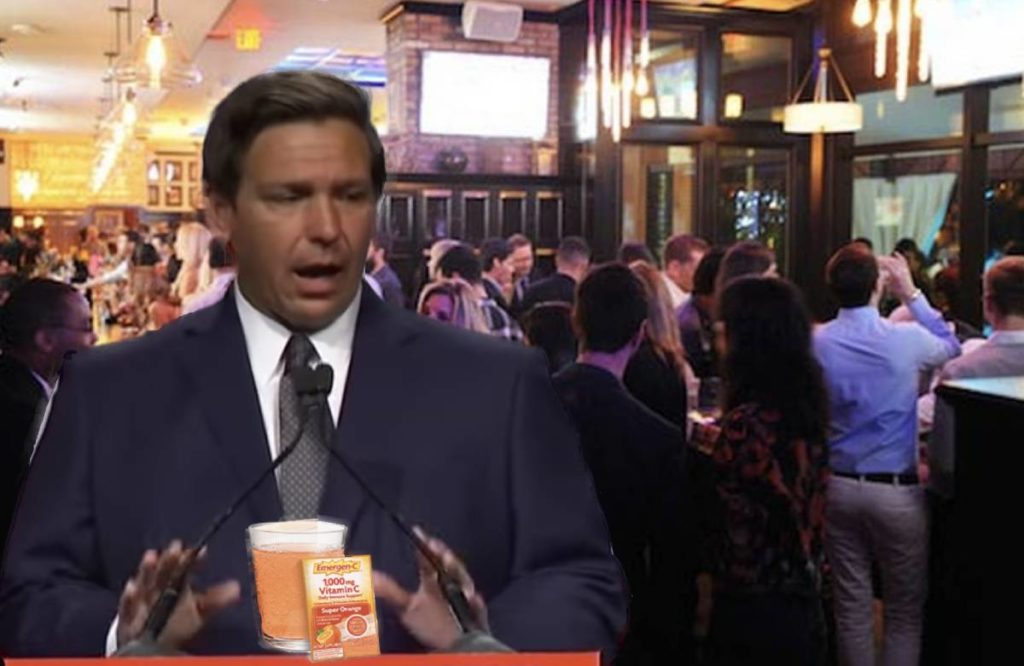 Speaking to a standing room crowd at Tampa’s most prestigious social club, Florida Governor Ron Desantis started by thanking the crowd and then coughed…for a while.

One of his aides rushed to the stage and handed him a cup of water.

He reached for the cup with both hands, brought it to his face, took a very animated, exaggerated sip of water and gently placed the cup down on the podium. He cleared his throat, smiled, reached into his jacket pocket, pulled out a little packet of Emergen-C® and gave it a little shake before turning to the audience and saying, “Folks, it is my pleasure to say, Florida is now a State of Emergen-C®.”

Governor Desantis proceeded to open the packet but it busted open and Emergen-C® dust scattered everywhere around the podium.

“Ah crap,” Desantis was heard saying away from the mic as one of his aides ran up with his backup jacket. After swapping his jackets and fixing his tie, Desantis continued with a laugh, “now where were we? Ah yes, let’s just say we aren’t gonna need as many taxes this year because I found us a little Emergen-C® money.”

“I genuinely do not understand what is going on,” says one man I spoke to who seemed to be part of the catering staff. “They told me I have to go clean up the mess [Desantis] made up there.”

Upstanding citizen and ex-convict, Crystal Metheny, was in the crowd as the governor gave his speech.

“I hope this means we all get free Emergen-C®,” said the 41-year-old woman who was arrested in 2014 for shooting a missile at a police vehicle. “I have been living here my whole life and love it, but I could really use some more vitamin C.”

At the end of his speech, the governor tossed some more packets of Emergen-C® from his jacket to the audience before throwing up a peace sign and exiting the stage.

Beginning March 1st, Florida official seals, documents and branding will include the Emergen-C® logo. As part of the deal that is set to save each tax payer in Florida about $0.12 cents a year, Florida residents will also be able to take advantage of a special 15% discount when they purchase any Emergen-C® product at Wal-Mart, Publix or CVS.

View all posts by Maggie Hyde →