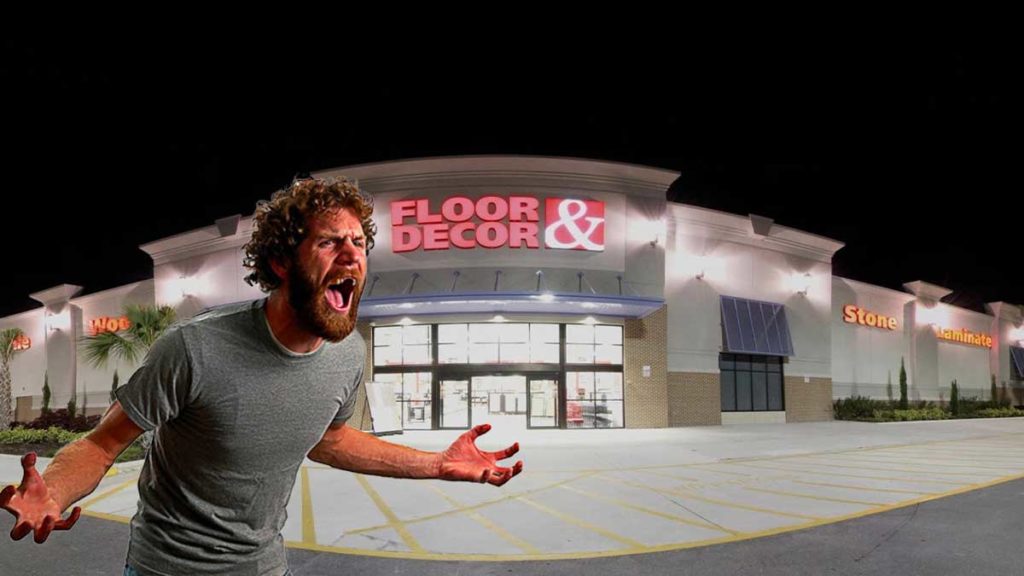 The Lakeland location of Floor & Decor was met with hostility today after a customer complained that they were not Home Depot or Lowe’s.

“I bought two boxes of tiles, but then I realized I don’t even own a home,” said Fenix Fartiano who tried to re-tile his trailer that he rents in exchange for cooking meth. “I tried to return the tiles to Home Depot and they said I didn’t buy them there. So I went to Lowes and they said the same thing.”

Fartiano was confused and began smoking some meth in front of me.

“The people at Lowes and Home Depot were nice though, they said if I had bought them there they would have totally refunded me,” Fartiano said before exhaling a massive cloud of meth in my face, causing me to get a second-hand meth high. “Then I remembered I bought the tiles at Floor & Decor, but when I went to get a refund they told me to quit smoking meth in there!”

Fartiano was now packing another bowl of meth, but I asked him he could do it a little further away from me because he was breaking the six foot social distancing rules.

Fartiano responded by calling me a second-rate reporter and telling me he was sleeping with my mother. I assumed it was just the meth talking and decided to go to Floor & Decor and ask them why they wouldn’t refund this meth addicts money.

“That man broke into our store last night and stole two boxes of tiles, then he tried to return for a refund.” Said the spokesperson for Floor & Decor. “We didn’t want to get the cops involved so we told him that we aren’t accepting refunds at this time because of COVID-19.”

← Isn’t this fucking Boring!?2020 Best of the Bay awards swept by one winner →