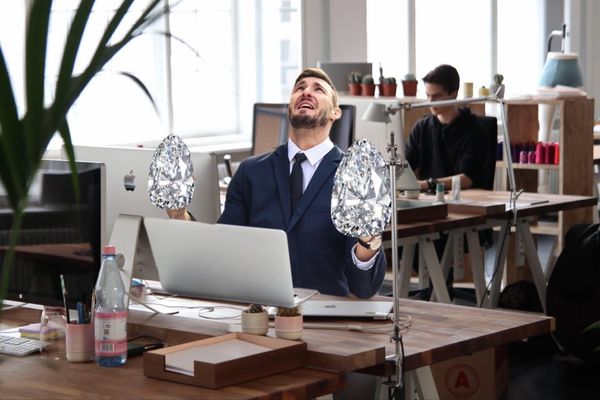 A man in Riverview, Florida, believes Reddit users like xXx_CatJizz_xXx, YOLO4DatHoleO, and The.Absolutely.Real.Chris.Conner.Who.Works.At.The.Costco.In.Fairfax.Virginia1 are being insensitive about his rare birth defect. On the “WallStreetBets” subreddit, users use the term “diamond hands” to refer to retail investors who hold heavily shorted stocks such as GameStop, AMC, and Bed Bath and Beyond without any regard for day-to-day profits or losses.

Chester P. Chatsworth has struggled throughout his life with a condition known as congenital adamantem manibus, or, in plain English, “diamond hands”. It is unclear what causes children to be afflicted by adamentem manibus, but research seems to indicate a link in a recessive gene passed on when at least one parent has paper hands, or chartam manibus. And, unfortunately, Chatsworth’s father, Fritz Chatsworth, was diagnosed with paper hands in the ‘70s.

“I remember watching the Apollo 11 coverage with my parents,” said Fritz Chatsworth. “And I said, ‘I’d like to be an astronaut, papa!’ And he just laughed and laughed. Then he told me, ‘Paper hands never go to the moon.’ That stung. But not as much as not being able to hold an egg without dropping it, much less getting to pick up my son when he was a baby.”

Chester Chatsworth laughed and added, “My life’s no picnic either. I went to a nail salon and the ladies started calling hardware stores. I just wanted a manicure! I can’t even cut my nails with those diabetic nail trimmers!”

“Until I came along, my dad never tasted chicken tenders, on account of my mom being vegan and them marrying right out of high school,” said Chester. “But, since I can hold a bag, I can get us some tendies.”

Fritz added, “We’re just people. Hilariously disfigured in a supremely ironic way that kind of makes you question what sort of cruel cosmic retribution you’re receiving, but we still have fun. We just don’t have fun at the expense of the less fortunate.”

Fritz limply pointed to a trophy on the mantle and added, “Paper always beats rock. But nothing beats my son. Not even my looseleaf, flimsy ass little hands.”