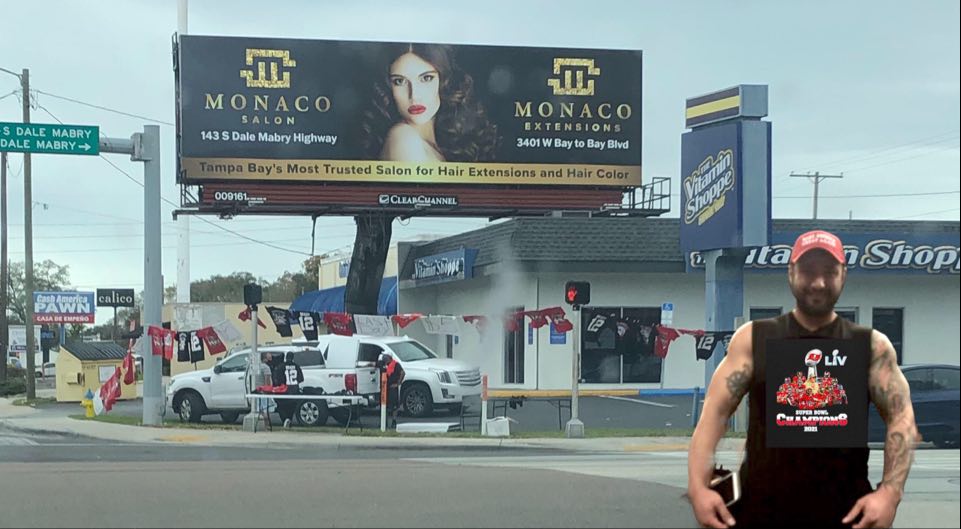 Yet another beloved chain of local retail stores has fallen victim to the struggling economy and will be closing soon.

Mike’s Roadside Merch will be joining the ranks of Burdine’s, Maas Brothers and others when its last location on the northwest corner of Dale Mabry and Kennedy in Tampa shuts down later this week.

The chain’s owner, Mike, shared some of the history of the chain that once boasted 36 locations around Tampa and was known for selling Tampa Bay Bucs Super Bowl souvenirs, Valentines gift items, fireworks and Christmas trees. “Well, my name is Mike and I sell merch by the side of the road. That’s about it.”

“People are already over the Super Bowl and I sold out of all my Valentine’s shit”, he said. “So it’s time to pack up the tent and table until the 4th of July.”

Most of the store’s remaining inventory consists largely of black t-shirts with the name “BRADY” and a number 12 printed on them, priced to sell for just $5 each.

I asked him if this was officially licensed NFL gear or bootleg junk produced in somebody’s garage and he replied, “Are you asking if I’ll put my boot in your ass up to my leg if you ask me that again? Because the answer to that question is yes.”

I then asked him if he has plans on what to do with any unsold product, such as send the shirts to children in impoverished nations.

“Maybe. Do African kids have PayPal? If not, fuck them.”

Mike’s Roadside Merch is open every day and will remain so “until I can get my brother-in-law to lend me his truck so I can haul this shit out of here.”