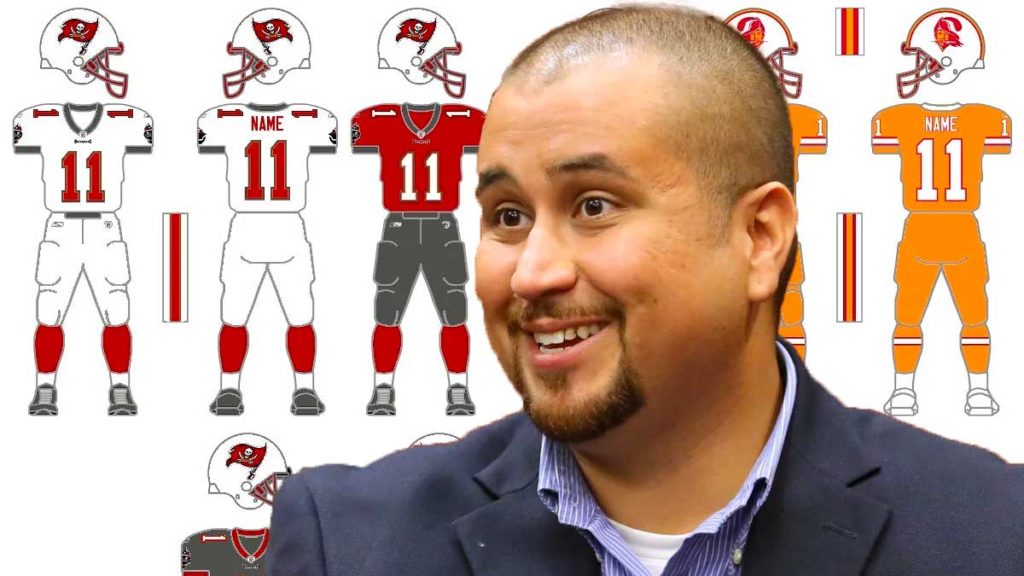 While taking a break from watching the trailer for the new James Bond film ‘No Time to Die’ on his phone, George Zimmerman took some time to show me his redesign of the Tampa Bay Buccaneers uniform.

“I have all these ideas in my head, and I get so anxious that I have to shoot them out into the world,” Zimmerman said while driving me around his neighborhood during one of his secret patrol sweeps. “Most of the time I never see anything out here, so I had a lot of time to research football uniform design and color schemes.”

Zimmerman then pulled his van over to a dark and secluded alleyway.  We got out of the vehicle and he led me to the back to show me his sewing machine station that he had custom built for the back of his van.

“Getting the design was only the beginning,” Zimmerman said while frantically removing his clothes.  “I wanted to prove to everyone that my design for the Tampa Bay Buccaneers uniform is not only beautiful, but practical.”

He then began to suit up in a wonderful pirate themed football uniform and grabbed a football.

“Go long!” Zimmerman shouted, causing me to run down the alleyway, turning back occasionally to see if he had thrown the ball, but he only kept signaling me to go further.

By the time I had reached the end of the alleyway I saw Zimmerman Hail-Mary toss the ball across the neighborhood only for it to crash through the window in the backyard of the house I was standing next to.

“I’ll get it!” Zimmerman shouted while playfully running up to the house.  I helped him hop the fence to the backyard and he pulled me up to the other side.

In the backyard we could see a woman sleeping on the couch of the living room inside.

“I’m going to have to strap up for this one,” Zimmerman said while pulling out his gun and loading it.

“Woah dude, I thought we were just showing me that uniform you designed.” I said, scared about what was about to happen.

“Look man, the gun is only for the off-chance that I don’t get my ball back,” he said confidently before going up to the window and knocking on it.  The woman sleeping on the couch woke up and recognized Zimmerman.

“George is that you in that beautiful pirate themed football costume!” The old woman said excitedly, “What are you doing out here so late? And who is your friend? Would you like some lemonade?”

“Thanks Ms. Reeses, my ball actually broke through your window.  We were wondering if we could get it back?” Zimmerman asked in a very polite way.

“Why certainly, my insurance will take care of the windows.” The old lady turned her attention to the broken window and football in her living room.  “This must be your ball.” She said while reaching down to grab it. “Now you two run along and be careful out there. You never know who is watching when you’re walking around the neighborhood. You wouldn’t want to get mistaken for someone planning to do something bad.”

Zimmerman hopes that everyone votes for his redesign of the Tampa Bay Buccaneers.