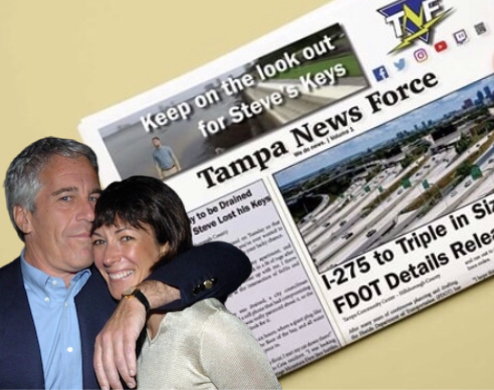 Before inevitably rotting in hell, Ghislaine Maxwell revealed while in federal custody, that her former confidant and notoriously dead billionaire, Jeff Epstein, was an avid reader of Tampa News Force.

“He would get notifications on his phone every time an article was posted,” Maxwell cried in the official audio of her interrogation.

“We would sit by the pool on his island and he would laugh and laugh, and I’d say, ‘what are you reading my diabolical evil genius?’ And he’d try to shoo me away he’d say, ‘no, no, it’s nothing, it’s nothing.’ He was very embarrassed of how big of a fan he was of the Tampa-centric satire. ‘Those guys are just so funny.’ He’d say.” Ghislaine then audibly dry-heaved, presumably at the weight of her impending fate.

Ghislaine also disclosed that apparently on his infamous island there was a whole separate wing of his main residence he called, “The TNF room” which was painted with the blue and yellow colors of the Tampa News Force logo, and he would have the TNF twitch channel playing non-stop on his TV.

“I would try to change the channel sometimes and he would shout, ‘don’t touch that baby G!’ He called me ‘baby G’ that was one of our fun nick names we had for another.” Maxwell rambled on, taking brief moments to scream and pull on her eyelids in stress of her soon-to-be demise whether it’s legal or due to foul play.

“I’m so freaking dead!” She shouted at one point, then you can hear a struggle ensue as she tries to stand up from the interrogation table, but is restrained by numerous officers.

Loud smacking noises are then heard as if she is being smacked in the face, by more than one federal agent.

The audio then goes quiet, and all you can hear is foot steps and whispering from a voice which is eerily familiar to Hillary Clinton. Then the rest of the interogation tape is dead air for 45 minutes until you hear a man enter the room and say, “Oh, looks like somebody did it.” Then yells from the room, “Boys, it’s done! Yep, get the bag, she’s toast.”

The current state of Ghislaine Maxwell is now unknown and whether or not she will face justice will be revealed in the upcoming days.