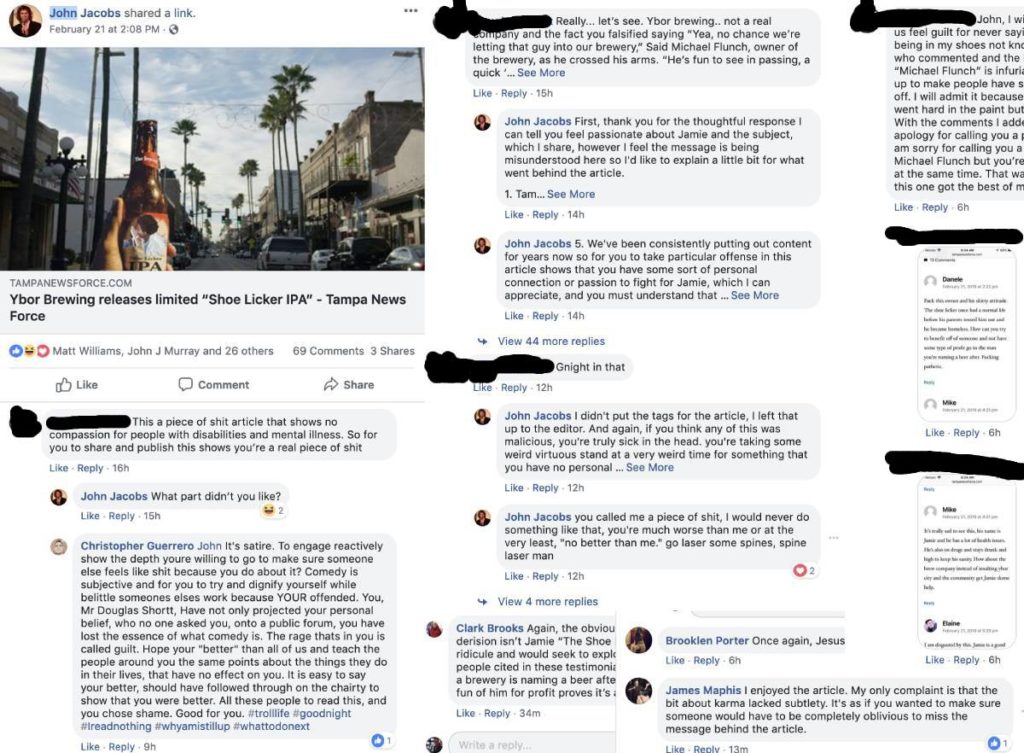 Between the hours of 1-3 AM on Friday night/Saturday morning, one [REDACTED] posted in the comments section of Tampa News Force journalist John Jacobs’ personal Facebook profile page, “This a piece of shit article that shows no compassion for people with disabilities and mental illness. So for you to share and publish this shows you’re a real piece of shit.”

After reading that, during a particularly rough night for Jacobs, he responded in a reactionary fashion, unlike his usual, professional, journalistic-integrity way, posting: “First, thank you for the thoughtful response I can tell you feel passionate about The Shoe Licker and the subject, which I share, however I feel the message is being misunderstood here so I’d like to explain a little bit for what went behind the article.

1. Tampa News Force does real news along with satire articles, this article fell under the satire category, and should be viewed as comedy. While you might think mental illness or Jamie’s specific situation is taboo or unacceptable to joke about, as someone with Tourettes syndrome and a deep family history of mental illness, I can tell you that comedy has been one of the most therapeutic things for me and anyone I know with mental illness.

2. I like the Shoe Licker and I’ve known him for many years, have shared meals with the man, and have done what I can to try and talk with him through his struggles and make the lightest of a dark situation.

3. If you looked at any of our video content you would realize that we are very active in the community and do as much as we can to highlight positive stories and show up anywhere that we are requested.

4. With satire, these “lies” are not lies but jokes, which are made very clear and obvious, we are in no way trying to portray these articles as fact, which I would assume is apparent based on the content of the articles. Everyone knows Michael Flunch doesn’t exist. You are the first person to assume otherwise. My characterizations of these people in the article represent the ignorant stereotypes people feel towards the Shoe Licker and the general blasé attitude toward our homeless problem.“

After going back and forth for an uncomfortably long time at a particularly weird time of the night, on a platform that two grown men (strangers) should never be communicating this much on, it was put forth by Jacobs’ to “Start a GoFundMe for the Shoe Licker,” not knowing that he would then in turn have to wake up at a reasonable hour and put forth effort to enhance another’s life, without the potential for personal gain.

The weird, toxic, virtue-signaling, woke-off had finally come to an end. [REDACTED] and TNF’s own Jacobs’, were able to set aside their differences and come together for the good of the community, and the shoe licker specifically, to work towards a charitable cause.

Since the creation of the GoFundMe, the Shoe Licker is now a millionaire! That’s right, the GoFundMe idea worked perfectly, and the shoe licker is no longer licking shoes. Now he’s licking hot sauce off his sterling silver fork as he sits atop the jet ski ramp on his houseboat.

That’s right, a man once known for the sole action (no pun intended) of, “licking shoes” (hence the name) is now a millionaire, and everything has worked in his favor. As for the unofficial Ybor mascot spot, that position will now be filled by the chickens temporarily as the city searches, in an “America’s Got Talent” style, to find the next intriguingly-unique combination of superhuman ability and circus act.

Actually, a GoFundMe for the shoe licker has not been created. I “lied.” Or as some in the satire industry would call it. “I joked.” See, whereas a GoFundMe for the shoe licker is actually a very good idea. [REDACTED] refused to apologize to Jacobs’ for calling him “a piece of shit,” causing Jacobs’ to refuse to work with [REDACTED] on starting a GoFundMe where they would match each others’ donations, all for the good of the infamous Shoe Licker.

The offer still stands to create a GoFundMe and raise money for the betterment of the Shoe Licker’s life, however Jacobs’ will not budge on his requirement for [REDACTED] to issue an official apology for his rude behavior. “I would never call anyone a ‘piece of shit.’” Jacobs’ says as he does hanging pull-ups. “I can’t work with someone who believes it’s a good idea to open up dialogue with insults, it just doesn’t sit right with me, and it’s wrong, despite the potential positives of this situation.” Jacobs’ finishes a set of 15 then jumps back up to do a few more. “I’m doing super-sets.” He says.

“I’d love to help out and make this right” Jacobs’ says as he starts jotting down some free-form poetry. “But that guy was mean to me. And I don’t like mean guys.” Jacobs’ looks very distraught.

Also, [REDACTED] is a “Spinal Care Consultant” who lives in Manhattan. Manhattan. All the entertainment in the world and you chose to spend your late Friday night arguing with a journalist in Tampa over a man known as “the Shoe Licker.”

This isn’t made up folks. This is the news.

(Seriously though, apologize for calling me a “piece of shit” and lets get to work.)

After talking on the phone for a half hour on Sunday morning, John and [REDACTED] worked out their differences. John plans to sleep on his couch and have a beer with him, next time he is in Manhattan.