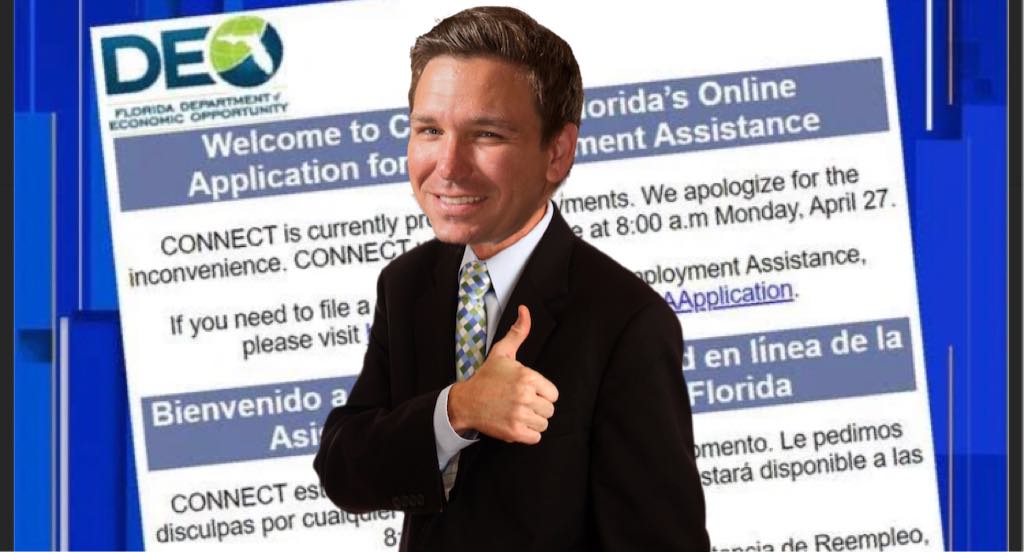 As the state-wide unemployment conditions gear up to become more stringent, Governor Ron DeSantis has made it clear that he will continue to receive benefits, despite being fully employed.

“My rules, my money.” DeSantis rudely shouted at the press core while he pointed his thumb at himself.

“I’m making it harder for everyone else to stay on unemployment because they’re a bunch of lazy bums, so I’m going to add some of that extra money we’ll have now to the large sum of money I’m already receiving from the Florida unemployment program because f**k you!” DeSantis said.

The requirements to remain eligible for unemployment will become tougher, forcing benefactors to apply for numerous jobs every week and show proof, but DeSantis thinks this is not a problem.

“There’s plenty of ‘good’ jobs (DeSantis used air quotes) that these lazy f**ks can get! Every time I go through the drive through at McDonald’s it says ‘now hiring!’” DeSantis slowly gazes over the entire media presiding over the press conference.

“What the f**k is wrong with you people!” DeSantis then spit at the audience. Large hawks of spit into the crowd, met with shrieks of terror and sadness.

“If I wasn’t on camera right now I would come into the crowd and beat the s**t out of each-and-every one of you myself!” DeSantis raged, continuing to get louder and angrier with each word.

“Ahhhhh I feel like I’m going crazy!” The governor screamed to the heavens. Then he ripped out his own hair with his hands.

“Ahhhh f**k! That hurts!” He reacted, staring at his hands full of his own hair almost in disbelief of what he had done.

His eyes rolled into the back of his head, only showing the gleaming white of his iris-less eyes.

“One day I will reach my full transformation and you will all regret not bowing before my throne!” DeSantis loudly, angrily yelled at the few remaining journalists who had not evacuated in fear of death.

Then a group of twelve-or-so people in white hazmat-looking suits hurriedly ran to the podium and escorted DeSantis off the stage and into a separate room where siren-esque shrieks could be heard.

How much exactly DeSantis will be collecting monthly from unemployment is still unknown.