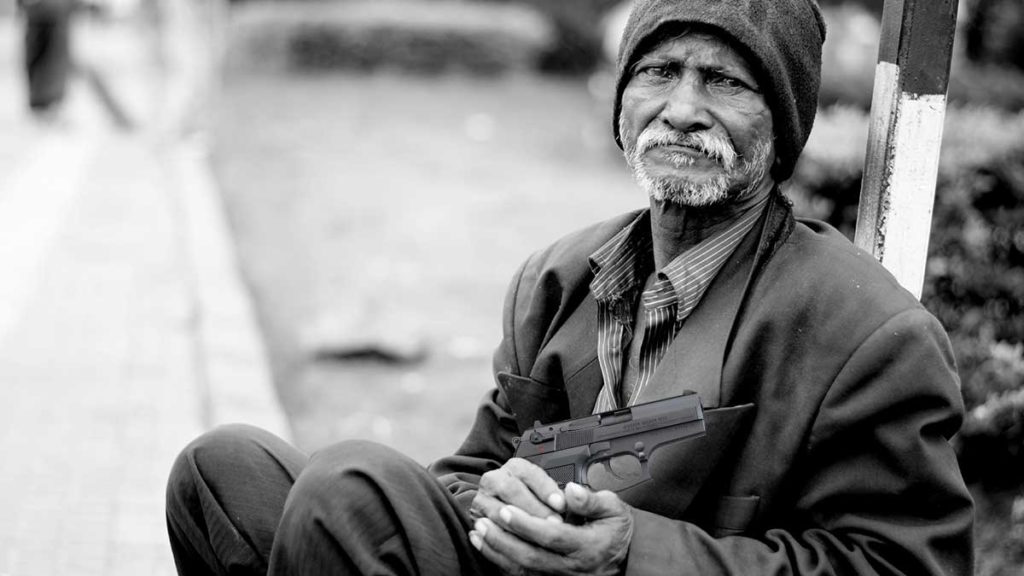 Controversial, “Handguns 4 Homeless” program has been activated in the Hillsborough area, official as of 3:35am this morning, putting police-grade pistols in the hands of the homeless population.

“We figured if we give the homeless people guns, not only will they settle their issues with each other, but it will quickly develop a homeless hierarchy so we can monitor and discover which homeless people display the most tenacious traits, and how they grow and adapt to the circumstances.” Said Police Chief Henry O’Hoolihan.

“Then, once the homeless have weeded out the weak amongst the communities, we’ll crown whoever’s left as government officers with legal authority to enforce the law around their neighborhoods making them the judge, jury, and executioner, in a Judge Dredd-style post modern Neo-dictatorship.” O’Hoolihan said.

“I’m sorry Chief you’ll need to slow down” I say. “My heads spinning.” I sit down and cross my legs. “This all sounds very complicated to me, and honestly I feel like I’m about to faint after hearing you say all that severely corrupt immoral stuff, especially at the highest level of our police force.”

O’hoolihan lights up a cigar in his office and turns to the window.

“Don’t act like you don’t know how the world works you Journy.” (Journalistic slur) “All you paper boys act alike,” (Another offensive slur) “You try to get the story and you act all ‘high and mighty,’” He does air quotes with his hands, “then you get surprised like you don’t know corruption exists! It’s the whole reason you were given a job Bozo!” He slams his fist in the table in intimidation as ash crumbles from his cigar, “To find corruption!” He pulls back and regains composure.

“Now that you’ve found some immoral practices on our part, what are you going to do about it?” O’Hoolihan says.

“Honestly, nothing.” I say.

“You’re right, I guess I am acting a little grandiose in the way I carry myself as a prestigious fake news journalist, and am acting like this isn’t exactly what I came here for. I came to find out about this malpractice, I came to learn about this abuse of power,” – The Police Chief interrupts me, “And I came in my pants!” The Police Chief soils his pants, “Oh no, that wasn’t come!” He yells.

“I accidentally just relieved myself in both ways and my pants are now wet and chunky!”

“Oh lord!” I shutter to the smell and utter grotesqueness of the situation filling my field of vision.

“This definitely isn’t making the story!” I say, confidently.

“I really hope it doesn’t, because this is just downright embarrassing!” O’Hoolihan says.

“Tell people all about my corruption and lies and deceit of the public and abuse of trust on all sides of the spectrum, but whatever you do, don’t publish the fact that I ‘doo-dooed’ myself in your presence! I’ve got an image to uphold!” The Police Chief says.

“How about this,” I say. “I won’t publish the fact that you defecated your trousers during company if you revoke the ‘Handguns 4 Homeless’ program.”

“Deal! Deal!” He anxiously pleas. “Whatever you want I swear!”

“Thank you so much!” He graciously exclaims.

Well folks, as you can tell, I decided against my better judgement and decided to print the fact that he relieved himself in front of me. Because it was just too good not to mention. So I guess the “Handguns 4 Homeless” program will remain in place. Hey, maybe it’ll work, who knows? Thanks for reading, I’ll see you guys in the next story.