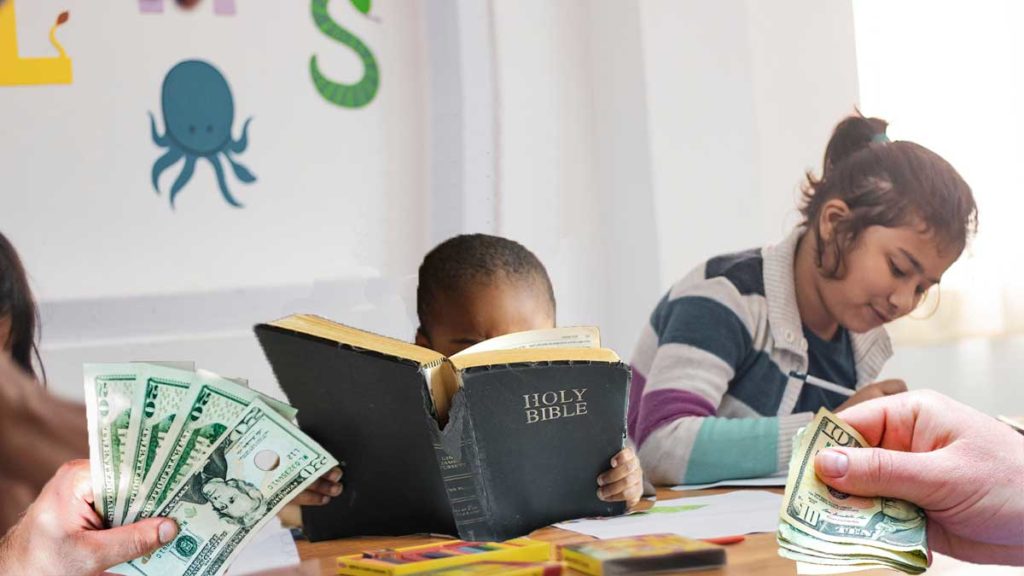 As the new praying in schools laws take effect, Hillsborough county is one of the first counties in the country to monetize the programs, having the teachers designate their prayers to a sponsor.

“For example, before class begins I will say something like, ‘Alright children, let us now bow our heads for the Best Buy prayer of the morning.’ Then I will go on and lead a prayer.” Said teacher at Hillsborough Elementary, Margaret Cumbucha.

“For the first week of the school prayers, we would just do it like any other, with a ‘Dear God,’ or an ‘Amen,’ but now every time we pray it must include a paid sponsors product to try and subliminally have the children associate these companies with the unbelievable power of Christ.” Cumbucha said before closing the door to her office on me.

“I’m sorry, I must enjoy my ‘me time!’” She shouted from the other side of the door.

“These kids really wear me out and if I don’t sleep for 16 minutes after I eat lunch I fall asleep on the train and end up in Darnestown.” I could hear her muffled voice from the other side of the door say.

The praying in schools bill passed when Florida politicians got blackmailed by a church that had video of them doing bad things. Like that show on HBO the Righteous Gemstones. Something like that happened.

The children must pray in class at least 5 times a day, and twice outside of school which is signed off by their parents every day. Children who refuse to pray will be held in in-school-suspension (ISS), until they comply with the new rules and pray on a stage at lunchtime for all the rest of the school to see.

If a child refuses to pray, he’ll be taken to a “non-believers” prison, where all the children who do not pray are forcibly reprogrammed through inhumane tactics. If that still does not sway the child to pray, a third step will be taken that is not public knowledge.

The child who is reportedly “praying the most” will win $17 million at the end of the year for their family to enjoy. The incentivisation of praying in schools may lead some students to pray insincerely, however that is not an issue the city or the new lawmakers seem to care about.

Now that the prayers are sponsored, a mass bidding war has begun amongst all businesses fighting for what they call is, “The sacred time,” and has proven itself as the most valuable time-slot for advertisers and prayers are now being sponsored for up to 30 million dollars, just for one weeks-run of a 45 second 7am morning prayer.

The success of the school prayers has led to a frenzy of legislators churning up as many new radical bills as they can that have the most marketing potential.

“Ab-vertisements,” is a large bill gaining mass popularity, giving police the ability to place a large sponsored placard over the stomaches of low-level felons.

Another proposal gaining steam would give advertisers the ability to sponsor significant court cases. “Chili’s presents the Turnpike Slasher trials LIVE!” Sponsors would also have the opportunity to cover capital punishments as well.

“Tats on Tots” is a bill giving businesses the chance to have their logo tattooed onto unclaimed babies. Left-behind children will now carry brands for the rest of their life under provision of this sexy new law.