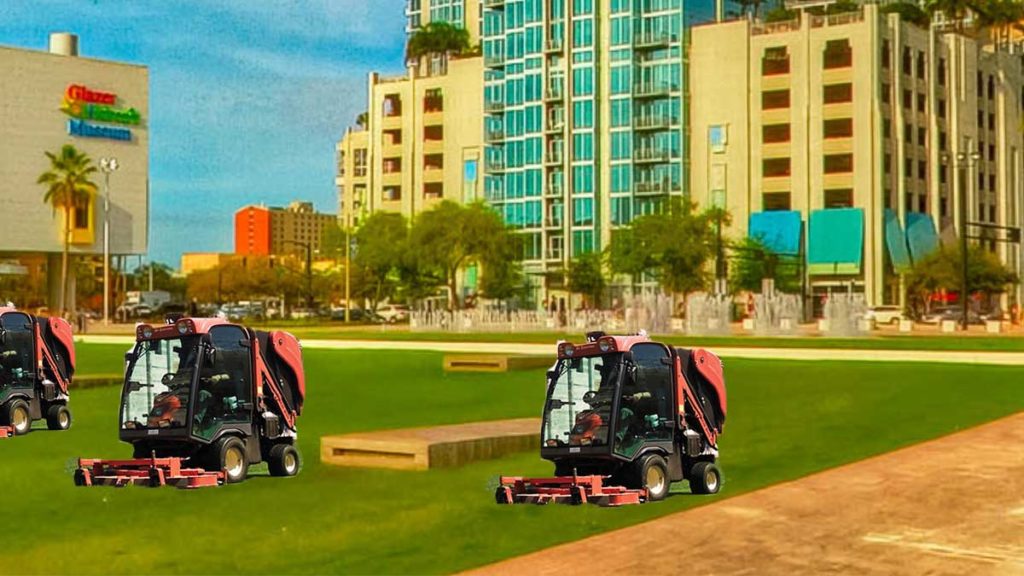 A series of lawnmower races at Curtis Hixon Park ended in major fines for the city, as damage done from the lawnmowers is estimated to cost tax payers upwards of $600,000.

Clive Bernard, the organizer of the “Rough N’ Tumble Lawnmower Races Derby,” claimed that it was the cities fault for not adequately preparing the park, whereas the city is placing the blame on Bernard, stating he, “Never gave any detail of what the event would entail, or if there were any special requests to prepare the park. This man is a con artist, and we’re fully prepared to fight for this money.”

Bernard, who inherited 15 riding mowers from a bankruptcy fraud case in his favor, has been running his lawnmower racing company for a few months now, and claims that all the other events he’s coordinated have gone smoothly.

“I’m telling you guys,” Bernard says slapping at a fly in the air, one of the flaps on his overalls falling down, exposing his nipple.

“Every other one I’ve done, has been totally fine. It’s this park, it just wasn’t built right for my kind of entertainment. My product is lawnmower races, and I know everything about these things.” Bernard says.

“I love these things like they’re my children,” He gets down and starts petting one of the lawnmowers.

“Sweet beautiful lawnmower. You do everything for me I need, and bring me so much joy. I just wish I could make you feel the way you make me feel. Like a man.”

Bernard gets up and begins beating his chest.

His antics garner attention and others around the park begin gathering around Clive Bernard.

“My names Clive Bernard! And I’m running for President!”

Everyone cheers, champagne pops, bubbles spilling over the people.

But then like, this big monster comes from out of the middle of the river, by Curtis Hixon Park.

The river monster and Bernard begin fighting in an epic way like Dragon Ball Z but also mixed with a Marvel superhero movie, like the best of both worlds.

I begin reading the rest of my briefing about the lawnmower accident from my journal I was given but forgot to read for my coverage of the story today.

It says that the lawnmowers were running over the cement and chipping the pavement, causing sparks spurring screams from the children.

“Now that’s funny.” I think to myself.

Nobody ever cares about my stories. They love Clark’s stories SURE. That’s fine. I’m not jealous about how much more famous my coworker has gotten.

His stories have been featured in the Smithsonian AND Time Magazine. That’s awesome!

But me? Noooo. Nothing for me.

Never anything for me right? Isn’t that how the saying goes?

“Nothing for me, and nothing for you, the only thing I love in life is shoes.” We all know that famous song. From Chet. Brevin X Chet, you literally can’t pretend you haven’t hard of him. OK Boomer.

Ouch. Don’t you hate that phrase. It’s worthless! Who cares! Did it hurt? Why? Idiot! Hahaha.

Anyways, the lawnmowers chipped the pavement, some kid got sick from trauma-induced illness after witnessing one of the mowers ride down the steps and slice a birds leg. The bird was rushed to Tampa General and surgery was down to recover the leg. The bird now has 115,000 Twitter followers.

I think that’s all the report says. There might be some pages missing I had to use paper to… Wrap some “stuff” earlier.

The $600,000 tax dollars needed to fix the park will be raised through a new douchebag tax, requiring all citizens who are douchebags to be taxed at 9% of their income. The city is expected to raise the money within a few hours once the tax is enacted.