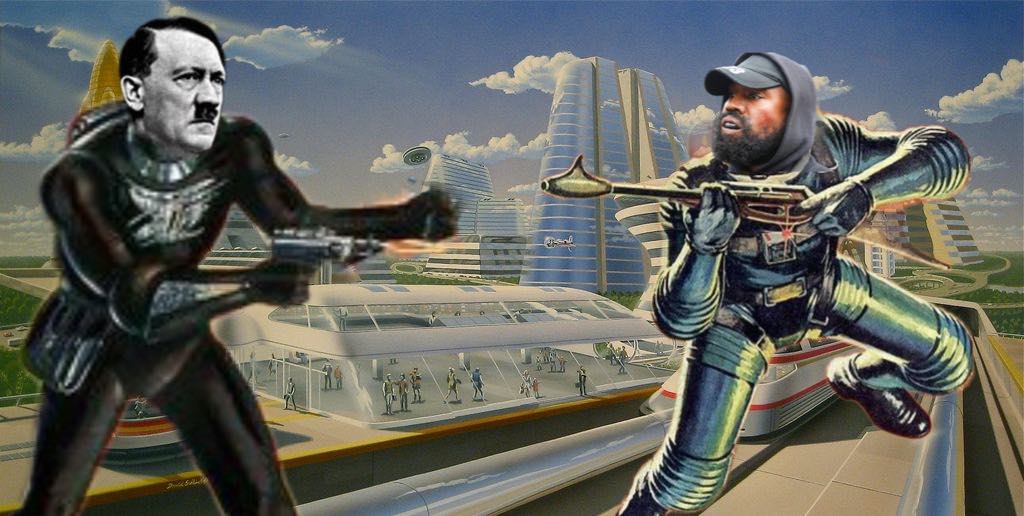 Adolf Hitler has appeared back in the public eye for the first time since the second World War.

Claiming he’s used a time machine to travel to the future to stop Kanye from making antisemitic remarks, Hitler explained, “You’re only allowed to travel to the future, that’s how the technology of my time machine works, and back in 19-something-something, you know, when I was doing my war stuff, I had seen a premonition in my dreams that a rapper/billionaire-fashion mogul named Kanye West was going to say anti-Jewish stuff, and I feel like if anyone could tell him the negative consequences of such actions, it would be me, so I used this Nazi-time-machine, to come to 2022 and stop Kanye from saying Jewish stuff…” Hitler paused as the hundreds of TV cameras broadcast him across the world.

“But I see I’m a little late.” Hitler blushed.

“We’ve been talking on a cellular phone for a while now and he’s been receptive to what I had to say and he even designed me a boot, so I’m hoping my words held water with him and he moves forward a changed artist and goes back to being some sort of inspiration or whatever it is he does in this time period.” Hitler delivered vivaciously to a deafening reception.

However, despite Hitler’s claims, Kanye West announced on his newly acquired “Parler” social media network, “Adolf Hitler is a Zionist who is trying to get me to conform with the Jewish mafia.”

So as to whether or not Hitler’s heeding was effective on Mr. West, we have yet to see.