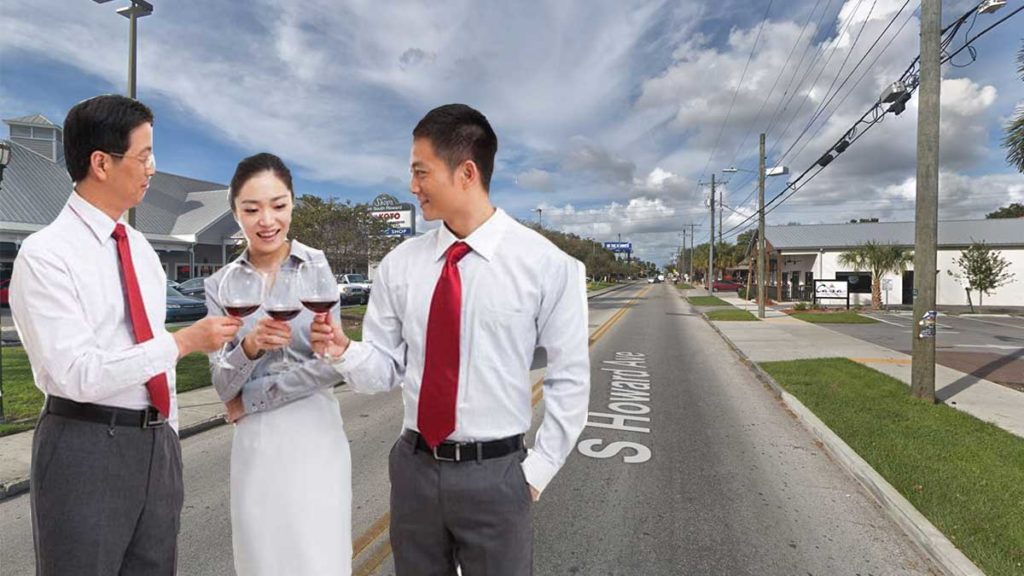 The entirety of Howard Avenue has been declared a “wet zone,” by the local government, giving citizens the right to consume alcohol in public without fear of prosecution by the law. Behavior that was once considered taboo or “only acceptable on Gasparilla,” will now not only be legal, but encouraged by the Tampa tourism board, along with the business owners on Howard.

“This couldn’t have come at a better time,” Said Frank Turner, Owner of the Turn N’ Burn back-alley bar located under the Chipotle.

“I recently lost most of my sisters money at the Hard Rock, and I couldn’t afford to keep paying off the cops catching the underage drinkers in my bar, threatening to take my liquor license which I inherited from my sisters ex-husband, but that’s neither here nor there,” Turner crosses his arms, “The point is I was in some hot water, and being able to sell my drinks out in the open instead of in the crawl space under the Chipotle, really kind of takes some pressure off me financially at least for the next few days or so.”

Turner activates the locating beep of a Lime scooter which is hanging upside down from a tree branch behind him.

“Well if you don’t mind, my ride is here, so I’ll be seeing my way out of this lame conversation with you.” He refills his e-wallet to pay for Lime tokens to rent the scooter, which takes about 35 seconds or so, but while he’s trying to get onto the scooter, another man walks up and tries to take the scooter away from Turner, grabbing one of the handles.

“Hey, what the hell man?” The guy says to Turner, who’s audibly upset as well.

“What do you mean, ‘what the hell?’ I was renting this scooter! I made it beep! It dinged for me!”

They start fighting, as handfuls of people begin to gather round.

“Oh no, not this again.” Says a man who’s drinking a martini behind a small patio, watching the fight from a few feet away. He downs his drink, hops the patio fence, then dives in the center of the fight.”

“Whoa, Marlin, what are you doing here?” Says the guy who’s not Turner.

“I’m not letting you get into another fight over some lame lime scooter!” The martini guy (I’m assuming Marlin), says to the man.

Turner sucker punches the martini guy and knocks him out cold.

“My husband!” Screams the other guy.

“You knocked out my husband!” He says, tears streaming down his face.

“Yea, well, you should have thought about that before trying to take my scooter!” Shouts Turner back at the crying man.

The man collapses to his knees and begins bawling.

The crowd has become enraged with Turner.

“Hey, it doesn’t matter who took the Scooter, what you did was messed up!” Chimed a voice from the crowd.

“That’s not right! He didn’t deserve that!” Another voice rang.

Turner, now stressed and panicking, frantically turning in circles trying to face and address whoever is jawing off at him.

“How about this.” He grabs the hand of the man who’s crying on his knees, and helps him up to his feet.

“Everyone who comes by my bar, the Turn ’N Burn under the Chipotle, can have a free beer.”

“What about me?” Says the crying man.

“Can I have 2, because you knocked out my husband?”

The man says, eyes wide, twinkling from the moisture of his tears.

“BOOOO!” The crowd rains down.

“Screw all of you! I’ll fight you all!” Screams Turner.

The mob closes in and pounces on Turner, as he throws haymakers wildly into the crowd.

Turner breaks his hand on a mans head, as numerous other fists targeted on Turner’s person land at their intended destination. Turner, who’s immediately rendered unconscious after the first wave of blows, is now being pummeled like a rag doll, paying back the debt of karma tenfold as he will surely be much more sore than the victim of his earlier sucker-punch.

“Hey Journalist, do you want to get in on this action!” Shouts one of the angry mob members to me from the middle of the beat down.

“It makes me uncomfortable, and I don’t think it should ever have to resort to this, however in a case like a man sucker punching another man who was simply trying to stop the fight, then yes, maybe it is fair to exact revenge in this moment to potentially teach him a future life-lesson about escalating tension when it shouldn’t be.” I say.

The mob member looks back at me.

Anyways, the entirety of Howard Avenue is now a “wet zone,” and all public alcohol consumption will be legal. Also, until further notice, the Turn ’N Burn will be closed. We don’t have much information, however we were told by an anonymous source, that Frank Turner is on the run, after paying for his hospital bills with his sisters credit card. Apparently his sister had to leave work early to find out that her credit card had been stolen, then when she got home, her pink tea cozy which hid the pile of hundred dollar bills was discarded, and the money was taken, and Frank kicked a hole in the bottom of his sister’s guest bedroom bathroom wall, because he was searching for hidden family-heirlooms. But again, we don’t have much information.