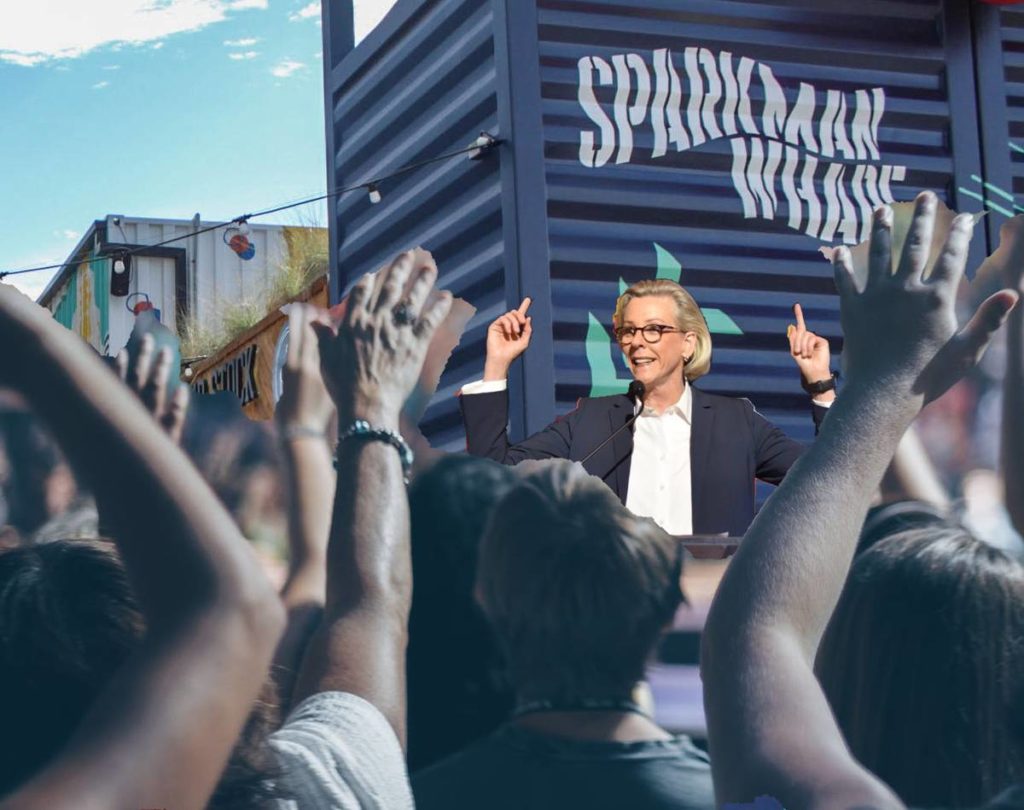 In an open endorsement of TNF, Mayor Castor admitted her fandom and appreciation of our organization in a noble and family-friendly way at Sparkman Wharf during a first-two-free-mimosas brunch event, briefing the citizens on the current state of the city, and her admiration of local satire comedy.

“Like literally, as hard as I try, I can’t believe I’m hosting a Tampa News Force-centric press event in the middle of Tampa’a most booming and non-threatening upscale open-air dining-hall style bazaar. There’s no way this can be real.” Castor demanded.

I thought it was weird that she was saying these things to me.

Why would the mayor be questioning why she’s doing something? And why would she be so curiously inquiring from me? None of this is adding up. There must be something wrong with the reality.

I check my reality bracelet, it glows green.

Suddenly a large shift in perspective takes place, and all of a sudden I’m seeing everything sideways.

“What in the ever loving Lord is happening?” I scream at the top of my lungs with all of my might.

“I am the cursed Rickter demon here to steal your soul!” Shouts a voice which is coming from a lanky red demon wearing a crown slipping through the cracks of an other-worldly portal or tear in reality.

I tap the green button to reveal a shoddy green piece of paper which has been covering a red light that is appearing on my reality bracelet.

“Oh my, no! It’s red! Oh no, no, no!” I start smacking the reality bracelet, and the world turns fuzzy each time I smack the bracelet.

I start smacking the bracelet each time the demon grabs at my chest, and it begins morphing his claws with whatever his mitts are near at the time. He takes a swing at me, and misses near a piranha tank sitting next to an oyster restaurant inside of a storage container.

SMACK *fuzz* the demon has now infused with the piranha tank, and it’s inside of his stomach.

“No!’ He screams as the violent fish devour him from the inside.

I jam one of those circle watch batteries into the side of the reality bracelet, it lights it blue.

“That means I can now choose to go back to my world, or live out the rest of my days here, in this alternate world which I’ve barely spent any time in.”

I look around at everything sideways one more time. Our confused mayor stands there wondering what’s going on. The entire brunch event audience is stunned at what they just witnessed.

“How are they supposed to continue their lives normally after seeing this?” I thought.

I looked at the reality bracelet. Then broke it.

The crowd looked at me stunned. More stunned than before.

“I don’t know anything about what just took place.” Squeaks up a voice from the back of the Sparkman Wharf diners, “But I think you just broke your only way to get home, fella.”

I laugh a little bit at the man.

“I didn’t really think about it… I kind of just went with my gut.”

Then I woke up with terrible gut pain, I had been having a nightmare after falling asleep at my news desk mid Taco Bell burrito.

“Oh shit the Cheetos in my Dorito burrito got cold.” I mutter as I scarf down the rest of my cold fast-food burrito, one giant pronounced munch at a time, slobbering globs of processed meat and caulk-gun-fired white sauces down the side of my face, landing smack-dab in the middle of the Nickelodeon logo in the center of my shirt.

“Fuck, not my Nickelodeon shirt.” I say.

“Whatever.” I brush off a pile of wet shredded beef from my lap.

I burp one more time really loudly, comically, like I’m playing to an audience of none.

I look down at the base of my computer.

My reality orb is glowing purple.

“One day I’m going to have enough money to unlock my reality orb and afford a reality bracelet, and then I’ll be happy.”

Then I went to the TNF-focused brunch event a Sparkman Wharf, and it’s boring, and nothing exciting or special happens, it’s just another day of Tampa News Force being celebrated by the masses for their stellar and uplifting art. Because that’s exactly what this is. ART. And if you don’t think so, you can stop reading… Or can you?