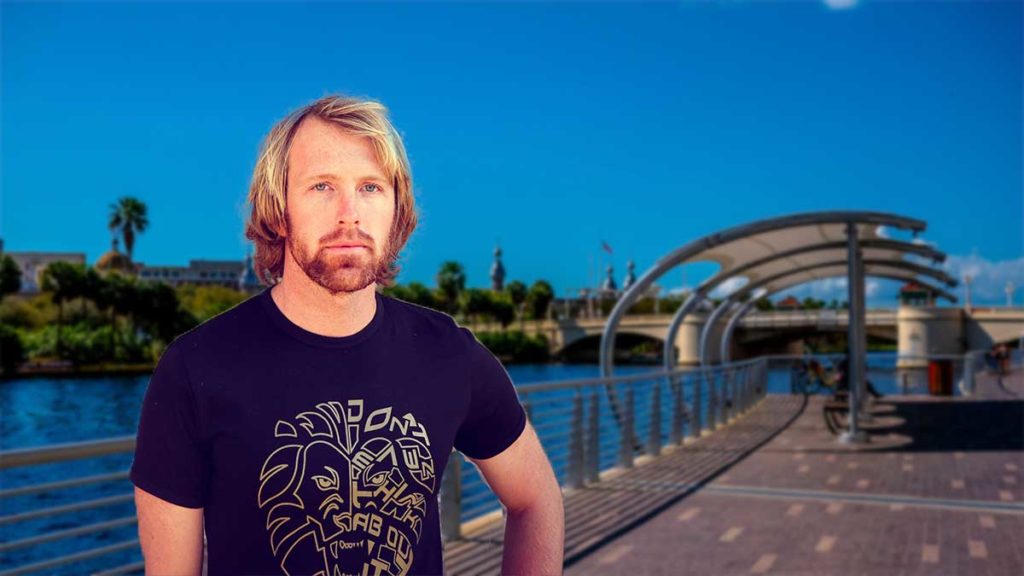 Behind the Tampa Museum of Art, a crowd had gathered to watch a possible miracle. A man who was convinced he was the second coming of Jesus Christ was going to attempt to walk on the Hillsborough River.

Prior to the attempt, representatives from the city of Tampa assembled to make a formal statement.

“Even though it’s called the Riverwalk, we can’t condone walking atop the river,” said a spokesperson for city council. “Nor can we condone a sprint, a run, or even a brisk jog on top of the river. It’s really not a matter of speed. Or even the act of walking.”

“What about power walking?” asked a concerned citizen.

The spokesperson turned to talk to his associates, and said, “I’ll have to get back to you. But, let’s err on the side of caution and not power walk the river, either.”

As the city representatives left the makeshift stage, a man in a pizza sauce stained robe from a hotel approached the podium.

“There are those who doubt that I am Jesus,” said Bud Langsford, owner of a longboard repair shop, which he claimed is “basically carpentry”, and originally from Buffalo, New York. “Some will say, ‘He just has long hair.’ I’ve always dealt with skeptics. I say to them, I say, ‘Thomas. Doubt not. I also wear linens, my mom was a whore, and, my birthday is kind of a big deal. The similarities are undeniable.’”

One of those skeptics was among the three or four people in attendance.

“Every man thinks he Jesus,” said Rhonda, an African-American woman who refused to give her last name to “some foolish ass journalist.”

“This is a disgrace! This man going into a river, pretending to be Jesus?!?” she added.

“Honestly, I’m just happy to see people exercising,” said Lance Drummond as he reached into a bag to grab another fistful of Doritos. “He’s going to get a lot of steps in. He’s an inspiration to us all.”

Also in attendance was Mrs. Abby Langsford, Bud’s mother and most devoted follower.

“I don’t know why he’d call me a whore,” said Mrs. Langsford, wiping at the corner of her mouth. “My little Buddy’s always been such a jokester.”

As Mr. Langsford approached the railing along the side of the river, police officers issued an order for the Tampa Water Taxi and several small fishing vessels to clear a path for the miracle attempt. Once all water traffic had been secured behind buoys, Mr. Langsford turned to face the crowd.

“Friends, countrymen, Tampans, I look to you as my loyal followers. And I say to you, behold! As I attempt to perform a miracle and prove myself to be the king of the Jews!” said Mr. Langsford, as he dropped his robe and revealed his tattooed body and crucifix necklace. “For I am the son of God, and I intend to prove that to you today.”

Mr. Langsford stood atop the railing, pulled out two cans of beer, smashed them together, poured the foaming contents of both Keystone Lights down his throat, and shouted, “Gimme a hell yeah!”

As the confused audience gave the self-identified scion a cheer, Mr. Langsford dove headfirst into the river. The gauze around his hands dissolved. Then, Mr. Langsford tried to stay afloat with a rapid breaststroke, but the water flew threw the holes in his palms. He quickly sank beneath the surface.

“Somebody save my boy!” screamed Mrs. Langsford. But, almost instantly, the bubbles stopped.

Mrs. Langsford broke down in tears, pleading, “Why?!? Why, Keith? Why didn’t you get our son to switch to vaping?”

The crowd quickly dispersed and Rhonda said to Mrs. Langsford, “Yeah, let’s see about that 3rd coming! How about that?!”