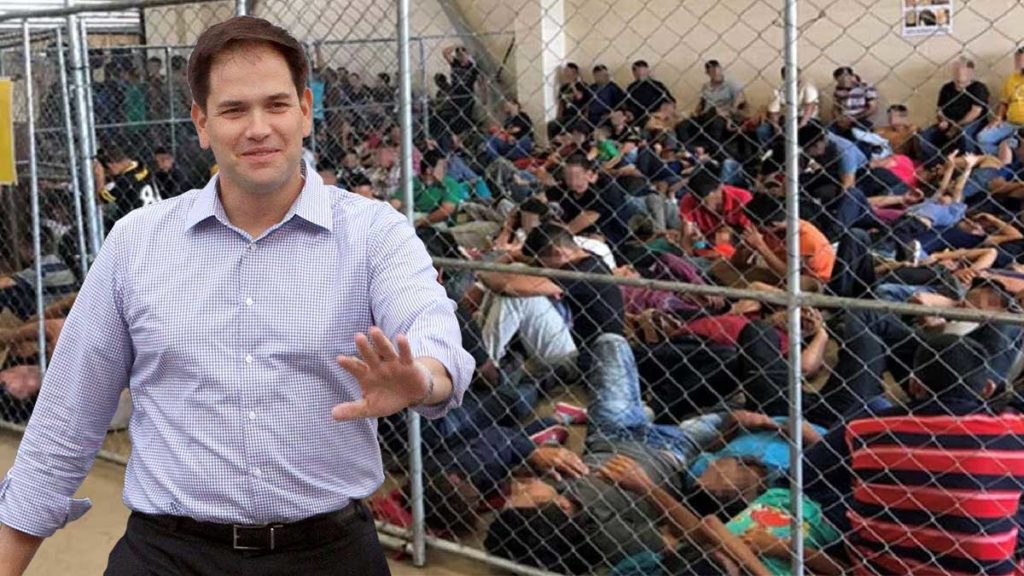 “After hearing about the awful conditions these children have been kept in, I wanted to see what all the fuss was about,” Rubio said while sipping from a cup containing a weird colored liquid. “Oh what am I drinking? I wanted to show everyone that the water here is clean, so I’m drinking the toilet water.”

Senator Rubio then entered a separate detention cage and pushed his way to the single toilet that the dozens of migrants had to share in plain view of each other.

“Excuse me, I would like some more of the toilet water,” Rubio said, shoving a little girl to the ground before dunking his cup in the toilet. “Ah yes, refreshing.” Rubio said, smacking his lips.

A loud scream echoed across the facility, peaking everyone’s attention.

“I don’t think we are alone,” Rubio said while trying to gather his security detail outside of the migrant cage.

The detention camp’s power went out, the lights flickered off and when the power returned, Senator Rubio stood in the center of a now empty cage while face to face with Senator Rick Scott.

“Jesus Rick, you scared me!” Said Rubio, who was now looking around and could see that he was alone in the detention center with Rick. “What did you do with all the immigrants?”

“You got a little something there,” Rubio said sweetly while looking Scott directly in the eyes. The two shared a moment, embraced and began to passionately make-out before Rubio pulled out a condom from his jacket pocket.

“I don’t know if I’m ready,” said Scott. “I’ve scammed taxpayers out of hundreds of millions of dollars, but when I’m with you none of that matters.”

“It’s okay,” said Rubio, “Unlike that Epstein guy, what we are doing isn’t illegal.”

The two went at it for a few hours, and I watched horrified from the corner of the detention cage. ICE raids are planned to start soon across Florida to refill the detention center.