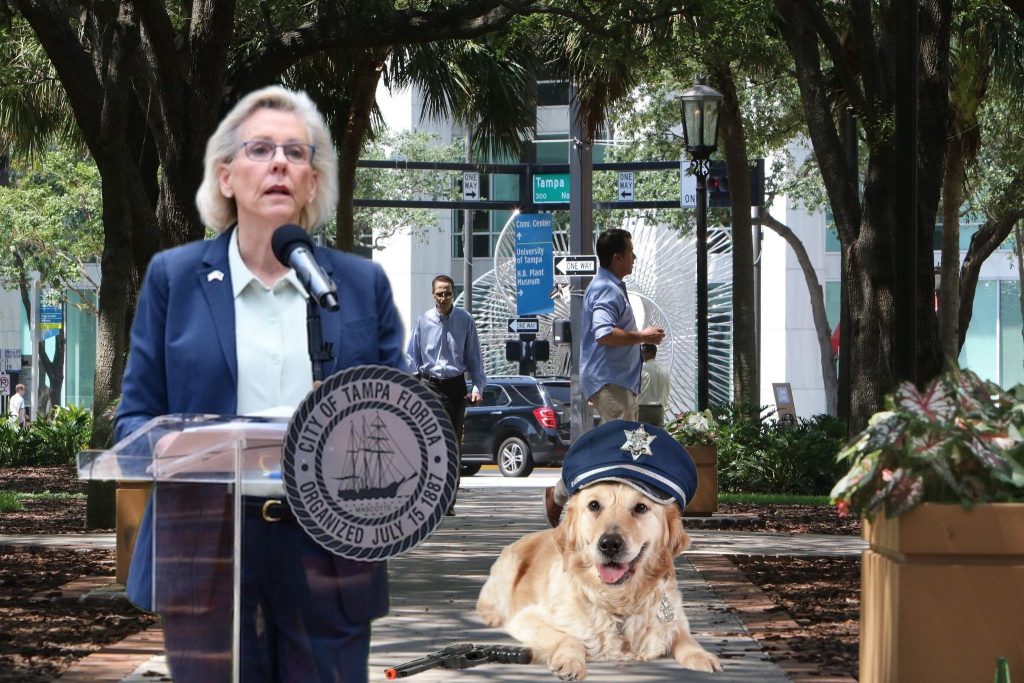 “I’m just a good boy,” said Lenna Delanada and a playful baby voice. Delanada is a Tampa native who entered her dog Ryker into the mayoral look-a-like tournament. “Look at this fluffy boy, he’s the closest softest thing to look like the Tampa Mayor Jane Castor.” Said Delanada as she aggressively brushed her dog in front of me.

Ryker was overwhelmingly voted to lead the Tampa Police Department in a Twitter poll conducted by Creative Loafing Magazine. The good little fluffy boy was then sworn in as Chief of Police during a ceremony at Downtown Tampa’s Lykes Gaslight Park.

After the contest winner was announced, Mayor Castor immediately protested the results.

“These people in that shitty website Tampa News Force are saying I look like a golden retriever!” Screamed Mayor Castor during her unhinged speech where she denounced the organizers of the contest.

I was standing in the press pool, pretending not to be part of Tampa News Force, even though I was wearing a signature custom blue suit with the TNF logo printed all over the interior.

She then continued her press conference, but a weird storm cloud came up and blocked the sun, when it passed the full moon had engulfed the sudden night sky.

Mayor Castor stared intensely at the moon. The temperature at the park dropped to a chill. Suddenly, the mayor began howling and screaming in pain as she animorphed into a golden retriever.

The animophed mayor then dove into the press pool and started sniffing journalist butts.

When she got to me she bit my left butt cheek.  I screamed in pain and watched as the mayor animorphed back into her human form.

“Using my authority as the mayor of Tampa, I now sentence you to banishment from the Tampa press pool,” said Mayor Castor, who standing naked in the press pool after animorphing back into a person.

I nursed my butt and walked back to the TNF offices where I had to tell the boss we were banned from covering future press events for Mayor Castor.

The Chief of Tampa News Force Entertainment has allowed me to stay on as a writer but my pay will be reduced by 20%.

The new Tampa Police Department Chief of Police has refused to comment on this story as he is a dog.