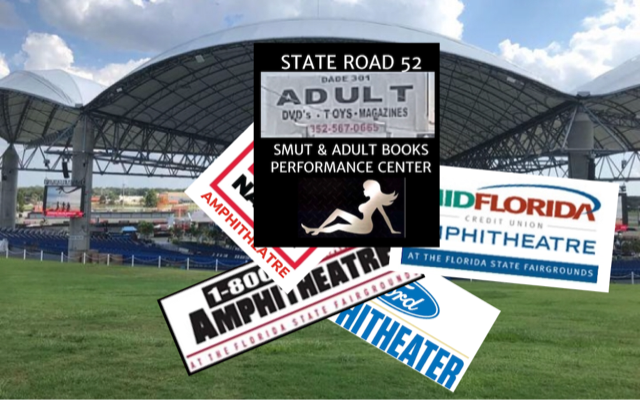 The former Ask Gary Amphitheater turned MidFlorida Credit Union Amphitheater officially has a new name after the rights have been bought by the Smut & Adult Books store on State Road 52 in Dade City.

“It’s a painful decision, but we have decided to sell the naming rights to the amphitheater” Said Brunswick Ocktun, Senior Supervisor for the MidFlorida Credit Union.

“We enjoyed being the sponsor of the performance space, however we accidentally Venmo’d a large chunk of our funds during an in-house poker tournament the other night, and Venmo is refusing to reverse the transaction based on our history of trying to reverse transactions, so we have no leverage with the digital currency exchange app, so we’re forced to sell our most profitable asset.” Ocktun sadly stated.

“This is a very strange situation and we’re not sure how it’s going to play out.” Said Tampa City Commissioner Ramsey Nucleosa, who I caught on her way out of the office, rushing towards her purple PT Cruiser convertible.

“I’ve really got to go, something… Happened in a different part of town and I can’t talk about it-“ Her sentence was interrupted by a loud unidentifiable screech from miles away, while a neon blue glow radiated from the area the screech came from.

“I really must be going.” She said, as she grabbed a metal briefcase out of her backseat, touched a button, then the briefcase transformed into a full suit of armor complete with ankle jet boosters, using propulsion to fire her off into the clouds, towards the blue blow.

We have no idea what happened in the area of the blue glow, but we believe it is unrelated to the name changing of the amphitheater.