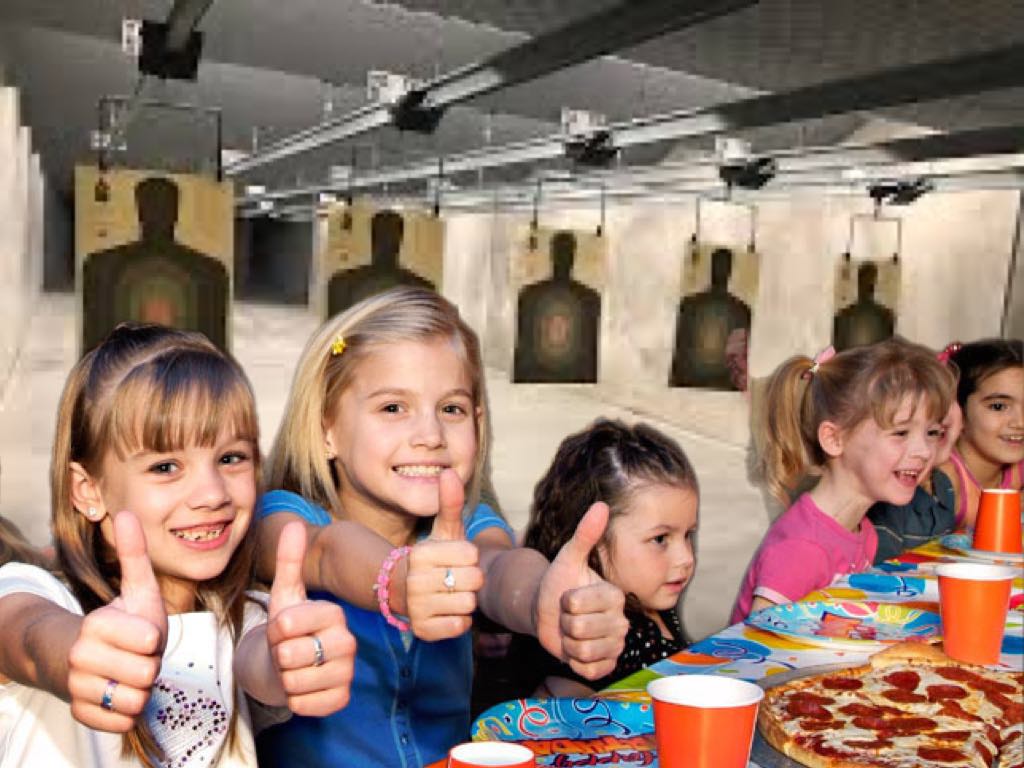 A new concept restaurant with a shooting range hopes to engage the next generation of second amendment rights activist.

“We want to be the Chuck E Cheese of guns,” said Barbie Bellie, founder of Pistol Planet. “In our restaurant we want children to hold a gun in one hand and a slice of pizza in the other.”

Bellie then offered me a slice of pizza.  I was impressed by the quality of the pizza, they use those tiny cupping pepperonis and fresh Wisconsin cheddar cheese that is trucked in every morning.  The dough is made in-house, and the tomato sauce is imported directly from Italy.

“We take great care to make sure the pizza is just as good as the pistols,” said Bellie, who then took me to the shooting range. “Children who want to shoot guns will be able to earn bullets by playing arcade games and collecting tickets.”

Kids are encouraged to collect as many tickets as possible so that they can rent out the bigger guns.

“We have every kind of gun that a child would want to shoot,” said Bellie.  “Personally, I would never let my children use a gun, but our target market is all about it.”

Bellie says she is very liberal and believes in the second amendment but admits that the more extreme right-wing families are the only people who spend money.

“Liberals don’t have kids or guns,” said Bellie. “They also don’t really eat pizza because they are all vegan and shit.”

Pistol Planet will also be providing delivery of their pizza through Uber Eats.

“It’s very good pizza, our wood fired stone bake oven was custom made by the world’s best pizza oven maker,” continued Bellie, who was now taking me on a tour of the kitchen.  “All of our pizza makers are Italian immigrants who were brought in just to work here.”

I told Bellie that I used to work in a pizza restaurant, and she invited me to make a pizza with the workers.

I jumped on the line and was surprised by how well the dough tossed.  I complimented the food manager for keeping the line clean.

While I was throwing my custom pizza in the oven, we heard a commotion coming from the dining/arcade area.

A group of teenagers had taken some guns out of the shooting range and were using them to hold the staff guarding the guns hostage.

I was very concerned that they would turn their attention to the kitchen and that my custom pizza would burn.

Bellie was calm and assured me that every gun was geotagged and could only work in the shooting range.

“It might seem scary now, but if they pull the trigger while in the dining room they will receive an intense electrical shock that will knock them out,” said Bellie.

This wouldn’t have been a problem but one of the teenagers got a hold of a flamethrower. The teenager proceeded to burn the entire restaurant to the ground.  Everyone managed to escape and after the entire building burned down, the only thing left standing was the custom pizza oven.

My pizza was still in there and I was able to still eat my custom pizza.  It was very good.

← Ron DeSantis sucks d**k to prove he’s not gayWhere are they now: The Island Boys →