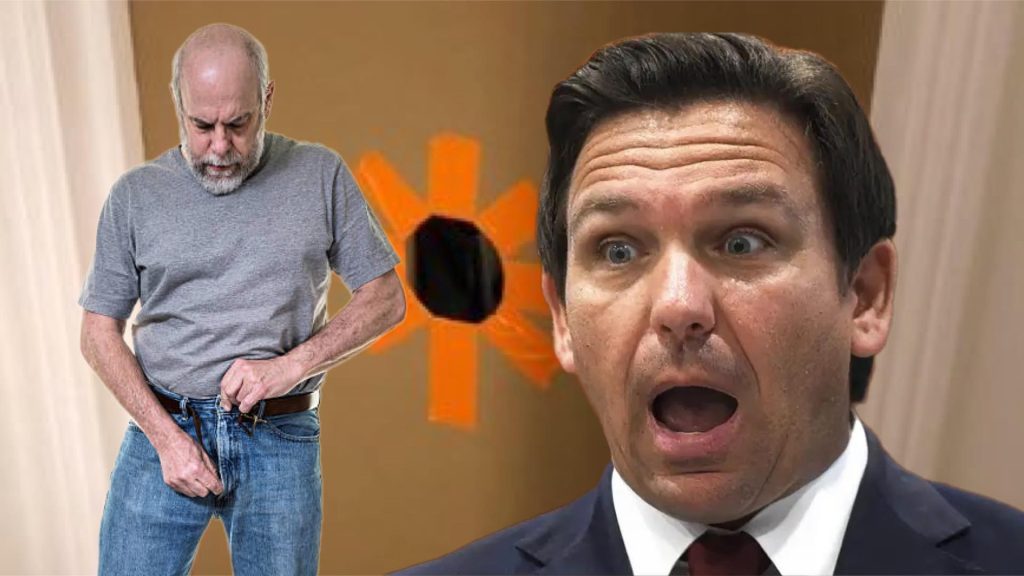 Governor Ron Desantis has made headlines again after publicly giving a blow job to a man during his last press conference to, “prove once and for all, that I’m not gay.”

After relentless cyber-bullying, accusing the Governor of being gay, DeSantis decided to take matters into his own hands by bringing a male sex-worker to his community and green energy conference and performing oral sex on him.

“I don’t like that everyone keeps questioning my sexuality, so I’ve decided to show you all how much I do not enjoy same-sex sexual intercourse, by doing something gay with a man and showing you my negative reaction.” DeSantis announced to the pressure of 400+ including a school field trip.

“I do believe now that he isn’t gay, after his viscerally ill reaction to that same-sex interaction. In fact, I would bet my life savings that he is a straight man.” Cunningham continued with a stern nod.

After finishing the man off, DeSantis stood up and said, “Ew! Yuck! That was disgusting! I hated that with every fiber of my being! That is the first, and last time, I will ever do that!” DeSantis said to a thunderous applause from the press.

“Wait!” A voice shouted from the back of the room, shutting up the crowd.

Everyone turned to see a small man in a suit adjusting his glasses.

“Who are you?” DeSantis asked.

“I’m the head editor of Straight Men Monthly.”  The voice said to a wave of collective gasps.

“It would be very beneficial for you if I could see with my own eyes that you are not gay…” The voice stated.

“I can’t write about you being straight in my publication if I have no visual proof that you are not gay.” The man firmly delivered with his arms crossed.

Then he began going down on the sex worker for a second time to mixed reactions from the crowd.

“You already did this!” One of the students on the field trip interjected.

“I filmed it on my phone, can’t I just send it to the guy from Straight Men Monthly?” The child asked.

“No!” Said the man who worked for Straight Men Monthly, not breaking eye-contact with Desantis.

“I must see it! Videos can be doctored or edited, I will not believe it unless I see it myself.” Argued the man viciously.

“Do it.” The student waved his hand to signal DeSantis to continue the sex act.

DeSantis brought the man to climax for a second time, to muddled cheers and half-hearted applause.

“There! That’s it! I’m done! I’m not doing it again!” DeSantis whined.

“Wait!” Chimed a new voice from the back, female this time.

“I didn’t see it! I was delivering a baby in the bathroom!” Said an unknown woman.

“I’m the President of the Women Lovers Union, and I demand you perform a sexual act on that man or I will not believe you are heterosexual!”

But this time when he went to perform oral on the sex worker, the sex workers penis popped off revealing it was a strap on and it was actually a woman.

The crowd was befuddled.

“It’s not what it looks like I swear!” DeSantis swore.

“It’s a woman! I tricked you! There was no way I could blow a guy in front of you all without being obviously full of joy! Damn it! Damn you all to hell!” DeSantis said, slamming down his notebook and exiting the room to a cold, tense, reception of confusion and titillation.

As of the current moment, it is still unconfirmed where DeSantis stands on the sexuality spectrum.