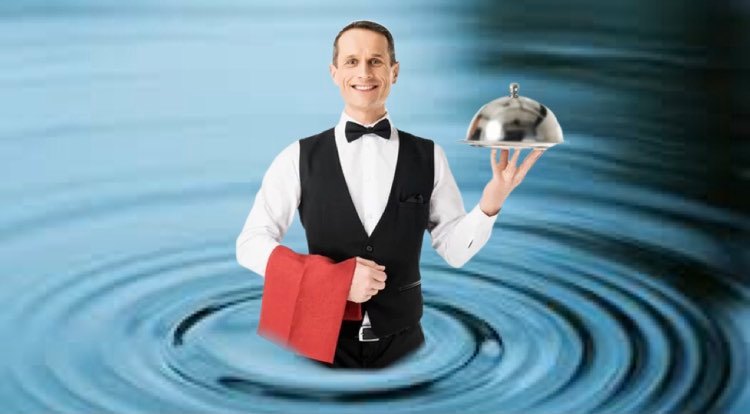 Good News, Gourmands! A new restaurant, The Crusted Tripe & Busted Pipe has debuted in Ybor City on the corner of 15th St and Ninth Ave, making it Tampa Bay’s first and so far only 100% flooded restaurant. No longer do fine diners looking for the classic “flooded restaurant date” have to go to Orlando, Miami, or even Atlanta for the irreplaceable je ne sais quoi of a flooded restaurant. Now there is one right here in Ybor city!

The restaurant purports they have spared little expense. “This isn’t one of those drip-n-sip barely flooded beer bars, this is a 100% flooded fine dining experience,” said owner Brenda Horsekiller, a Tampa Bay Native and seven on a good day. “Don’t worry, we even installed a watertight elevator so you will always be more than knee deep in murky water the entire time you’re here. That’s our promise. We guarantee that.”

The restaurant, like many fine dining locations, has a dress code. “Dress shoes, dress pants, and a jacket.” Said Horsekiller, frumpily. “We don’t want to be one of those flooded restaurants where you can cheat and wear shorts.”

Part of the unique ambiance of The CT&BP is the dynamic interplay of scents and flavors that inhabit the building. Innovatingly, any leftover soup is dumped directly into the wash of more than two feet of loose opaque water that occupies every single square foot of restaurant space. Picture yourself there. Lobster bisque mixing with day old hot and sour, miso particles brushing against the hair just above your sock. All at no additional cost to you, the distinguishing fine dining connoisseur.

“This smells exactly like the time my grandma’s house flooded in a hurricane and washed her dead dad’s ashes out the door to be lost forever. She didn’t talk for a week after that but it’s crazy how well a well-done theme restaurant can bring you back to the memories of your childhood,” Said local fine dining restaurant aficionado Jim Ass, who was just by himself and not on a date. Reportedly Mr. Ass was on his phone at the table with soaked through pants and lonely soulful eyes. He looked like he needed a hug but that is not my obligation as a journalist. Gross.

Said frequent dining guest and apparent makeup unenthusiast Connie Lindquist, “I love coming here cause this isn’t your run of the mill waterlogged casual dining environment; this is the only flooded restaurant on the eastern seaboard to have an outdoor flooded patio that isn’t already part of a pool or lake.  Not like the fucking Ramada in For Walton beach. Who wants to drink a cocktail in a pool outside—the same place where giraffes have sex.”

“Aside from those two toddlers who drowned in the coat check room,” said local questionable socialite Rick Dixkin, who confusingly had a ring on his finger (due to having horseface). “The restaurant could probably have better lighting. It’s like I’m eating in a flooded dungeon in here.” When probed further about the dead children who are no longer with us, Dixkin replied baldly, “Well, that’s why you don’t bring children to a fine dining environment. This will obviously read as an indictment on the presence of children in fine dining. Hell I’d drown myself if I was left alone in lighting like this and also could not swim. And what kind of parent buys dress shoes for a child knowing they’re going to grow out of them or have them destroyed by the water. I guess they won’t grow out of them in this case but still.”

“I wish we got paid more,” said waitress Harriet Busch, who had cans but not bazongas, “People don’t want to tip as much if they know they’re going to have to shill out for an UberWet.”

UberWet is an opt-in service Uber offers for transport from pools, beaches, flooded restaurants and flooded weddings which costs an additional fee depending on region.

One diner, Dick Cummings, who wore a Vietnam Veteran hat rather loudly, said, “I don’t like that this place only has a fancy gouda cheeseburger with bacon jam. If you’re going to have a cheeseburger on the menu just make a goddamn (sic) cheeseburger and don’t charge me thirty bucks for it.” When asked about the theming of the restaurant Mr. Cummings (sic) said, “Well yeah, I mean I like the water. It’s flooded. It’s a flooded restaurant. You’ve seen one you’ve seen them all. Did you write down what I said about the bacon jam?”