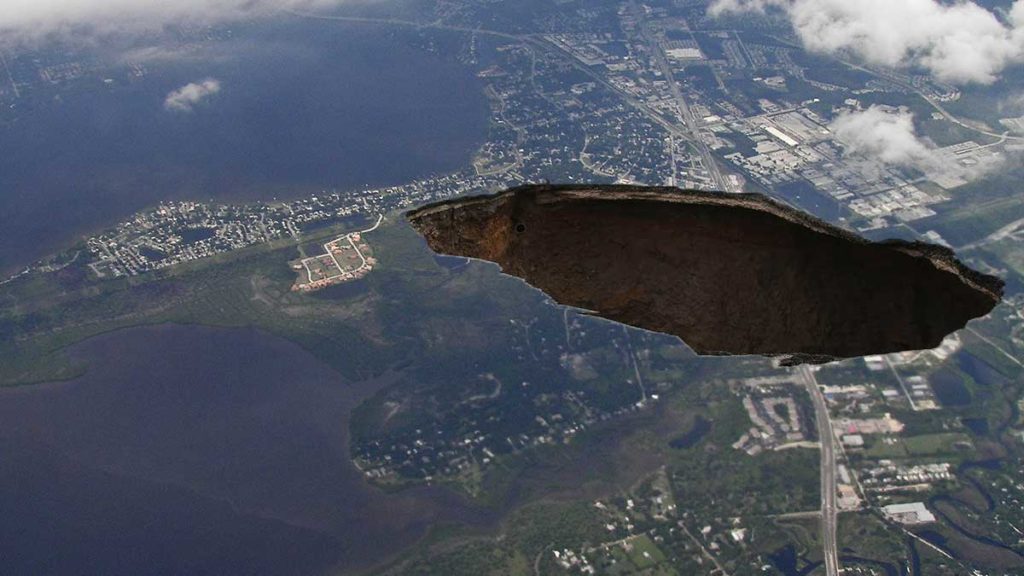 After some light showers brought intense flooding to the streets of Oldsmar, a giant sinkhole opened up and swallowed the entire town.

“I was out there recently because I have to cut through Oldsmar to get to Walmart,” said Wallris Bellymew, a Town and Country resident. “I thought the roads here were well taken care of, but no one ever thought about what’s underneath.”

Bellymew grew up in the area and gave me a tour of all that was swallowed by the sinkhole.

“You see how this street ends here and the hole starts there,” Bellymew pointed out into the hole. “Their used to be a really nice sports bar in a strip mall down there.” Bellymew then cracked open a Black Cherry White Claw and began chugging the hard seltzer down.  He offered me one while opening a second, but I refused his offer because I had brought a pack of Natural Light hard seltzer for myself.

We sat at the edge of the sinkhole drinking hard seltzers, staring down at the hole and tossing some cans in.  After some time the cops came to rope off the hole.

“All right guys, it’s getting late, y’all don’t have to go home, but you can’t be sitting here drinking hard seltzers all night.” The cop said to us. “Unless you’ve brought enough to share.”

We laughed and then Bellymew brought out a whole case of White Claw. “Oh you know I brought enough to share.”

The cop and Bellymew high fived and then they shotgunned a White Claw.  “I finished my last Natural Light Hard Seltzer and threw the can into the sinkhole.

As I said my goodbyes and headed towards my car, an empty can of Natural Light hard seltzer hit me in the back of the head.  I picked it up to inspect it and noticed it had my lipstick on it and that it was the can I had just thrown in the hole.

“This can’t be good,” I muttered to myself while looking out at the hole.

Suddenly a giant dragon came flying out of the sinkhole, launching dramatically into the air breathing fire and attacking a plane that was setting to land at the nearby airport.

The dragon easily overpowered the plane and dragged it back down with it into the sinkhole.

Bellymew and the officer started running towards me, yelling at me to get in the car and drive.

I tried to explain to the officer that I had a few of the hard seltzers and was having some coordination issues, but he yelled at me to stop being such a pussy and to drive.

As we sped away from the sinkhole, hundreds of dragons emerged from the hole and began to rain fire on the communities that surrounded Oldsmar.  My car wasn’t fast enough and was easily swooped up by a dragon that carried us away into the sinkhole.

Once we reached the floor of the sinkhole we were forced out of the vehicle by the dragons, who were now communicating with us telepathically.

“There will be many holes like this appearing in your community if you don’t change your ways,” screamed Mother Dragon in her native dragon language.  “Our dragon language is incredibly universal, while you may here loud screeches and guttural breathing, your brain understands what I say.”

Every person in the sinkhole began to bleed from their eyes and ears, listening with understanding as the Mother Dragon continued her speech.

“You will all be returned to your surface world, but if you don’t change your ways and start treating each other with respect, we will have no choice but to return and take back what is rightfully ours.” The Mother Dragon then unleashed a massive blast of fire that overwhelmed us all with its heat and light.

Suddenly we were all brought back in time to the moment before the sinkhole opened up.  Everyone in Oldsmar continued their day like nothing happened.