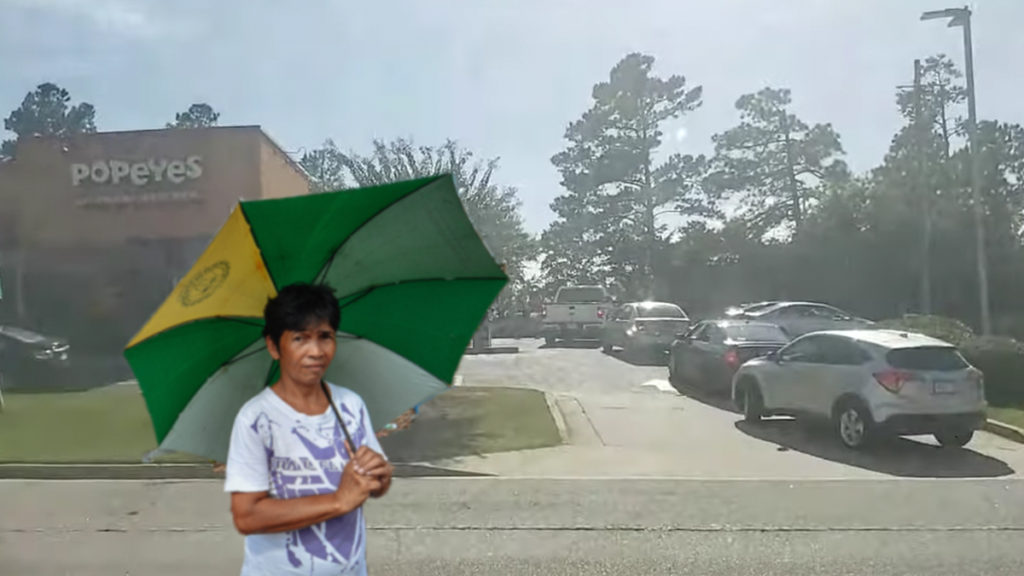 Local Popeyes have begun taking precautions to hurricane-proof their establishments in preparation for hurricane Dorian. Despite severe weather warnings, hundreds of customers are refusing to lose their place in line, forcing Popeye’s to accommodate their guests however they can.

The manufacturing of makeshift tents using Popeye’s tinfoil have been underway, however most employees have never made anything like this before, so the effectiveness of the efforts is yet to be determined.

“I’ve been making 65 sandwiches a day, and I know that doesn’t sound like a crazy amount, but trust me, 65 sandwiches a day is actually a lot, and it’s nonstop in there, and now I have to do it during a hurricane while also fashioning a biscuit bag that can be used as a floatation device in the event of hurricane floods? That’s an added extra level of pressure that I wasn’t prepared for when I accepted this position!” Said Keith KirkPatrick, head grill-master at the 46th street Popeye’s.

While there are no hurricane related injuries yet, some Popeye’s patrons have starved to death while waiting in line, refusing to eat at the McDonald’s across the street or the Taco Bell, also across the street.

“It’s OK, we just used those bodies as meat for the spicy chicken sandwiches.” KirkPatrick said.

“How do you think we’re able to have 8 people make 65 sandwiches each every day? That’s more meat than humanly possible! Unless you make the meat out of humans that is…”

KirkPatrick’s eyes widen on me and he begins licking his lips, drooling from the mouth.

“Stop looking at me like that Keith!” I shout.

“I’m not another human you’re going to turn into a spicy chicken paddy, that’s just not what’s going to happen today! It’s not my time!” I scream.

Kirkpatrick lunges at my feet, I leap into the air, coming down, landing on his hands.

I run out of the kitchen backdoor, but it’s actually deeper into the Popeye’s. It’s hundreds of possessed zombie-like workers all dismantling human bodies crudely, into a giant meat grinder that says, “Spicy Chicken Sandwich” on the side.

The zombies see me all at once and a slow loud roll of zombie voices begins to churn, louder and louder they get, maniocally paralyzed with rage for a brief moment before they all bolt towards the door right at me.

“Noooooo!” I scream, mid-turn, darting towards the actual exit as quickly as I can, stumbling over mop buckets and cashier counters, zombie hands reaching towards me every step, narrowly escaping each one by the threads of my clothes. Vile grunts and screeches echo from the zombie lungs, the sound piercing my ears uncomfortably like I’ve never felt before.

I burst through the front door, falling forwards, stomping firmly, trying to break my fall into a roll, zombies falling right behind me, scampering towards me with every bit of strength they have in their zombie bodies.

I come out of a roll onto my back, only to be met with a giant zombie pouncing directly on top of me. I shut my eyes and shudder with fear, however I’m never met with the pain of a zombie ripping me to shreds. I open my eyes to see the zombies are being pulled up into the hurricane. Dorian has reached the Popeye’s, and is sucking up all the zombies in its Gail-force winds, leaving the long line of customers watching in awe.

Still nobody moves from their place in line. They just watch me on the ground, reeling from my experience, attempting to holster myself to something on the ground as the hurricane continues to pick up everything in it’s path, besides the guests in the Popeye’s line who are actually being protected by a very cleverly fashioned towing line, that each guest has hooked onto, rendering them stable in line, unfazed.

I grab onto the branch of a ficus tree, as I’m turned completely vertical, being sucked into the tornado-like hurricane, fighting for my life. I begin losing my grip. The leaves of the branch are flying past my face, being ripped off, dozens at a time.

My fingers can’t grasp the branch any longer, and I’m pulled up into the hurricane where I see the hundreds of Popeye’s zombies waiting for me. They haven’t forgotten our past.

They begin swimming through the air towards me slowly, while I float helplessly, waiting for my impending doom. The hurricane passes over a Walmart, and suddenly hundreds of firearms are entangled in the hurricane winds as well, swirling around in a beautiful chaos.

I’m able to catch a gun as it spins, and just by my luck, it’s already loaded, with an extended magazine built to fire hundreds of rounds.

I begin spraying wildly into the wind, taking aim at any zombies in my sights. Bullets rip through their outterworldly flesh, leaving them truly lifeless, as they toss and tumble in the vortex of dangerous wind.

About 6 minutes pass and the hurricane completely stops, and I fall gracefully from the sky right down to the front door of the Popeye’s I was just escaping. The crowd of spicy chicken sandwich-goers still poised in line, waiting for the glorious moment, begin to applaud for me after witnessing the entire turmoil. They cheer loudly.

As I accept the graciousness they bestow upon me, a Popeye’s employee walks through the front door and says, “Now that the hurricane is over, and now that we have uh, ‘adequate supplies,’” the employee eyes the giant pile of ravaged zombie bodies, “we can now accommodate all guests and serve out those sandwiches you want so bad for some reason!”

The crowd cheers even louder than they did for my heroics.

Suddenly a fleet of limos pull up to the Popeye’s and well dressed people get out and take the places of the people who have been waiting in line.

“What the heck is this?” I think out loud.

“Oh this old chap?” Says an old British man in an all white leisure suit.

“We’re elite and we were paying those poor people to hold our place in line, so we could experience this awesome sandwich without the inconvenience of a treacherous wait.”

I look at him dumbfounded.

“It’s like an Uber app, see?” Says the British man, holding up his advanced smart phone to my face, referring to the large golden app icon that looks like a pyramid with an eye on top and a snake or some other shit I can’t really tell.

“So you’re telling me, there’s an app that will pay people to wait in line at Popeye’s so you can get the new spicy chicken sandwich?” I say.

“About thirteen dollars.” He says.

“Like, total? Or s that just the charge to pay the person to wait.” I ask.

“That’s just the charge,” He says.

“The price of the food is separate.” He says.

“Around nineteen something.” He says.

“But that’s besides the point.” He flicks a lit cigarette at my feet and laughs as he strolls into the Popeye’s to collect his bounty. As he walks in, the Popeye’s employee who announced the serving of the chicken sandwiches turns back to me as she lets the door close, and winks at me, but her eye is like the zombie eye in the thriller music video, so I know that she’s secretly also an evil zombie Popeye’s employee, which of course I should have figured seeing as I was just attacked by a huge pack of violent zombies from that same location, that would be the natural thought in this situation, but people were so excited by the sandwich announcement that they completely forgot about the fact that I was just CHASED OUT, AGGRESSIVELY. And I had to get into a one-sided gun fight in the sky just to try and protect myself. But I don’t think I want to go in and fight these zombies again. Because I just saw the elite guy walk in after he said some really egotistical stuff.