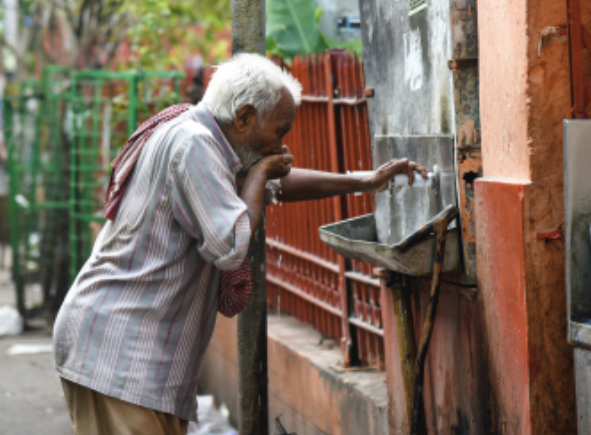 Construction has begun on transforming all public water fountains into bidets for the homeless as part of  the “High Life for the Homeless” initiative which will focus on bringing elite accommodations to the lowest financial bracket. The ordinance was voted on and passed unanimously by city officials after an intense courtship from lobbyists to local legislators.

“I don’t really understand the purpose or turning our public water fountains into bidets for the homeless” Said Chief Comptroller Wilbert Anakins, “However, the nice man waiting in the lobby knew my name and offered me numerous gift cards to local eateries as well as an unlimited supply of neck messages from his girl friend whom he claimed has all of her legal papers and is of age, so he didn’t have to tell me twice to get me to sign that dang paper. In fact, I didn’t even read the whole paper! There may be other things happening besides just turning the fountains into bidets, but what do I care! I’m rich and I’m over-the-hill! I’m only going to be on this planet for a handful of years more, tops!” Anakins then did the Lindy shuffle, tapped his heels in the air, then began whistling to himself as he breezed towards the outer doors of City Hall.

The renovation of the fountains has not been publicized, and there will not be much changing outside of a custom nozzle, so there’s expected to be mass confusion as citizens watch as homeless place their anus’s onto their once beloved water fountains, but there has also been a class held once a week at the Mohegan Sun Tuskegee Church on West 43rd street, that has educated the homeless population on how to address people who may doubt the authenticity of the High Life for the Homeless initiative.

“Only 3 people have come to my meetings at the Church” Said Daniel Craig, founder of the initiative, and A-list celebrity most notable as the star of the James Bond franchise.

“I started this to give homeless people a taste of the James Bond life, but honestly I think I should have put more thought into it. I’m scared all I’ve done is facilitated mass future fights amongst the homeless population and the non-homeless pop. (Population) Whatever, I’ll be gone by then working on my next film, ‘Craters of Neptune!’ A Sci-Fi romantic dramedy about racist aliens who end of fornicating.”

I stared blankly as Mr. Craig explained the movie.

“Whatever, you don’t get it.” He said, aggrivated.

“You small town bumpkin f**ks don’t understand good art anyway, no wonder so few of you jack-offs appreciate my High Life for the Homeless program anyway.”

Craig then jumped into a military jet that launched vertically through the use of propulsion jets.

City officials are urging citizens to look out for the new chrome nozzles on the water fountains specifying that it’s now a bidet, not to be confused with for the regular spigots which are silver.