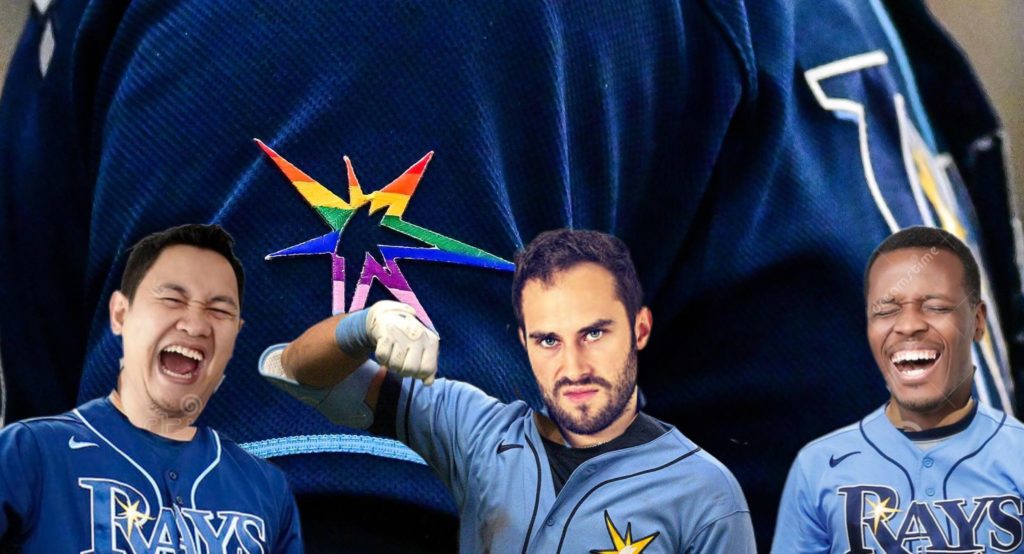 5 Rays players have quit after realizing that the word “Ray” rhymes with “gay.”

Jason Wedlock, the 5th baseman and chosen speaker for the group claimed, “We never thought of it.”

“As we were laughing about how dumb those rainbow Rays patches on the jerseys were, and how Jews killed our savior, we had a ‘coming to Jesus’ moment, where we all stopped and realized, ‘Oh no… Ray rhymes with gay. That’s too close. We can’t be here.’ So we immediately emptied out all our lockers, and threw away the greatest opportunity we’ve ever had in life because it kind of goes against something written in a book from thousands of years ago.” Wedlock firmly and confidently stated.

Then, one of the players standing behind Wedlock stepped up and began speaking because he couldn’t contain himself anymore.

“I was chosen to represent the group, we can’t have other players deciding to speak, it ruins the patriarchy we created amongst ourselves! It makes us look weak, and we lose our power! People respect us! The world knows we are right, and the gays are wrong! Gosh-darned wrong!” Wedlock screamed, as the press core began dissipating.

“Where are you all going, we have more to say?” Wedlock asked the exiting audience.

“We’re going to the gay club, we’re all gay. Journalists are mostly gay.” Responded one of the many gay journalists in the powwow.

Wedlock then began bleeding from the eyes.

“Shut up!” Abstinence yelled at Apartheid.

“Wedlock just made it clear we need to let him lead, or we will look weak!”

Wedlock slowly gained his whereabouts and picked himself up off the floor, wiping blood from his face.

“I’m actually gay too. That’s why I was so scared of it.”

The 4 other former Rays players behind him all looked at each other confused for a moment, then responded in unison.

Then all 5 of the former players partook in a homoerotic display of homosexuality.