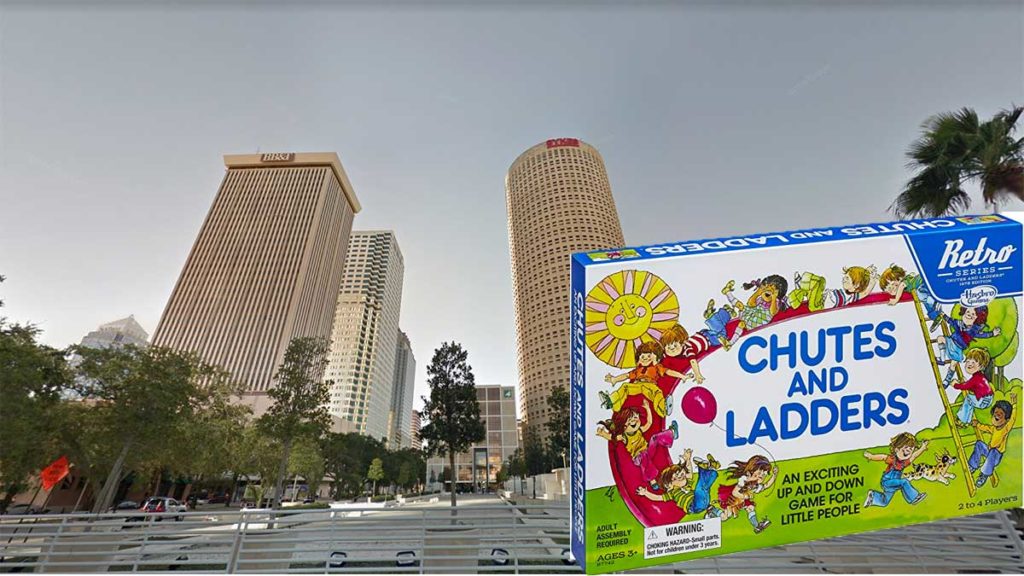 The streets of Downtown Tampa are about to get a whole lot more fun this weekend as the city is set to transform the Rivergate Tower into the largest game of Chutes and Ladders.

Participants will start at the bottom of the ‘Sykes’ Rivergate Tower, also known as the “Beer Can” and “Saints and Sinners Club from The Punisher movie with John Travolta” and they will have half an hour to climb dangerous ladders and go down random slides that will either set them back a bit, provide a shortcut, or toss them in a pit of snakes.

“We’ve transformed the Saints and Sinners Club from that movie ‘The Punisher’ with John Travolta into one of the deadliest real life board games imaginable,” said Visionary lead designer Kloertor Rombomby. “I loved playing the original Chutes and Ladders game with my family growing up, but the only problem was that the stakes weren’t high.”

Rombomby then pulled out a bong and smoked a whole bowl, blowing it in my face when he was done.

“People might actually die playing this, I rigged it so most of the Chutes end in poison snake pits,” he said before packing some more weed into his bong.

Before he could light it, I asked him if he had a medical marijuana card.

“Oh shit, this isn’t legal?” He asked in a paranoid manner.

“It’s not, and I’m a journalist so if you can’t provide medical proof for your weed, I’m going to have to place you under citizens arrest.” I said.

“Well fuck dude I’m from Illinois and we just legalized that shit. You can’t entrapt me like that!” Rombomby was now scared and trying run to the away.

I chased after him in the hallways of the Rivergate Tower.

He climbed a rather sketchy ladder and I followed closely behind him. When he reached the top, he grabbed a nearby basket of snakes dumped them on me while I still continued my ascent.

“Ahh snakes!” I screamed as the snakes hissed and hit me in the face, but I brushed them off and continued my climb.

When I reached the top I saw Rombomby about to embark down a chute before he said, “See you next flight!”

I ran to the chute and before I went down I heard what sounded like a basket of snakes hissing and tearing apart human flesh.

Being the scared person I was, I decided to take the elevator to the ground floor and head home.

The real life Chutes and Ladders game is still schedule to take place this upcoming Martin Luther King Day because not many people will be working in the Rivergate Tower that day.